"I withstood eight years of persecution, suffering, sorrow, cruelty, and sucking my blood with a straw."

Remarks made at prayer meeting for convicted MK organized by Shas Party. Leading Sefardic haredi rabbis in audience, do not object to remarks.

Benizri: Topaz suffered character assassination in media
Former Shas minister slated to enter jail soon tells hundreds of haredim holding prayer service for him, 'Every person, even if he sinned, has a human being, a life behind him'
Ronen Medzini • Ynet

About 300 haredim gathered Thursday in Jerusalem to hold a prayer rally for former minister, 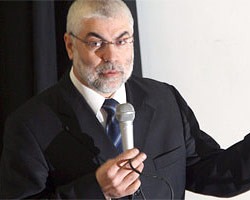 Shlomo Benizri, who will soon be entering jail. During the rally, Benizri rebuked the media for their coverage of entertainer, Dudu Topaz.

All the Shas leadership, some of whom made speeches, attended the prayer rally held in Or Hachayim Yeshiva in Jerusalem.

"One of the most popular entertainers in Israel, whose profession was to make people laugh, a very famous entertainer, and the media performed character assassination on Dudu Topaz, who ultimately committed suicide this morning in his cell," Benizri said.

"Within mere minutes the report reached the media. Even his children heard of the tragedy via the media. This is how I saw the cruelty that exists in this country," said Benizri at the beginning of his speech.

Benizri continued, "Every person, even if he sinned, has a human being, a life, behind him. I saw the cruelty that exists in this country." 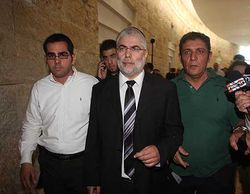 "If I look at myself and what they have done to me, woe is me. My poor parents can't withstand the pressure. My mother had two heart attacks. My father had a stroke. How long will evil people rejoice? They depicted me as an enemy of the people," he said.

"I withstood eight years of persecution, suffering, sorrow, cruelty, and sucking my blood with a straw," continued Benizri.

Benizri concluded his speech by giving voice to the sense of persecution spreading through the haredi public.

"Do a survey of people on the street (and you'll find that) people feel persecuted. They feel great pain. Leave us alone. We just want to continue upholding the Torah. We don't ask anything more. There is a boiling point to this story, just as it exploded last month in Mea Shaarim. We are not

looking for arguments and disputes. Let us live. We are loyal citizens. We haven't asked for extra rights," Benizri concluded.

Benizri is slated to go to jail on September 1. About a month ago, Supreme Court judges aggravated the former Shas minister's sentence after he was convicted of taking a bribe. Justice Edmond Levy explained that "the increasing corruption in the Israeli government institutions requires us to do something by setting a higher price tag."

Benizri appealed the Supreme Court, asking that the execution of his four-year prison sentence be delayed by a month and a half. He noted in his appeal that if he were allowed to enter prison later, he would be given the chance to spend the holidays with his 81-year-old mother and witness the birth of his two grandchildren, who are expected to be born during that time. In addition, he said he would be able to undergo some necessary medical tests.

His appeal was denied on the grounds that it is in "public interest" the Benizri go to jail on the set date.

"I withstood eight years of persecution, suffering, sorrow, cruelty, and sucking my blood with a straw."
Failed messiah was established and run in 2004 by Mr. Shmarya (Scott)Rosenberg. The site was acquired by Diversified Holdings, Feb 2016.