Rabbi, mentor of West Bank settlers and Israel's religious right, collapsed at his home in Jerusalem. 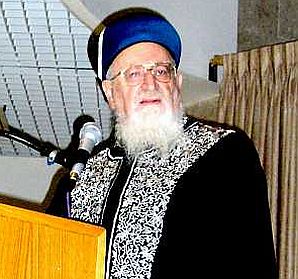 Former Chief Rabbi Mordechai Eliyahu has collapsed in his home in Jerusalem. Medical teams were rushed to the scene, however his condition remains unclear as of yet.

The Jerusalem Post adds that Rabbi Eliyahu was unconscious when rescue services arrived:

By ABE SELIG AND JPOST.COM STAFF

His condition remains unclear as of yet. According to reports, the rabbi, who has a history of heart attacks, was unconscious when the rescue services arrived.

Ha'aretz reports the 80 year old rabbi is in stable condition:

Former Sephardic chief rabbi Mordechai Eliyahu was hospitalized on Monday after he had fainted in his Jerusalem home.

Magen David Adom emergency services rushed to Eliyahu's home, gave him emergency treatment and took him to Shaare Zedek Medical Center in the city. The condition of the 80-year-old rabbi was described as stable.

A prominent Religious-Zionist figure, Eliyahu has suffered a stroke and a heart attack over the past 18 months, and was on a number of occasions in critical condition.

His health has improved lately, and on Saturday he gave a special sermon ahead of the approaching holiday season.

8:30PM: Rav David Vrazano, Rav Mordechai Eliyahu’s Shlita assistant, reports the Rav appears to be improving and is now undergoing a barrage of tests, hoping for good news on Tuesday morning. R’ Vrazano requests the tzibur continues davening for Mordechai Tzemach ben Mazel, adding those who can, are urged to come to the Kosel at 12:30am to take part in slichos with HaRav HaGaon R’ Yaakov Addis Shlita, adding it is best for one to bring one’s own slichos.

Rabbi, mentor of West Bank settlers and Israel's religious right, collapsed at his home in Jerusalem.
Failed messiah was established and run in 2004 by Mr. Shmarya (Scott)Rosenberg. The site was acquired by Diversified Holdings, Feb 2016.