Community Benefits Agreement would have seen plant's new owners and city government reach agreement on treatment of workers, other issues.

A CBA is an agreement between one (or several) businesses, workers and government. Community benefits agreements were used for the Staples Center in Los Angels and for public Wi-Fi in Minneapolis and have been used in the Bronx and in other cities across the country.

The city council initially passed a resolution calling for a CBA but then soon after, under pressure from Agriprocessors' new owners and the Postville Jewish community, the council passed another resolution against the CBA – a complete turnabout.

In email sent to a non-Jewish Postville community leader by Agri-Star's co-owner, Daniel Hirsch, Hirsch labeled JCA head Vic Rosenthal an antisemite and railed against the CBA, a source close to the issue said.

Rosenthal is Jewish but not Orthodox. 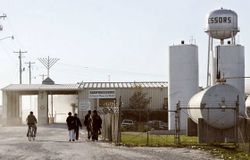 Members of Postville's Jewish community Jewish community have also argued Rosenthal is an outsider and as such does not understand the community's needs or Postville's.
Church leaders and Postville community activists are making another try to get the bill passed Tuesday night. The meeting is at 5:30 PM in Turner Hall.
Rosenthal declined comment except to say he is "optimistic" Tuesday's meeting will help all of Postville's residents understand that a community benefits agreement will be good for the entire town and will help all parties – including the plant and its owners – "come out better than they are now."
A Postville source told me Jewish community members also fear a CBA would block the plant's new owners from business involvement in residential rental property.
The Rubashkin family provided rabbis working at Agriprocessors with cheap housing at well below market rate. Jewish families often paid significantly less for well-kept homes than Latino workers paid for smaller, older, poorly maintained properties.
If made part of the agreement as is rumored, removing the plant and its owners from the rental property market means Postville's Jews can't get this (untaxed) benefit now, and it can't get it later if and when the Rubashkin family regains open control of the plant.
Treating non-rabbinic workers better may also be perceived by some in Postville's Jewish community as a recipe for shutting down the plant. The idea is, any extra cost paid by management pushes the plant closer to closing. Some may also fear any extra money paid to non-rabbinic workers might mean less money paid to rabbis and mashgichim, kosher line supervisors.
That point has been echoed – or, perhaps, originated – by Kosher Today and its editor Menachem Lubinsky. Lubinsky, who owns Lubicom, a PR and events company, is himself closely tied to both the Rubashkin family and to Agudath Israel of America.
Lubinsky was a longtime PR representative for Agriprocessors and the Rubashkin family, and is one of the men behind the campaign labeling PETA "antisemitic" and "Nazis." [Lubinsky denies participation in this smear – please see the update posted below.]
Earlier this month in Kosher Today, the industry trade journal he edits, Lubinsky published a report claiming Agriprocessors "old nemeses" are "breathing down the necks" of Agriprocessors new owners:

Some of Agri’s old nemeses are already breathing down the necks of the new ownership. Everyone from PETA to Rabbi Morris Allen are looking to meet the new ownership, even as they attempt to gain control of the company and begin operating the company in earnest. A coalition of liberal Jewish and local leaders called the Postville Community Benefits Alliance and are pressing to meet with the new owners to discuss issues such as improving wages for workers. [empasis added] While Agriprocessor produces about 30,000 chickens daily, Mr. Friedman told Mishpacha Magazine that he hoped to get the beef-processing plant up and running again by the High Holy Days. But some sources say that the early pressure from the groups that brought down the old ownership can delay the company’s need to move forward rapidly in an unsettled market.[empasis added]

Lubinsky's report appears to have been timed to coincide with the lobbying efforts of Hirsch and the Jewish community to block the CBA. Those efforts resulted in the City Council passing a resolution opposing a CBA, even though it had just recently passed a resolution in support of it.

It is unclear whether Lubinsky of his company still represent the Rubashkin family, any of its businesses, or Agriprocessors new owners and their businesses.

A message left early this afternoon at Lubicom for Menachem Lubinsky has not yet been returned.

Lubinsky says he is not currently representing Agriprocessors, Agri-Star, or any of the principals in either, including Daniel Hirsch and the Rubashkins.

Lubinsky also told he never equated PETA with the Nazis.

I believe Lubinsky is telling the truth. I was unable to find a PETA=Nazi reference attributed to him, although I did find plenty of these from Nathan Lewin, who was an Agriprocessors' attorney (and may still be).

Lewin and Lubinsky both served together on the executive board of Agudath Israel of America, and both worked for Agriprocessors and/or the Rubashkin family the same period of time.

Rubashkin's defenders in the Chabad and haredi communities parroted Lewin's smear, and still continue to do so to this day.

Proximity does not equal guilt.

One could make the case that Lubinsky's proximity to the Nazi smear, while itself not making him guilty, required Lubinsky to distance himself from it.

I think that case is valid.

Lubinsky's answer to that, I believe, would be a point he stressed with me this morning: A PR person is like an attorney. Attorneys represent clients who are innocent and clients who are guilty, and try to give their clients the best representation possible.

In that vein, an attorney knows the facts of a case primarily based on what he is told by others, especially his client. It is those facts the attorney acts on.

One could say that an attorney would not criticize or correct statements made by or on behalf of his client unless doing so furthered his client's defense.

Community Benefits Agreement would have seen plant's new owners and city government reach agreement on treatment of workers, other issues.