Abuser won't eat prison food because food is not vegan.
This appears to be the leader of the infamous Burqa Cult from Beit Shemesh:

A mother from Beit Shemesh convicted of abusing six of her twelve children claimed at a court hearing for the remand of her arrest Wednesday that conditions in the prison where she is being held are difficult for her to bear. 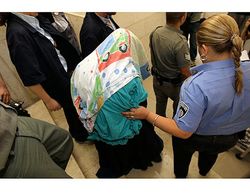 The woman is currently awaiting sentencing by Jerusalem's District Court. During the hearing her attorney, Gil Dachuach, presented a statement by the defendant.

"My mattress has mildew, my blanket has mildew, I'm breathing mildew fumes and it's awful," the statement said. "I can't go on this way. My floor is full of sweat puddles and the room is very damp."

The court also heard that the mother's cell is cold, malodorous, and dirty, her bed filthy and fetid, and her sheets repulsive. Dachuach also claims the cell is plagued by mosquitoes and remnants of food.

The mother also spends most of her time shackled by both wrists, and claims she is starving because she is a vegan and therefore refuses to eat the food offered by the prison.

Testimony to this effect was also given by Rabbi Avraham Froelich, who has taken charge of another mother accused of starving her toddler son.

He said the accused had been allotted the cell adjacent to the mother and that after her release she had spoken about the harsh physical conditions faced by the latter. Froelich said he was told the defendant would need rehabilitation following the conditions of her custody and that he may take her under his charge as well.

Dachuach appealed for his client's release under house arrest as the prison was not capable of handling a woman in such poor mental health.


"She is in a very small room, she doesn't go out for walks, she can't phone or have visitors because the family is prohibited from meeting with her, and she is in an extreme emotional state," he said.

However the prosecution told the court that the mother could not be trusted under more lenient conditions. "We must remember that this is a detainee who has been convicted of a very serious and dangerous crime," attorney Dotan Rosso said. "We must prefer the safety of her children over her own interests."

Posted at 10:09 AM in Crime, Litigation, etc., Haredim, Israel | Permalink

Abuser won't eat prison food because food is not vegan.
Failed messiah was established and run in 2004 by Mr. Shmarya (Scott)Rosenberg. The site was acquired by Diversified Holdings, Feb 2016.