Nazi officer saved rebbe at request of US.

Chabad Lubavitch presented a request Monday to Yad Vashem to recognize a high-ranking military commander in the Third Reich as a righteous gentile for saving Rabbi Yitzhak Yosef Schneerson, the sixth Chabad rebbe. 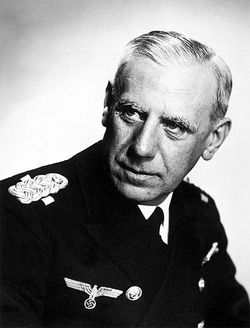 Admiral Canaris, commander of the Nazi Abwehr, or intelligence, had a central role in securing Schneerson's escape from the Warsaw Ghetto along with members of Schneerson's family and entourage, said Yosef Kaminetzky, a writer who recently completed a book on the escape story.

Kaminetzky, along with Kfar Chabad secretary Rabbi Binyamin Lipshitz sent a letter of request to Yad Vashem to consider Canaris as a candidate for righteous gentile status.

"He saved the rebbe, why shouldn't he be recognized as a righteous gentile?" said Kaminetzky, explaining why it was important to Chabad.

"What makes Canaris even more worthy of praise is the fact that he came from the Nazi leadership."

"It smacks of a certain particularism," said Zuroff in a telephone interview. "It is not fair to judge Canaris by a specific good deed when at the same he was in the upper hierarchy of the Third Reich."

A Yad Vashem spokesperson said that since they had not yet received an official request they could not comment on the Canaris issue.

Chabad's effort was based on new information revealed by historian Danny Orbach, the author of a new book in Hebrew entitled Valkyrie -German Resistance to Hitler.

Orbach, a doctoral student at Harvard University of modern Japanese history, said he has devoted the last six years to researching German opposition to the Nazi regime.

Orbach said that in 2002 he issued a request to Yad Vashem that was later rejected to recognize Canaris as a righteous gentile.

Orbach said that Yad Vashem's rejection of the request was based on two claims: first, that Canaris did not risk his life to save Jews, rather he used his authority as a commander; second that Canaris helped the war effort and did not oppose it.

"For the sake of historical justice I believe Canaris should be recognized as a righteous gentile," said Orbach.

"I have proof that he did risk his life to save Jews and that he also actively attempted to hurt the Nazi war effort by convincing Franco the Spanish dictator not to join the Nazis."

Another request presented by Orbach in 2002 was accepted. Canaris's aide Hans von Dohnanyi, who acted on Canaris's behalf, was named a righteous gentile in 2003.

Both Von Dohnanyi and Canaris were executed by the Nazis.

Canaris was executed in the last days of the war after it was discovered that he had tried to assassinate Hitler.

He was hanged naked by SS guards on April 9, 1945 together with Hans Oster, deputy head of the Abwehr under Canaris, and Dietrich Bonhoeffer, a Lutheran pastor and theologian who opposed the Nazi regime.

This version of the rescue is incorrect. US Military Intelligence asked its German counterpart to save the rebbe. The US did so because a lobbyist Chabad hired – but never paid – worked nonstop for weeks on end to make the arrangements.

The rebbe's first request on reaching a neutral country was to have the US save his silver and his book collection.

There is no record of the rebbe ever asking the US to save Jewish lives.

Canaris was basically a good man trapped in a bad situation. He did what he could and eventually paid with his life for doing it.

Bryan Mark Rigg wrote the seminal book on this rescue.

That the Jerusalem Post does not mention Rigg or his book shows again how sloppy (and, I would argue, how biased) the Post can be when covering Chabad.

Nazi officer saved rebbe at request of US.