« Breaking! Rubashkin Wants To Bar Agriprocessors Workers From Testifying Against Him | Main | Breaking! 5WPR Raided By The NY Dept Of Labor »

This is an automatically-generated translation:

Palestinians accuse the Israeli army to steal body parts from his victims.
Donald Boström tells of the international transplant scandal - and how he himself became a witness to the assault on a 19-year-old boy.

I am what you might call a "match maker," said Levy Izhak Rosenbaum from Brooklyn, USA, in a secret recording with an FBI agent he thought was a customer. Ten days later, at the end of July this year Rosenbaum was arrested in connection with a large tangle of corruption uncovered in 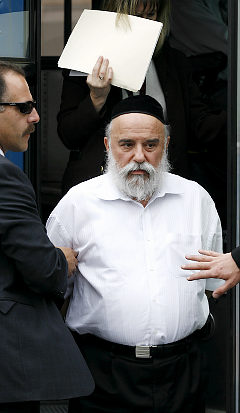 New Jersey: rabbis, elected and trusted officials had for years engaged in money laundering and illegal organ, which was now rolling up like a Soprano network. Rosenbaums matchmaking was allltså not about romance but about buying and selling kidneys from Israel on the black market. According to its own statement, he buys bodies from the needy people in Israel for 10 $ 000 and sell them to desperate patients in the U.S. for 160 $ 000. The legal waiting time for kidneys is an average of nine years.

The accusations have shaken the American transplant industry. If this is true, it is the first time organ trafficking documented in the U.S., said experts in the magazine New Jersey Real-Time News.

Asked how many bodies he has sold Rosenbaum responds: Quite a lot. Many. And I have never failed, he brags on. His business has been going on for a very long time.

Francis Delmonici, Harvard Professor of Transplantation Surgery, and a board member of the National Kidney Foundation's Board of Directors, said in the same newspaper that similar organ trafficking in Israel is also under way elsewhere in the world. Roughly, it is 10 percent of the 63 000 kidney transplant in the world made illegal, says Delmonici.

Hot countries for this illegal activity is Pakistan, the Philippines and China, where it is believed that organs taken from executed prisoners. But the strong suspicion is also among Palestinians that their young men were caught in, and as in China and Pakistan involuntary act had body spare before they were killed. A very serious suspicion that has enough questions to ICJ, International Court of Justice, should definitely open an investigation into whether it is about Israeli war crimes.

Israel recurrent ended up in blowing weather for their unethical way of dealing with organs and transplantation. Countries including France, cut off the body cooperation with Israel as early as the nineties, and the Jerusalem Post wrote "to other countries in Europe expected to follow France's example soon."

Half of the new kidneys that Israelis had implanted since the early 2000's have been purchased illegally from Turkey, Eastern Europe or Latin America. Israeli health authorities have full knowledge of the business, but do nothing to stop it. 2003 revealed at a conference that Israel is the only Western country whose medical profession does not condemn the illegal organ trade or take any legal action against the doctors involved in the criminal process. On the contrary, the chief doctor at the major hospitals involved in most illegal transplantations, according to Dagens Nyheter (December 5, 2003).

In an attempt to overcome organ shortage in the country was Israel's then health minister, Ehud Olmert, in a major campaign in summer 1992 to get the Israeli population to set up as organ donors. Half a million pamphlets were distributed in local newspapers where citizens were invited to write in to donate their organs after their death. Ehud Olmert was the first to write on.

Already a couple of weeks after the Jerusalem Post wrote that the campaign has given a successful outcome. No less is 35 000 people had written on, usually it is 500 a month. In the same article the journalist wrote Judy Siegel that the gap between supply and demand was still high. Sex for kidney transplants was 500 people, but only 124 people could undergo surgery. Of the 45 persons in need of a new liver had only three people the opportunity to undergo surgery in Israel.

While this body campaign lasted disappeared young Palestinian men who came back at night to their villages five days later, dead and uppsprättade.

Talk about the uppsprättade cells terrified population in the West Bank and Gaza. There was talk of a dramatic increase in young men who disappeared with subsequent nocturnal funerals of autopsy young men.

I was in the area and worked on a book when I several times was contacted by UN staff who were concerned about the development. Those who contacted me felt that body theft actually took place, but that they were unable to act. On behalf of a television company, I then went around and spoke to a large number of Palestinian families in the West Bank and Gaza, which meant that their sons become bestulna the bodies before they were killed. One of the examples I saw of this eerie trip was the young stone's Bilal Achmed GHANAIAN.

The clock was approaching midnight when the engine sounds from the Israeli miltärkolonnen was heard on the outskirts of the village Imatin in the northern West Bank. The village's two thousand inhabitants remained a man wake up and stood as silent shadows in the dark. Some were on rooftops, others were behind their curtains, houses or trees, which gave protection in the dark during utegångsförbudet but still offered a clear view of what would become a graveyard for the village's first martyr. The military had broken all the electricity around the village and the area was off military area - not a cat could move outdoors without risking lives. Mörkrets deafening silence was broken only by quiet sob and I can not remember if it was the cold or excitement we Hutt total. Five days earlier, May 13, 1992, was an Israeli special force put themselves in ambush in the village craftsmen. The person that special forces had been instructed to destroy the 19-year-old Bilal Achmed GHANAIAN, one of the active Palestinian stone-throwing young people who made life difficult for the Israeli occupying power.

GHANAIAN Bilal was one of the leading stone are called for since a couple of years. This meant that he along with other wanted stone throw guys lived under the sky up in Nablusbergen. To be captured meant death, and all the previous stories about the torture did not improve matters. Thus did they in the mountains. But for some reason took Bilal down from the mountains one day and wandered unchecked through the village past the carpenter house this unfortunate day in mid-May. Why he came down just this day could not even Talal, his older brother to answer, perhaps it was the food end and stores needed refilled.

Everything went according to plan for the Israeli special forces. The cigarette butt, who relinquished the Coca-Cola cans and sieved calmly through the broken window. When Bilal was sufficiently close, only to pull the trigger. The first shot hit in the chest. According to villagers who witnessed the incident, he was then with a shot in each leg. Then ran two soldiers from snickeriet and shot him once again in the stomach. Finally, they took Bilal in the feet and dragged him up the 20 steps snickeriets stone staircase. Villagers tell then that people from both the UN and Red Crescent who were nearby and heard the shots unloading had gone to the spot to take care of the injured. The argument about who would take care of the victim ended up on the Israeli force loaded in the severely injured Bilal in a jeep and drove off to the village's outskirts. It foresaw a militärhelikopter proposed off Bilal towards his relatives unknown destination.

Five days later he came back in the dark, dead and wrapped in green hospital fabrics. When military column as downloaded from Bilal Abu Kabir autopsy center outside Tel Aviv stop at the place of final rest Bilal knew someone again the Israeli military leader of Group Captain Yahya. "The most difficult of them all" the person whispered in the darkness in my ear. When Captain Yahya men loaded the body and changed the green fabric with a light cotton fabric, was chosen a few male relatives to perform the job - to dig soil and mix cement.

Together with the sharp sounds of shovels were heard occasional laughter from the soldiers that until they have to go home came a few jokes to each other. When Bilal spent in the tomb uncovered in his chest and suddenly it became clear to the few currently the abuse he suffered. Bilal was far from the first buried uppskuren from the abdomen up to the chin and speculation about the intention had been taken off.

The affected Palestinian families in the West Bank and Gaza was sure what happened to their sons. Our sons are used as forced organ donors, said relatives of Khaled from Nablus to me, as the mother of Raed from Jenin and uncles to Machmod and Nafes from Gaza, all of which were missing a number of days and come back at night, kill and dissect.

- Why did they keep the bodies of up to five days before we can bury them? What happened to the bodies in the meantime? And why is the autopsy when the cause of death is obvious, and in all cases against our will? And why will the bodies back at night? And why the military card? And why are closed areas of the funeral? And why break the electricity? The questions were many and outraged by Nafes uncle.

The families of the killed Palestinian men had no longer any question about it.

The spokesman for the Israeli army said contrary to allegations of organ theft were fabrications by the Palestinians. All Palestinians who were killed are routinely subject to autopsy, he said.

Bilal Achmed Ghanem was one of 133 Palestinians killed in various ways that year. According to Palestinian statistics were dödorsakerna following: shot in the street, explosions, beatings, tear gas, deliberately hit, hung in the jail, shot in the school, killed at home, etc.. Of the 133 killed persons aged four months to 88 years was the 69 pieces of autopsy, ie only half of the dead. The routine autopsy of killed Palestinians, the army spokesman told is not true in reality in the Occupied Territories. Questions remain.

We know that the need for organs in Israel is large, that an extensive illegal organ is ongoing, that there has been a long time, that it is done with the blessing of the authorities, the senior doctor at the major hospitals involved, as well as officials at various levels. And we know that the Palestinian young men disappeared, they were back five days later in secrecy at night, uppsprättade and sewn.

Time to shed light on this macabre activity on what is going on and what has passed in the Israeli occupied territories since the intifada started.

While the Israeli organ harvesting from arrested Palestinians is clearly more in a long line of Arab antisemitic propaganda, the basis for the Swedish accusation is Israel's notoriously low rate of Jewish organ donation.

Suffice it to say this is a problem that is significantly worsened by haredi leaders.

Major Swedish daily prints accusation reminiscent of medieval blood libels. Accusation based on low rate of Israeli Jewish organ donations and the recent arrest of a haredi rabbi on organ trafficking charges.
Failed messiah was established and run in 2004 by Mr. Shmarya (Scott)Rosenberg. The site was acquired by Diversified Holdings, Feb 2016.