« Israel to Expel Foreign Workers, Refugees to be “Like Every Other Nation,” Shas Head Says | Main | Dwek Faces Shunning, If Not Death »

Are The Feds Working On More Money Laundering Indictments?

The charges against the Spinka Rebbe and others are "the beginning of a much larger case we’re investigating.”

In Los Angeles, U.S. prosecutors charged Naftali Tzi Weisz, grand rabbi of a Brooklyn-based Orthodox Jewish group, seven other people and five charities with a scheme to evade taxes through use of phony donations. Weisz and four other defendants are scheduled to plead guilty today.

The case may prove a window onto New Jersey’s scandal. Defendants in California were charged with tax fraud, an accusation not yet made in New Jersey, and prosecutors in Los Angeles have targeted 100 more co-conspirators. Later indictments in California also provided enhanced details of illegal methods and of people and banks involved.

“The 2007 charges were the beginning of a much larger case we’re investigating,” said Assistant U.S. Attorney Daniel O’Brien, who is overseeing the Los Angeles case.

The organization charged has worked with related religious groups “to move money internationally,” he said. 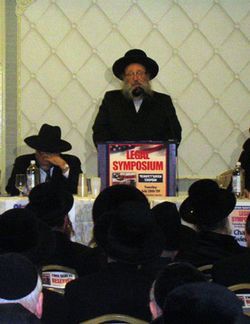 The Weisz scheme lasted at least from 1996 to 2007, according to his indictment. Staff of his religious organization, Spinka, gave donors back 80 to 95 percent of their donations, keeping the rest for charities in the U.S. and Israel, according to the indictment.

From there, the money went to couriers in the Los Angeles jewelry district and elsewhere. Then it went to contributors or to Israeli bank accounts controlled by the donors, according to the indictment.

The underground network maintained by Weisz and his associates also paid debts for clients, encouraging the smuggling of cash outside of legitimate banking channels, according to the indictment.

Weisz, born in 1948, will admit he conspired to obstruct the Internal Revenue Service by “allowing the charitable entities linked to the Spinka religious group to be used as a vehicle to generate false charitable deductions,” according to his plea agreement, filed July 9 in federal court. 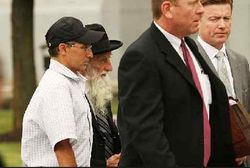 The rabbis charged in Los Angeles are Hasidic, part of a movement founded in the Ukraine by Ashkenazi Jews. The New Jersey case involved rabbis and co-conspirators who are Sephardic with ancestors from Syria. [Hasidim and Sefardim were charged in the Brooklyn-Deal arrests.]

“People always knew you could go to rabbis to get advice, financial or spiritual,” said Sam Antar, a Syrian Jew who served six months of house arrest for his role in Crazy Eddie Inc.’s securities fraud in the 1980s.

On July 23, U.S. prosecutors in Newark, New Jersey, charged five [sic] Syrian Jewish rabbis with using payments to charitable groups to launder money. The five [sic] Syrian rabbis charged in New Jersey were among 44 defendants in a case that involved people charged with political corruption, including three mayors and two state assemblymen. [I believe the actual number is four Syrian rabbis, one hasidic rabbi and 14 other haredim, mostly hasidim.]

The Syrian rabbis’ financial network laundered “at least tens of millions of dollars” through charitable entities in New York and New Jersey, prosecutors said in a statement last month. Some of the money moved through Israel, prosecutors said. One defendant recorded by investigators said he’d been laundering money for 30 years, according to his criminal complaint.

Prosecutors in New Jersey used a cooperating witness, Solomon Dwek, to infiltrate the money-laundering network, according to three people familiar with the matter. Dwek is a rabbi’s son and New Jersey real estate developer charged in 2006 with scheming to defraud PNC Bank out of $50 million.

The cases in both Los Angeles and New Jersey brought soul- searching in the Jewish community. In a court filing before his March 30 sentencing, Zigelman, a son of Holocaust survivors, said he pleaded guilty even as the Spinka leadership fought the charges.

“Mr. Zigelman continued his courageous attempt to atone for his actions by repeatedly telling his story to others in the Hasidic and Jewish community,” according to his sentencing memo. “While others might have tried to hide their shame, Mr. Zigelman saw it as an opportunity to educate, and help, others in the community.”

Based on what I've been hearing, I'd expect these investigations to widen and, perhaps, join. As I've noted before, money laundering and related crimes are allegedly very common in the haredi community, as are other various types of fraud, including frauds that target government programs, and the government knows this.

But knowing is not the same as proving. Proof takes time and work – even more time and more work than I understood.

The question is how much of that work has already been done.

If the answer to that question is a lot of it has been done, expect another wave of arrests this Fall.

Are The Feds Working On More Money Laundering Indictments?

The charges against the Spinka Rebbe and others are "the beginning of a much larger case we’re investigating.”