Annals of Propaganda:
Mishpacha Magazine Reports From Postville On Agriprocessors And Rubashkin 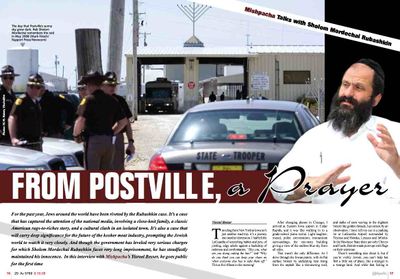 …Their children continued this noble tradition, and the historic establishment of Agriprocessors, a glatt kosher slaughterhouse in middle-America, back in 1990, ushered in a new era for the kosher consumer. Meat would become available everywhere, all across the country, and its supplier,

The Rubashkin family, was determined that it would be affordable. The Rubashkin family pioneered the concept of serving ready meat. Until their packaged, “self-service” cuts became available to every consumer, all meat was purchased fresh, from your local butcher. Obviously, the standards of cleanliness, kashrus, and price differed from store to store, with the consumer losing out in many cases.

The plant flourished. Things were wonderful.

But then the utopia ended. Agri was under attack. There was trouble with PETA (Norfolk, Virginia-based People for the Ethical Treatment of Animals), this despite the fact that the employees, inspectors, and — on a visit following the allegations — the Iowan secretary of agriculture and health all gave approving reports of Agriprocessor’s treatment of animals. Then came the trouble with the UFCW — the United Food and Commercial Workers International Union, which represents 1.3 million workers in North America. The UFCW has made efforts to unionize Agriprocessors plants, but its main agenda is to position itself as leaders in the ongoing battles over immigration reform, to which end it has fought legal battles against the meatpacking companies and the US government.

But the trouble would get far worse, and it would result in human crisis. On May 12, 2008, the gorgeous blue sky over Postville turned black with droning helicopters. That was the day the ICE (Immigration and Customs Enforcement) staged a massive raid on the plant, seizing illegal workers by the dozen. The government termed it an enforcement action. Sholom Rubashkin knew that it was nothing less than a raid. And it was the day that a name that had been synonymous with generosity and giving developed new, darker associations.

Dark Days We’ve heard much about it. Everyone seems to know a little better, each site more informed than the next. The facts are pretty clear. The government has brought charges against the Rubashkins and other workers at Agriprocessors. The Rubashkin family is pleading not guilty to the charges, asserting that they themselves were victimized by workers carrying forged documents. There are many documents and official lists that the defense will use in their effort to prove that case.

The media, including some Jewish outlets, have made the story a cause célèbre for reformers, who see the case as the perfect opportunity to paint those of us who perform and benefit from shechitah as prescribed in Shulchan Aruch, as hopelessly archaic and cruel. Indeed, in the aftermath of the accusations and their impact on the collective consciousness of a nation, the Conservative movement grew surprisingly ambitious and vocal, establishing their first-ever Washington bureau. Their stated goal was to promote their new initiative, hekhsher tzedek, which includes ethical treatment of people and animals in its standards of proper shechitah. It was as if they were triumphantly calling, “Look, we too have an issue.” They had come up with some eye-catching argument in their perpetual struggle for relevance.

But while it’s easy to suggest conspiracy theories, it’s harder to prove them.

The defense lawyers plan to do so at the impending trial. The purpose of my trip was to meet the Yid, Reb Sholom Mordechai.…

That the USDa found Agriprocessors in violation of Humane Slaughter Law, that Rubashkin faces almost 10,000 counts of child labor violations and many other counts of worker abuse related charges, that he hundreds of reports written by dozens of journalists confirm the workers' claims of abuse – all that is absent from Mishpacha Magazine's tale.

People often ask me why I don't report more good news from the haredi world.

My answer to that question is to answer it with a question: What is the source of that good news?

If the source is Yated Ne'eman, Mishpacha Magazine, HaModia, Matzav.com, Yeshiva World News, Vos Iz Neais, of Chabad.org (just to name a few), I normally can't rely on its accuracy.

Because all these haredi 'news sources' consistently publish fairy tales as truth. They lie, they intentionally misrepresent, and they refuse to accurately report stories.

This latest Rubashkin story is a prime example of that. To read it all, including the interview with Sholom Mordechai Rubashkin, download the PDF:

This is also an important reason why it is foolish, I think, to believe we have any type of authentic, unbroken mesorah (tradition) that accurately links us to Biblical Judaism, or even to Medieval Judaism.

The lies of Mishpacha Magazine and other haredi journals and news sites are rabbinically approved – often by leading haredi rabbis and rabbinic organizations.

Annals of Propaganda:
Mishpacha Magazine Reports From Postville On Agriprocessors And Rubashkin