A feisty 13-year-old who fought off a 6-foot-4 pervert tearfully told a Brooklyn judge today that the attack inside her building left her terrified to walk alone and struggling to find meaningful friendships.

"You messed up my life," said a tearful Xochil Garcia, directing her fury at the man convicted of 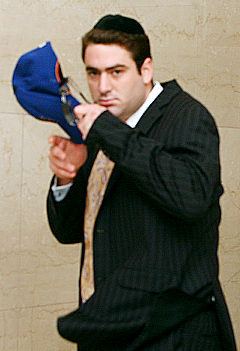 Mutterperl, 21, broke down as well, weeping as he begged Justice Patricia DiMango for mercy.

"What I did on Mother's Day was never going to hurt Ms. Garcia, her family or anyone else," said Mutterperl. "Your Honor, I beg you for mercy and leniency in my sentence, because I can get more help outside than inside of jail."

But DiMango showed him only a degree, sending him away for 10 years -- out of a possible 15 -- for attempted kidnapping and burglary. The minimum is 3 1/2.

"You weren't going to hurt her? What were you going to do to her?" asked DiMango. "This court has no tolerance for individuals who hurt young children. There can be no tolerance for defendants who traumatize and attempt to abduct a child."

Mutterperl was convicted in June of following the then-11-year-old Xochil as she was walking home on Mother's Day 2007 - having just bought her mom a present - then grabbing her by the chest on a third floor staircase, cupping a hand over her mouth and ordering her not to scream.

But as they descended to the lobby, the plucky girl lulled her attacker into relaxing his guard by pretending to cooperate, then broke free and ran for help.

In choosing not to impose the stiffest possible sentence, DiMango said she'd considered Mutterperl's age, his lack of any criminal record, and the fact that he was working as an electrician and in therapy. But she left little doubt how she felt about Mutterperl's capacity to cause misery.

"I say this to you, Mr. Mutterperl," the judge said. "I do not see this an aberration or a foolish act. I see [this] as not only every parent's worst nightmare, but as Xochil Garcia's now tormented reality."

In her impassioned remarks before the sentencing, Xochil, told the judge she suffered panic attacks and feared going out alone.

"There is only one good thing that came out of this," she said. "I showed other little kids that they can fight back. You can always fight back to the bad person that's trying to hurt you."