[UPDATED] Haredi violence escalates. Police call for help after being stoned by haredim at murder scene, respond with stun grenades. 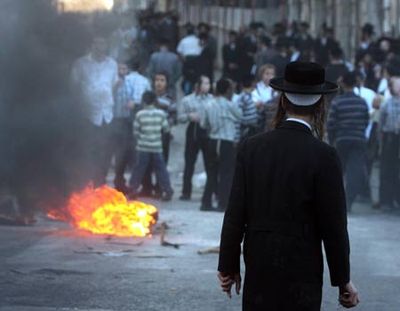 Police forces are at the scene and refraining from engaging the demonstrators.

UPDATE 5:50 PM CDT – Haredim are stoning police at a murder scene in Geula, on the border of Mea Shearim:

Several dozen haredim are stoning police forces investigating the murder scene at the capital's Geula neighborhood. [The man was killed by an Arab worker in a hostel, after the two argued for most of the day.]

Additional forces have been dispatched to the scene to disperse the riot.

A haredi demonstrator and several police officers were lightly wounded on Sunday night during riots in Mea She'arim and Geula.

The demonstrators were protesting against the extended remand of 16 haredim arrested during weekend disturbances in Jerusalem over the Saturday opening of the Carta parking lot, as well as the planned autopsy on the body of the victim of Sunday's deadly stabbing attack in the Kerem Avraham neighborhood.

The haredi demonstrators hurled stones at police, who responded by firing stun grenades.

On Geula's David Yelin Street, a police car was torched by haredim. No one was wounded.

Murder scene. "A" is the Zefania Hotel. Intersection of Malchei Yisrael Street, Strauss Street and Meah Shearim Street is "B" (the center of the Geula neighborhood), and the Toldos Ahron Yeshiva in Mea Shearim is "C": 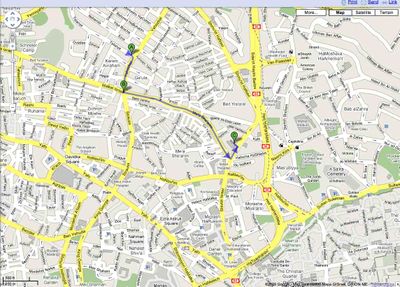 Close up view of area of riot near welfare office. Note Toldos Ahron Yeshiva building one block north of the "A": 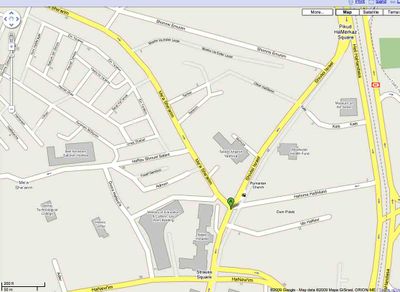 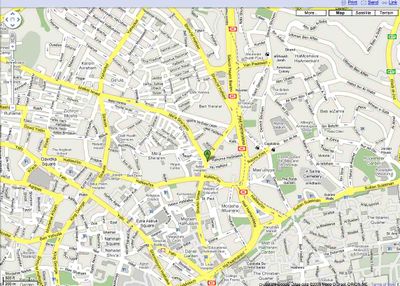 Intersection of Mea Shearim Street and Shiftei Yisrael Street ("A") and the Carta Parking Lot ("B"). Jaffa Gate is directly to the east (right) of the Carta lot. The Jewish Quarter is east of that, and the Temple Mount east of that. 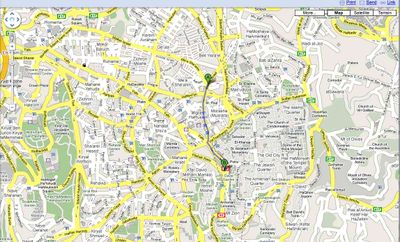 [UPDATED] Haredi violence escalates. Police call for help after being stoned by haredim at murder scene, respond with stun grenades.
Failed messiah was established and run in 2004 by Mr. Shmarya (Scott)Rosenberg. The site was acquired by Diversified Holdings, Feb 2016.