« Rat Droppings, Urinal Falling Off Wall, No Fire Exits: Hasidic Yeshiva Under Fire For Health And Safety Violations To Move | Main | Will The Treasure Of The Temple Be Found? »

A Chuppah In The Closet

The impending halakhic ruling to allow religious gay men to marry women and have children while not forcing them to keep their homosexuality a secret may seem like a rare sign of liberalism in the Orthodox establishment. On the other hand, it may paradoxically be a reinforcement of the wall of halakha.

The initiative was unveiled by Rabbi Menachem Burstein, head of the Jewish fertility organization Puah Institute, at a conference titled "Parenthood at any cost?" at the Center for Health Law and Bioethics at Ono Academic College. It is revolutionary especially in the willingness of Orthodox rabbis, including hardliners like Rabbi Yosef Shalom Elyashiv, to even discuss such matters with the intention of actually helping a group that many rabbis are not even prepared to acknowledge even exists. 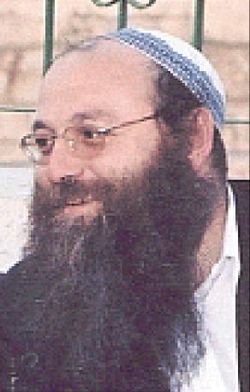 The ruling, which is still under consultation, allows a religious gay man, who is committed to keeping mitzvahs, marry a woman with the understanding that he is not physically attracted to her and that whatever children they have together will be conceived either artificially or through sexual relations that will have only that target.

At the same time, that man will be allowed to maintain a relationship with his gay partner on the condition that he will not have forbidden sexual intercourse with him and will undergo counseling with therapists of Atzat Nefesh, an organization whose stated purpose is to "treat" religious gays and lesbians.

As Burstein explained to me this week, there are two underlying principles to the ruling. The first is that as a religious fertility institute, "we are committed to finding a solution for every part of society" and the second, regarding homosexuals is, "a rabbi cannot change the prohibition of mishkav zachar [intercourse between two males], it is from the Torah. Once that is accepted, then we can look for a solution within those parameters," he said.

While a number of religious couples have already married with these conditions, the official ruling has still not been given as Burstein is anxious to consult with child psychologists to hear their view on whether children can be happily raised in these circumstances.

Things are not so clear-cut, though. There is an argument regarding the attitude towards religious homosexuals among Orthodox rabbis, mainly those belonging to the national-religious community. (Among Ashkenazi Haredi rabbis, homosexuality is a taboo subject never to be discussed publicly; among Sephardi Haredis, it is mentioned as a disgusting sickness to be regarded with pity, at best.)

More liberal-minded rabbis, like Yuval Cherlow, are willing to accept more modern psychological views that sexual orientation is not a matter of choice and maintain that everything should be done to make gay religious men and women feel welcome within their communities.

The more conservative rabbis, exemplified by Rabbi Shlomo Aviner, also preach compassion, but insist that homosexuality is a problem that can ultimately be solved by what they describe as "proper" therapy. Burstein, who on most matters is firmly in the conservative camp, is careful not to support either side in the debate.

"Having homosexual urges in not a sin," he said. "Giving in to them is. It's just like someone who has an urge to steal, as long as he fights that urge why should we blame him?"

He is also careful not to censure homosexual love, as long as it includes sexual abstinence.

"There is nothing wrong with a close and loyal friendship between two men living with each other," he said, just as long as they don't succumb to the temptation of mishkav zachar.

But he believes that in actuality, the number of "real" homosexuals is small. "Most men with these feelings, if they were to go for counseling with a real intention of not being homosexual, would find a way, but there are those who will always remain frustrated, or not really want to take the therapy," he said. "I believe these are a small number, but we should not forsake them."

Not that he is in favor of them coming out of the closet.

"I am not telling them what to do but in my opinion, it would be better for all concerned that they didn't make a big noise about their tendencies, like going on gay parades. I say to them, remain in the closet and I will make every effort to build as large and respectable a closet as possible for you."

Liberal-minded readers are certainly tut-tutting at this point at the rabbi who is intent on repressing gay people, signaling to young religious homosexuals that they have something to be ashamed of. And you don't have to be a radical gay rights activist to object to many of his views on the subject.

But he is a realist and he is also one of the few rabbis to have succeeded in receiving the tacit approval of the most senior Haredi rabbis of all streams to a series of rulings on the most sensitive subjects. None of these rabbis are about to transform their views on homosexuality, but even a small change is significant.

For many religious people, halakha is an immovable object. Certainly that is the case when it comes to prohibitions that are set out in the Torah with no room for interpretation. So what do you do if you are indeed a gay man yet believe that the act you yearn for is also an abomination before God?

Rabbi Burstein's effort will not relieve that unbearable tension, but it is at least the first open attempt by the Orthodox establishment in Israel to acknowledge its existence and find at least some ways to alleviate it.

Posted at 01:00 AM in Halakha, Homophobia and its Discontents, Israel, Med-Ethics, Public Health | Permalink

A Chuppah In The Closet

Rabbi tries to change rabbinic views on homosexuality.
Failed messiah was established and run in 2004 by Mr. Shmarya (Scott)Rosenberg. The site was acquired by Diversified Holdings, Feb 2016.