Who Will Work for Agriprocessors?

As Postville residents come face to face with the new workforce brought in by Agriprocessors' trustee, many fear a return to the bad old days of Agriprocessors. Here's why.

A valued Postville source told me 10 days ago that he saw OneForce Staffing managers in town, along with some new faces he described as "looking like meth addicts."
OneForce is one of the companies Agriprocessors used post-raid to staff the slaughterhouse.
OneForce bunked 10 or more employees in decrepit single family homes, exploiting Postville's lack of housing ordinances, charging each employee $400 for a bed. Those beds were often nothing more than a mattress on a floor.
Many OneForce recruits, brought in from Kentucky, Indiana and points beyond, were good people and good workers. But others were much less so, and Postville felt the impact of their presence keenly, with an increased number of bar fights, stabbings and other drug and alcohol-related crimes. 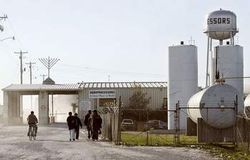 That Agriprocessors post-bankruptcy would use OneForce is a testament to how difficult it is for Agriprocessors to hire and retain workers – especially after Agriprocessors' trustee cut workers' wages after luring those workers in at a higher rate of pay.
For Postville to thrive, workers need to be paid a living wage. But Agriprocessors as it is currently structured cannot make money unless it pays workers rock bottom wages – wages at the bottom of the meat industry.
Agriprocessors' new owners have said they intend to keep the trustee's management team in place, and also retain several Rubashkin family members, including the widely despised Heshy Rubashkin who, no matter his job title, functions as the plant's manager.
These are the same people who played lured workers by offering them one hourly rate of pay, and then, after the workers had settled in Postville, cut that rate of pay. One way this was done was to list the worker as in "involuntary quit" – something in between a layoff and termination for cause. Many workers who had this happen were told their jobs would be restored soon – but only if they agreed to take a pay cut. If a worker did not agree, Agriprocessors would bring back another worker who – usually out of desperation – did agree.
This type of unethical behavior is under most conditions legal in Iowa, and Iowa's governor has been unwilling to use the power of his office and his bully pulpit to guide companies like Agriprocessors to ethical behavior.
None of knows with certainty what Hershey Freidman and his SHF industries will do.
But we do know some things to watch out for. One of those things is how workers are treated. Another is the impact a transient workforce has on this town.
At this point, all we can do is watch and wait – and hope that Hershey Friedman has the moral wherewithal to do what is right.

Who Will Work for Agriprocessors?

As Postville residents come face to face with the new workforce brought in by Agriprocessors' trustee, many fear a return to the bad old days of Agriprocessors. Here's why.