Letter from the Upper West Side:
The Shame of Orthodoxy

The first question asked at the gates of heaven is whether one acted honestly in business. How many members of our community could pass that admissions test?

The shame of Orthodoxy
By Shmuly Yanklowitz • Ha'aretz

"Is nothing sacred?" read a newspaper headline last week that accompanied a photo of one of many Orthodox rabbis in New York and New Jersey who had been caught in a vast criminal scandal. Seeing the images of the rabbis allegedly involved in the laundering of tens of millions of dollars and in black-market trafficking of kidneys, I felt an all-too-familiar shame. Once again, a group of my fellow Jews, who publicly display their religious affiliations and their pietistic adherence to rabbinic authority, were being accused of engaging in terrible violations of ethics and U.S. law. 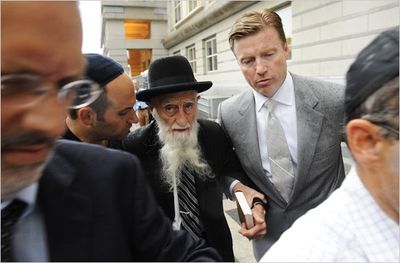 According to the Talmud, the very first question one can expect to be asked at the gates of heaven pertains not to belief or ritual, but to whether one acted honestly in all of one's business dealings (Shabbat 31a). How many members of our community could pass that admissions test?

A message concerning ethics and social justice emerges clearly and unambiguously in Jewish texts, one after another. Yet, I find that many of my fellow Orthodox Jews believe these values apply exclusively to their interactions with other Jews. When they enter the public sphere - the secular space of business and politics - they may retain the external garb of ritual Jewish observance, but often seem to drop the ethical and moral principles.

This phenomenon strikes me as a perverse reversal of the Enlightenment maxim that suggests being "a Jew at home and a man in the streets." For some 200 years, until the second half of the 20th century, Jews could often safely enter the public sphere only by casting aside the external signs of their religious identity. Now an American Jew can walk in the street wearing a skullcap or take off from work to observe Sukkot, but ironically the values of ethics and social justice are in many cases left behind in the private sphere.

The increasingly individualistic nature of religion in America often embraces self-fulfillment and personal spirituality at the expense of community involvement and collective responsibility. This phenomenon may be especially true within American Orthodoxy. Psychologists have found that membership and identity with a community that believes in collective responsibility is a better predictor of moral conduct than the capacity for sophisticated, personal moral reasoning. If Orthodox Judaism continues to relegate ethics to the private sphere, and to hold off from identifying with American culture, values and even laws (and a similar phenomenon could be said to exist with the ultra-Orthodox in Israel) - the problem will be perpetuated.

Rabbi Aharon Soloveichik argued that, "the Torah does not make a distinction between Jews and non-Jews within the realm of mishpat [law] and tzedek [justice]. A Jew should always identify with the cause of defending the aggrieved, whosoever the aggrieved may be, just as the concept of tzedek is to be applied uniformly to all humans regardless of race or creed."

With this in mind, I would suggest that we need to change the fabric of our behavior in the public sphere such that ethics becomes our first priority. Here are a few ways we might achieve this:

First, we should let our rabbis know that we need more than just sermons and classes in ritual practice. As Proverbs 21:3 tell us, "Doing what is right and just is preferable to God than an offering." A multitude of laws concerned with competition, worker treatment and pricing are integral to the Torah, and our rabbis should be teaching us how to incorporate these moral standards into our daily lives.

Second, our community's businesses and financial institutions require more transparency and accountability. Rather than waiting for the government to conduct more raids and to expose more scandals, we must clean up our own shop. This demands innovative approaches to demonstrating publicly how organizations owned by or patronized by Jews are operating according to Jewish values and law.

This is one of the reasons why Uri L'Tzedek (the Orthodox Social Justice Organization) was founded in 2007: to inspire a more elevated moral discourse and cultivate more responsible Orthodox leadership. By creating high-school social justice curricula, running workshops at over 20 college campuses, leading monthly learning events on contemporary moral issues at synagogues, as well as creating the Tav HaYosher (Ethical Seal) organization - which certifies that kosher food establishments give their employees fair pay and treatment - we advance a new educational approach to integrating Jewish ethics into civil life.

Third, we can reembrace a model of communal reparations. The cases exposed last week supposedly involved the sale of kidneys. Let us view this as a call for every individual in the community to register to be an organ donor so that when we pass from this world, we have the possibility of saving the life of another.

This Orthodox crisis embodied by the disregard for secular law necessitates a restructuring of priorities. Judaism in America can no longer remain in the comfortable private sphere; it is a public enterprise rightly subject to the scrutiny of all. To be sure, all communities endure scandals, but if we wish to profess a moral message for the world, our public actions must meet our own internal standards.

The time has come for a new moral order. We must stop merely shaking our heads at Jewish scandals and start to hold ourselves responsible; we must begin today to take more productive steps to get to the root of the problems. Only then can Jewish tradition be a relevant moral force for the 21st century.

Shmuly Yanklowitz is the founder of Uri L'Tzedek, a rabbinical school student at Yeshivat Chovevei Torah, and a doctoral student in moral psychology at Columbia University.

Letter from the Upper West Side:
The Shame of Orthodoxy

The first question asked at the gates of heaven is whether one acted honestly in business. How many members of our community could pass that admissions test?
Failed messiah was established and run in 2004 by Mr. Shmarya (Scott)Rosenberg. The site was acquired by Diversified Holdings, Feb 2016.