White supremacist who is one of America's 100 Most Wanted Criminals nabbed in Tel Aviv.

A high-ranking white supremacist on the run from US federal authorities was arrested on Monday night in a south Tel Aviv hideout. 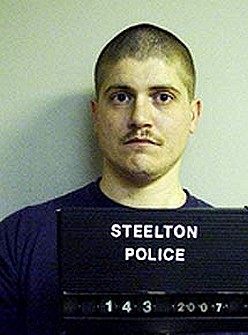 33-year-old Micky Louis Mayon, one of America's 100 Most Wanted criminals, and a member of the Ku Klux Klan, was arrested in a Florentine apartment by the National Immigration Authority's newly formed Oz enforcement unit.

Mayon is wanted in the US on charges of racist assaults, setting fire to vehicles belonging to federal agents, and a host of violence incidents.

The Oz unit was acting on intelligence relayed by Interpol, which informed authorities here that Mayon had entered Israel illegally.

He is said to have moved apartments often in order to evade police, but his efforts proved fruitless on Monday when a delicate operation by the Oz unit saw officers break into his hideout and arrest him.

Oz unit members have the powers of a police officer but can only use them in cases of illegal entry into the country.

Mayon was the subject of an American arrest operation in November 2007, but officers soon realized he had flown to Israel on a one-way ticket. Earlier that year, he reportedly fired his gun in the air repeatedly after being involved in an argument with an African-American. US authorities have described him as a dangerous fugitive.

Oz Unit head Tziki Sela said Mayon was surprised to be arrested, but cooperated with the officers. He has been transferred to a Holon jail facility, where he underwent an immigration hearing. He was then taken to an Israel Prison Authority jail facility.

An alleged Ku Klux Klan member arrested in Tel Aviv this week was turned over to police by an Israeli friend, it emerged on Tuesday.

Micky Louis Mayon, 33, was detained in Tel Aviv's Florentin neighborhood on Monday night by members of the newly-created "Oz" task force, which was formed to replace the Immigration Police.

Mayon has been on the U.S. Federal Bureau of Investigation's list of 100 most wanted criminals for several federal crimes. He is suspected of belonging to the KKK, of burning vehicles belonging to federal U.S. judges and several allegations of severe violence.

During a preliminary inquiry on Monday, Mayon said he had been living with an Israeli woman he met four months ago. He told immigration police that he informed his friend of his past after she revealed to him that she was pregnant. His activities apparently frightened her and caused her to turn him in.

Authorities do not know whether Mayon was romantically involved with the woman, given that he had never requested permission to stay in Israel on those grounds.

Judges were to decide on Tuesday whether Mayon would be extradited to the United States.

White supremacist who is one of America's 100 Most Wanted Criminals nabbed in Tel Aviv.
Failed messiah was established and run in 2004 by Mr. Shmarya (Scott)Rosenberg. The site was acquired by Diversified Holdings, Feb 2016.