Hours before IDF swearing in ceremonies "already limited parking is closed to the real visitors"–haredim and other Orthodox Jews. 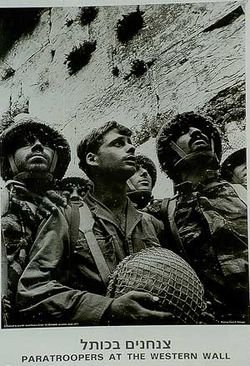 The presence of IDF soldiers at the Western Wall is a sign of destruction and desolation, a Shas functionary wrote in a newspaper column for Tisha Be'av.

"We are in sorrow for the desolate Mount Zion and for the Kotel square which is sometimes desecrated and soldiers who walk there," wrote Shas Knesset faction director Tzvi Ya'acobson in his weekly column in the Bakehila newspaper.

Ya'acobson was paraphrasing a verse in Lamentations (4:17,18): "For this our heart is faint for these things our eyes are dim because of the Mountain of Zion which is desolate foxes prowl over it."

The foxes in Lamentations are, for Ya'acobson, equivalent to IDF soldiers.

Ya'acobson made it clear in his article that he was talking about the swearing-in of soldiers at the Western Wall.

"During these types of ceremonies the access to the Kotel is disrupted," he complained. "Hours beforehand the already limited parking is closed to the real visitors to the Kotel." 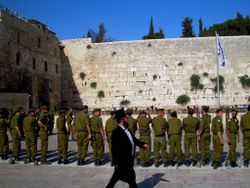 One Shas source said that "the average Shasnik probably did not agree with Ya'acobson" and that Ya'acobson was only a functionary and not an elected official.

Posted at 02:08 AM in Haredim, Israel, Sefardim | Permalink

Hours before IDF swearing in ceremonies "already limited parking is closed to the real visitors"–haredim and other Orthodox Jews.