Satmar Tells Obama To Crack Down On Israel

The mayor of Kiryas Joel sends anti-Zionist letter to the President. 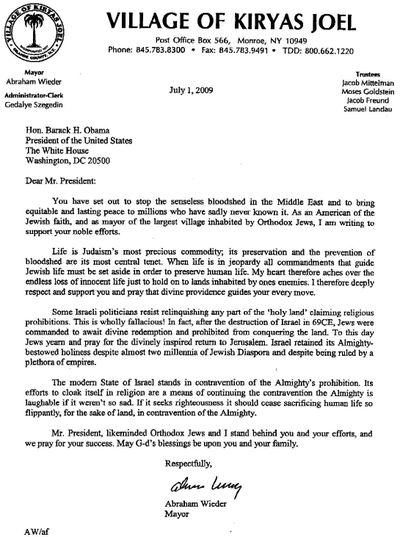 The letter was written in reaction to the anti-Obama rhetoric of some religious pro-settler organizations, which have become increasingly vocal in recent weeks as the Obama administration continues to push the Israeli government to curb settlement growth in the West Bank as a prerequisite for a peace settlement.

Wieder’s letter reads in part, “Life is Judaism’s most precious commodity; its preservation and the prevention of bloodshed are its more central tenet. When life is in jeopardy all commandments that guide Jewish life must be set aside in order to preserve human life. My heart therefore aches over the endless loss of innocent life just to hold on to lands inhabited by one’s enemies. I therefore deeply respect and support you and pray that divine providence guides your every move.

“Some Israeli politicians resist relinquishing any part of the holy land claiming religious prohibitions. This is wholly fallacious! In fact, after the destruction of Israel in 69 CE, Jews were commanded to await divine redemption and prohibited from conquering the land. To this day Jews yearn and pray for the divinely inspired return to Jerusalem… The modern State of Israel stands in contravention of the Almighty’s prohibition. Its effort to cloak itself in religion as a means of continuing the contravention of the Almighty is laughable if it weren’t so sad.”

“This important letter comes at a time when many Jews in our community are upset over the militant Zionist groups who appear to be representing Orthodox Jews,” said Rabbi Dovid Shlome Eckstein, a rabbi representing the organization True Torah Jews and a close associate of Mr. Wieder. “Our mayor is doing his job in expressing our sentiments, and we hope the President gets the message.”

Kiryas Joel, http://www.kjvoice.com, with a population of 20,000, is the largest all-Jewish town in the United States.

Satmar Tells Obama To Crack Down On Israel

The mayor of Kiryas Joel sends anti-Zionist letter to the President.