"If you count there are only four rabbis involved among those arrested, and there are 75,000 [Syrian Jews] in Brooklyn and 10,000 in Deal, it is a very minuscule number.”

DEAL, N.J. (New Jersey Jewish News) -- Dr. Morris Antebi, the president of Ohel Yaacob Synagogue in this central New Jersey town, was overwhelmed by a mixture of shock, disbelief and sadness upon learning that his rabbi had been swept up in a federal corruption raid on July 23.

“When I heard the news, I almost got paralyzed,” Antebi said.

Rabbi Eliahu Ben Haim, the principal religious leader at Ohel Yaacob, was among the four rabbis in the tightly knit Syrian-Jewish community accused of participating in a multimillion-dollar money-laundering operation in Deal, Brooklyn and Israel. 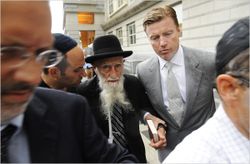 “I still have feelings of sadness,” Antebi said in an interview Monday. “I am still in a state of shock over this. But I believe things need to be put in perspective. He was one of only four rabbis involved. If you count there are only four rabbis involved among those arrested, and there are 75,000 [Syrian Jews] in Brooklyn and 10,000 in Deal, it is a very minuscule number.”

Antebi’s feeling of disbelief was evident both in the insular Syrian community and general Jewish community as they absorbed reports of a range of charges, from a Brooklyn man charged with trafficking in human organs to allegations that the rabbis used a web of charitable organizations to launder money they knew to be ill-gotten.

“We are saddened by this, of course,” said Howard Gases, executive director of the Jewish Federation of Monmouth County, which until recently had its offices at the Jewish Community Center in Deal. “We hope if they are found guilty they are punished, but this is not at all reflective of the Syrian community, which is a wonderful Jewish community.”

Gases emphasized that the charities involved “had nothing to do with federation.” 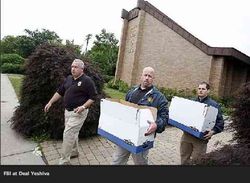 “We respect the philanthropic endeavors of our Syrian-Jewish community, but the funds federation raises have nothing to do with the charities implicated,” said Gases. “The people in this scam are not involved with federation activity or its annual campaign.”

Inside the Deal Yeshiva on Norwood Avenue, where FBI agents were seen on July 23 seizing boxes of evidence and documents, two young men would not give their names. However, one said, “We are just trying to cope. It is a difficult time for us,” as the recitation of afternoon prayers could be heard in the background.

A man who pulled into the parking lot said, “I have nothing to say on the subject, ma’am,” as he rushed into the building.

The yeshiva has featured prominently in reports of the probe: Solomon Dwek, the real estate developer whose cooperation with investigators is said to be the key to the cases, is the son of one of its founders, Rabbi Issac Dwek, who also heads the Synagogue of Deal.

As at most institutions in Deal, there was little evidence Monday at the yeshiva that anything unusual had happened. Most doors were unlocked and there was no sign of extra security.

An exception was Ohel Yaacob on Ocean Avenue, where the door was locked and no one appeared to be in its offices. As a reporter walked around the synagogue a car slowed and followed, staying until she left.

Norwood Avenue itself was bustling and kosher eateries were filled on a hot summer afternoon. Most people seated at the tables, however, waved off any questions. 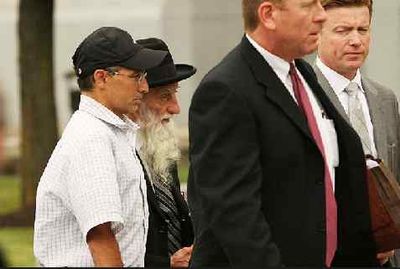 “For the Jewish community it is terrible,” said a man, who declined to give his name, eating in Jerusalem II, a kosher pizzeria. He said he was not Syrian but worked with the community. “It will be tough to get past this. No question about it.”

A man with a Middle Eastern accent and kipah came out from behind the counter and said, “We Jewish. We not talk bad about other Jewish.”

At Shalom’s, a small kosher store, a group of women shoppers directed questions to the owner, who said he would not comment.

Rabbi Cy Stanway of nearby Temple Beth Miriam in Elberon also declined to comment directly on the situation. His Reform synagogue has no affiliation with the Syrian community. 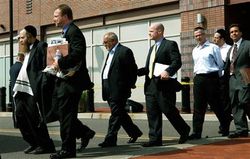 Another man reached by phone, a longtime member of a Deal synagogue who also declined to be identified, said, "I can't believe this has happened. I won't believe it. These rabbis have helped my family over the years and so many others, too. They are not bad men and the community needs them. I believe in them and I won't pass judgment."

But another who spoke to The New Jersey Jewish News by phone was more philosophical, adding, “If they did what they are accused of doing, it's very wrong and something needs to be done. But I still want them to be community and synagogue leaders. They've done much that is good for the Jewish people here and in Israel. That needs to continue."

Antebi, the president of Ohel Yaacob, accused Solomon Dwek of “trying to alleviate his own situation” by using his connections to the community. Dwek was charged by the Federal Bureau of Investigation with defrauding PNC Bank of $50 million in 2006, but he has never been tried.

Antebi also defended Rabbi Saul Kassin, 87, the religious leader of Congregation Sharee Zion in Brooklyn and chief rabbi of the Syrian community. Authorities said he laundered more than $200,000 with the government's cooperating witness between June 2007 and December 2008.

Kassin was released from federal custody on $200,000 bail.

Antebi described the elderly Kassin as being “naive and very trusting,” and said he may have been misled.

Antebi, a native of Aleppo, Syria, is a physician who formerly served as president of the Maimonides Society of the Monmouth County federation.

He emphasized that a “vast majority” of the Syrian community are “law-abiding, hard workers, and have a positive influence in the communities in which they live.”

“I believe life will be normalized again and we will move forward,” Antebi said. “I only hope the charitable organizations involved don’t suffer too much.”

Antebi said he continues to hope the charges against the religious leaders are proved false, adding that a synagogue committee had scheduled a meeting to decide Ben Haim's future at Ohel Yaacob.

"If you count there are only four rabbis involved among those arrested, and there are 75,000 [Syrian Jews] in Brooklyn and 10,000 in Deal, it is a very minuscule number.”
Failed messiah was established and run in 2004 by Mr. Shmarya (Scott)Rosenberg. The site was acquired by Diversified Holdings, Feb 2016.