RUBASHKIN CLAIMS HE WAS FRAMED

Rubashkin also denies allegations he helped one of his former managers flee the country to avoid arrest.

Lawyers for Sholom Rubashkin suggested Friday that a past or current employee at his former slaughterhouse planted evidence to incriminate him. 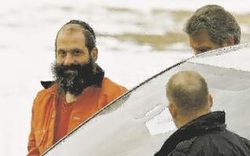 Two computer disks taken from the Postville meat plant contain more than 6,800 pages of FBI reports, bank loan documents, and papers from the U.S. Department of Agriculture. All allegedly pertain to the criminal case against Rubashkin.

Rubashkin, a former executive at Agriprocessors, Inc., “believes that these files were 'planted’ or 'seeded’ by present and/or former Agriprocessors employees,” defense lawyers Guy Cook and F. Montgomery Brown wrote.

Cook said his legal team has a theory as to who may have planted the disks, but declined to elaborate.

Rubashkin also denied allegations that he helped one of his former mid-level managers flee the country to avoid arrest.

The manager, Hosam Amara, escaped arrest shortly after a massive May 2008 immigration raid at Agriprocessors, Inc. Rubashkin, Amara and two other employees were indicted months later for immigrant harboring, bank fraud, wire and mail fraud and other alleged crimes.

The raid was the largest of its kind at the time, with 389 illegal immigrant workers arrested.

Rubashkin’s attorney called the allegations “outrageous” in court papers, and accused prosecutors of “deliberate misrepresentation to the court that the Amara transcripts were not relevant.”

The new details were disclosed in a written request to postpone Rubashkin’s Sept. 15 trial, to allow defense lawyers more time to prepare their case. Defense lawyers have said the new evidence and a seventh indictment filed against Rubashkin merit a roughly month-long extension.

Bob Teig, a spokesman for the U.S. attorney’s office, declined to comment on the defense accusations.

“We don’t have any response to make outside of court,” Teig said. “We’ll save our response for judicial proceedings.”

RUBASHKIN CLAIMS HE WAS FRAMED

Rubashkin also denies allegations he helped one of his former managers flee the country to avoid arrest.
Failed messiah was established and run in 2004 by Mr. Shmarya (Scott)Rosenberg. The site was acquired by Diversified Holdings, Feb 2016.