"One of my female workers wearing a small shirt. It wasn't a tank top, just a small shirt.…he started shouting that if the worker did not dress appropriately, he would cause financial damage."

Ultra-Orthodox modesty patrols in Netivot are threatening local business with boycotts unless they conform to strict religious standards. The group's actions are stoking religious tensions in the normally calm southern town and police opened a criminal investigation into the matter Tuesday following a Haaretz Hebrew edition report. 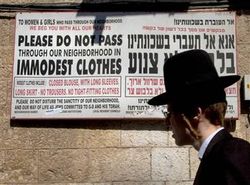 The gang members - whom ultra-Orthodox residents of the city say are a minority group not supported by the rabbis and community - enter local businesses, assess the situation and complain about the employees' dress. They approach the store manager and warn him that if the saleswomen do not switch to completely modest clothes, they will see to a boycott of the store.

Some of the local store owners capitulate to the demands and in return receive a faux kashrut certification in the form of a sticker that states: "The king's daughter is glorious within. Daughter of Israel, you are the daughter of a king - dress accordingly," which is affixed to dozens of store windows around town.

"The guy came into my store and saw one of my female workers wearing a small shirt," said the owner of a shoe store, "it wasn't a tank top, just a small shirt. But he started shouting that if the worker did not dress appropriately, he would cause financial damage, and claimed 'just as you can tell the workers when to come and when to go, you can tell them what to wear.' I didn't want to hurt my business and therefore I agreed, and I received certification."

Another local merchant, the owner of housewares store, described what happened to him. "Two weeks ago one of the guys came into my store," he said. "'I have the entire ultra-Orthodox community behind me. If you don't sign this paper and affix the sticker, we will boycott you,' he said to me. I didn't give in to his degenerate blackmail, but I didn't want to get into a fight with the whole ultra-Orthodox community and that's why I didn't file a complaint with the police."

The ultra-Orthodox community in Netivot, which comprises about 25 percent of the city, denounced the phenomenon.

"It is an act that should not be done," said a senior member of the community. "This practice is unacceptable to the ultra-Orthodox community and it is leading to unfounded hatred among the residents of Netivot, who were always united and never had tension among them."

The ultra-Orthodox figure also said he believed the group had no influence over the consumer habits of the community members.

"It is possible that there are a small number of people who follow their rules but they are a minority," he said.

According to him, the rabbis do not officially criticize the phenomenon because they "think it is nonsense." 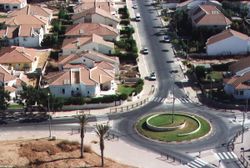 Religious tension between the different populations in Netivot barely exist normally. The last time the city saw contention was before the city council elections, when ultra-Orthodox residents protested against the opening of pubs in Netivot, though the demonstrations died down after a few days. The punishment the group imposes on stores that refuse to cooperate is their omission from the list of recommended stores distributed by the ultra-Orthodox community. They don't only target housewares and shoe merchants, but also other establishments.

"Three weeks ago an ultra-Orthodox guy showed up at the gas station," said the manager of the station. "He threatened me that if we didn't stop playing music here and if the local papers that I sell on Fridays didn't disappear, then he would make sure that no ultra-Orthodox person from Netivot would set foot in my gas station and I wouldn't appear in the list of recommended stores that he distributes."

"It's simply a disgrace, I know that he doesn't represent the entire ultra-Orthodox community, but he is harming the relations between the city's communities and heating things up there," he said.

The Case of Rabbi Yoram Aberjil.

"One of my female workers wearing a small shirt. It wasn't a tank top, just a small shirt.…he started shouting that if the worker did not dress appropriately, he would cause financial damage."
Failed messiah was established and run in 2004 by Mr. Shmarya (Scott)Rosenberg. The site was acquired by Diversified Holdings, Feb 2016.