It was cleared for publication on Tuesday that a Jerusalem resident was arrested for suspicion of starving her two-year-old son. 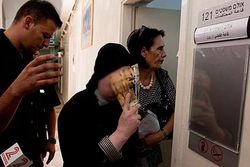 The toddler, who had reached a weight of only seven kilos (about 15 pounds), is hospitalized at Hadassah Ein Kerem Hospital in serious condition.

During a Jerusalem Magistrates' Court hearing on the extension of the woman's remand, Judge Alexander Ron called the affair "the worst of the worst."

It is suspected that the woman, who is not cooperating with investigators, suffers from Munchausen syndrome by proxy, a psychiatric disorder wherein those affected abuse someone else, typically a child, in order to draw attention or sympathy to themselves.

During the court hearing it was revealed that the child was hospitalized for the first time at Hadassah Mount Scopus Hospital in September 2007 when he was only a year and seven months old with a fever and inflammed oral wounds. He refused to eat or drink and vomited. The toddler was released after two days and has since been admitted to the hospital on seven different occasions. He was transferred to Hadassah Ein Kerem in February 2009 and has been there ever since. Apart from malnutrition, the toddler also suffers from hair loss.
The suspecting medical staff at Hadassah Ein Kerem installed security cameras in the child's room. To their horror, the footage showed the woman disconnecting her son from his feeding tube. In other cases, she poured unknown substances into the tube.

The hospital proceeded to inform welfare authorities at the Jerusalem Municipality of the case. Police initially asked to arrest the mother at the hospital, but the hospital's management would not allow it. She was eventually detained during a meeting with a social worker.

It was later revealed that the woman is a member of the Neturei Karta community. She has other children and is currently pregnant. Hospital officials said there was an improvement in the toddler's condition since the mother's arrest and that he is able to eat without the use of a feeding tube. They said he is not vomiting.

On Sunday the municipal welfare office, located near the Jerusalem's Ultra-Orthodox Mea Shearim neighborhood was set on fire in protest of the woman's arrest. No suspects have been detained as of yet, but police investigators said they knew who was behind the act.

Tuesday saw a development in another child abuse case in Jerusalem, whereby Brazilian authorities denied Elior Chen's request to be granted refugee status, thus paving the way for his extradition to Israel.

Chen, a self-proclaimed "rabbi" who fled Israel to Brazil to escape trial for his involvement in numerous cases of the most horrific child abuse in recent memory, turned himself in to Brazilian law enforcement authorities in Sao Paulo in June.

Chen has been identified as the leader of a group of religious parents some have called a cult, to which he provided the "spiritual inspiration" that led his followers to torture their children.

Yael Branovsky contributed to the report.