"I emigrated to this country in the belief that here religious freedom is sacred. Doctors and nurses shouldn't be forced to abandon their beliefs and participate in abortion in order to keep their jobs."

A Brooklyn nurse claims she was forced to choose between her religious convictions and her job when Mount Sinai Hospital ordered her to assist in a late-term abortion against her will. 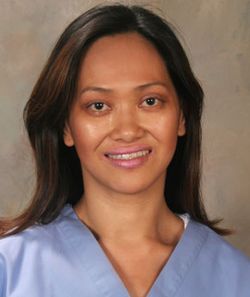 The hospital even exaggerated the patient's condition and claimed the woman could die if the nurse, a devout Catholic, did not follow orders, the nurse alleges in a lawsuit.

"It felt like a horror film unfolding," said Catherina Cenzon-DeCarlo, 35, who claims she has had gruesome nightmares and hasn't been able to sleep since the May 24 incident.

The married mother of a year-old baby was 30 minutes into her early-morning shift when she realized she had been assigned to an abortion. She begged her supervisor to find a replacement nurse for the procedure. The hospital had a six-hour window to find a fill-in, the suit says.

Bosses told the weeping Cenzon-DeCarlo the patient was 22 weeks into her pregnancy and had preeclampsia, a condition marked by high blood pressure that can lead to seizures or death if left untreated.

The supervisor "claimed that the mother could die if [Cenzon-DeCarlo] did not assist in the abortion."

But the nurse, the niece of a Filipino bishop, contends that the patient's life was not in danger. She argued that the patient was not even on magnesium therapy, a common treatment for preeclampsia, and did not have problems indicating an emergency.

Her pleas were rejected, and instead she was threatened with career-ending charges of insubordination and patient abandonment, according to the lawsuit, filed Tuesday in Brooklyn federal court.

She said she later learned that the hospital's own records deemed the procedure "Category II," which is not considered immediately life threatening.

"I felt violated and betrayed," she recalled. "I couldn't believe that this could happen."

A native of the Philippines, Cenzon-DeCarlo moved to New York in 2001 and started at Mount Sinai on the East Side as an operating-room nurse in 2004. During her job interview, an administrator asked Cenzon-DeCarlo whether she'd be willing to participate in abortions. She flatly said no.

The nurse said she put her beliefs in writing.

The day after the procedure, Cenzon-DeCarlo filed a grievance with her union. Later that week, she was cornered by two supervisors who told her if she wanted any more overtime shifts, she would have to sign a statement agreeing to participate in abortions, the suit says.

The next month, Cenzon-DeCarlo was assigned to one overtime shift, rather than the eight or nine she usually received, the suit claims.

Although the Brooklyn resident is still working at Mount Sinai, she's asking a court to order the hospital to pay unspecified damages, restore her shifts and respect her objections to abortion.

"I emigrated to this country in the belief that here religious freedom is sacred," Cenzon-DeCarlo said. "Doctors and nurses shouldn't be forced to abandon their beliefs and participate in abortion in order to keep their jobs."

Providing legal advice for her action is the Alliance Defense Fund, a Christian group seeking to put a national spotlight on the case. The suit also seeks to force Mount Sinai to give up federal funding it receives, because it failed to uphold a federal rule protecting employees who have moral objections to controversial procedures.

"The law provides protections for individuals who object to performing abortions, but at the same time, health-care professionals are not permitted to abandon patients," Sherwin said.

"I emigrated to this country in the belief that here religious freedom is sacred. Doctors and nurses shouldn't be forced to abandon their beliefs and participate in abortion in order to keep their jobs."
Failed messiah was established and run in 2004 by Mr. Shmarya (Scott)Rosenberg. The site was acquired by Diversified Holdings, Feb 2016.