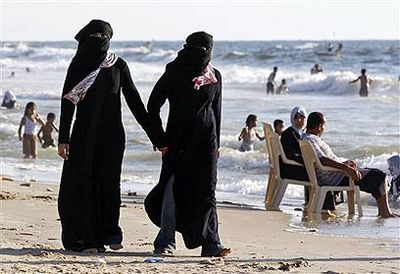 A "virtue campaign" is being spread in Gaza by the Religious Affairs Ministry in a list of dos and don'ts that feature on posters and in mosque sermons. It also calls for gender separation at wedding parties and tells teens to shun pop music with suggestive lyrics. "We have to encourage people to be virtuous and keep them away from sin," said Abdullah Abu Jarbou, the deputy religious affairs minister.

On a Gaza beach, Mohammed Amta, 18, said a plainclothes security man told him to put on a shirt, saying his appearance was un-Islamic, and to remove his two silver rings and woven bracelet because they were a sign of Western culture.

A lifeguard said he was told to wear an undershirt and knee-length shorts. "They said that's how Muslims should dress," he said. He declined to be named, fearing he would lose his Hamas-provided job.

Police are enforcing the restrictions on mannequins and salesmen say they ripped off the tags on packages of panties and bras which showed women in underwear. Enforcement is spotty and seems restricted to working-class markets. Most traders said they moved the mannequins back after police left.

In addition, Abdel Raouf Halabi, Gaza's chief supreme court judge, this month ordered female lawyers to wear head scarves and dark robes or be barred from courtrooms when their work resumes September 1. "We will not allow people to ruin morals," he explained.

It's all part of a new Hamas campaign to get Gazans to adhere to a strict Muslim lifestyle and the first clear attempt by the Islamic militants to go beyond benign persuasion in doing so. It suggests that having consolidated its hold on Gaza in the two years since it seized control by force, Hamas feels emboldened enough to extend its ideology into people's private lives.

Hamas insists compliance with its "virtue campaign" is still voluntary and simply responds to a Gazan preference for conservative ways. But the rules are vague and there are reports of alleged offenders being beaten and teachers being told to pressure girls to wear head scarves.

Hamas, known for its keen sense of public opinion, pledged after its June 2007 takeover to refrain from imposing Islamic ways. Khalil Abu Shammala, a human rights activist in Gaza said that is all changing, "There are attempts to Islamize this society". Hamas' denials "contradict what we see on the street."

Gaza maintains small islands of secularism. Foreigners are rarely harassed, and Gaza women in stylish clothes and hairdos, many of them Muslims, frequent a half-dozen upmarket cafes and restaurants.

Last month, three young men walking on the beach with a female friend said they were beaten by Hamas police, detained and ordered to sign statements promising not to engage in immoral activities." The Hamas government condemned the beatings. But it remained silent when a Hamas leader, Younis Astal, accused UN-run summer camps for tens of thousands of children of spreading drug use and encouraging "obscene behavior" for teaching swimming and folklore dance.

Abu Jarbou, the deputy minister, insisted that Hamas would move gradually and not impose its views by force. Still, Islamic law is coming, he said.

"In the future, it's inevitable it will be implemented," he said.

Posted at 11:11 AM in Israel, Religion, Religion & State | Permalink

Campaign calls for gender separation at wedding parties and tells teens to shun pop music with suggestive lyrics.
Failed messiah was established and run in 2004 by Mr. Shmarya (Scott)Rosenberg. The site was acquired by Diversified Holdings, Feb 2016.