Letter From Jerusalem:
How Should Police Respond To Haredim Who Call Them Nazis?

“They called me Nazi. Their chutzpa is unbelievable. How dare they?"

What’s the proper response?
How should police officers respond to harsh insults directed at them? 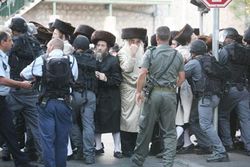 During one of the protests over the starved child affair, a uniformed Army Radio reporter emerged out of the haredi masses. He was livid with anger. “They called me Nazi,” he told his colleagues. “Their chutzpa is unbelievable. How dare they?

I felt for him. Regardless of the ancient question of why the IDF employs its soldiers in journalistic jobs, and when will we see a brave defense minister end this longtime anomaly, the soldier was right to feel insulted, both on the personal and national level.

The ease with which haredi protestors hurl the word “Nazi” at any person wearing a uniform, be it green or blue, is intolerable. It is no less infuriating, and possibly more so, than the soiled diapers hurled at police officers.

What is the proper way to respond to an insult? This question has stirred up great emotion in America in recent days. Harvard Professor Henry Louis Gates returned to his home in Cambridge, Massachusetts, the door was jammed, and he had to break into his own house. A neighbor called the police. When the officers arrived, Gates presented ID that showed he lives in the house. Such incidents usually end with a handshake, but Gates was arrested. 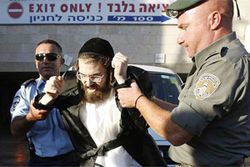 The incident turned into a national affair because of Barack Obama’s reaction. In a press conference, the president said that the police acted “stupidly.” The statement prompted renewed suspicions regarding Obama’s loyalties: Is he concerned for law and order in America, or only for the wellbeing of blacks?

Obama consulted with his wife and immediately issued a retraction. Now, they’re all good guys in his view – the police officers and the professor. A three-way reconciliatory meeting will be held at the White House soon.

Determination and sensitivity
Yet the question of what should be done to a person who insults law enforcement officials remained open. The New York Times, which looked into the issue, had trouble drawing conclusions. “Police departments issue their officers Kevlar vests to stop bullets, and thick helmets,” the paper wrote, “but there is nothing in the equipment room to give a cop thicker skin.”

The police officers interviewed for the piece made a distinction between a private insult and one uttered publically. They are willing to sustain face-to-face insults, but felt they must respond to public insults.” You don't get paid to be publicly abused,” said one officer. “"We have to remain in control. We're running the show,” said another. I heard similar sentiments expressed a few years ago in a briefing to riot police in Jerusalem.

It appears that everything can be summed up with the slogan coined by the IDF on the eve of the Gaza disengagement: Determination and sensitivity. Determination requires a response, while sensitivity requires one to bite the bullet. 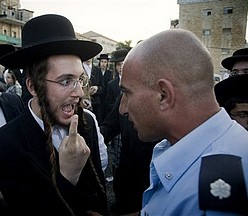 This is particularly true in respect to the violent margins of the settlement enterprise. The hatred for the police there is even greater than in the haredi and Arab community. The modus operandi is also more sophisticated: Cameras monitor police officers who resort to force in response to verbal insults. At times, a reckless policeman is restrained this way, and this is commendable. Other times, the life of an excellent officer is ruined.

Israeli police officers who read about the insult directed at the policeman in Cambridge responded with laughter: Police officers and soldiers in Israel sustain much harsher insults in the settlements and in haredi neighborhoods. Often they pretend not to hear it. It’s humiliating, it’s frustrating, but usually it’s the right move.

Those who have power must simultaneously develop thick skin. This is true first and foremost for politicians; it’s also true for police officers, soldiers, and journalists. People in these fields have been given great power; they are not meant to misuse it.

Posted at 01:17 AM in Crime, Litigation, etc., Haredim, Israel | Permalink

Letter From Jerusalem:
How Should Police Respond To Haredim Who Call Them Nazis?

“They called me Nazi. Their chutzpa is unbelievable. How dare they?"
Failed messiah was established and run in 2004 by Mr. Shmarya (Scott)Rosenberg. The site was acquired by Diversified Holdings, Feb 2016.