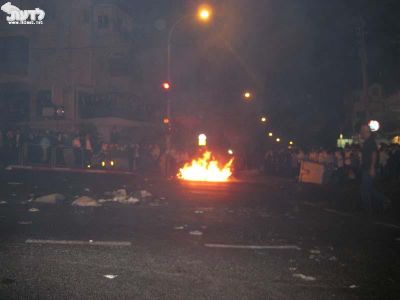 Speaking on Army Radio Wednesday morning, Kraus's statement came after a night of haredi riots in the capital, protesting the arrest of a Jerusalem woman apparently suffering from a psychiatric disorder, whose arrest for allegedly near-starving her three-year-old son to death was made public by police on Tuesday. 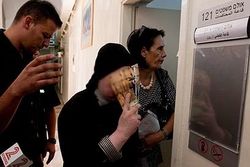 The mother of four, a member of the extreme Natorei Karta hassidic sect in Jerusalem who is five months pregnant, is suspected of severely abusing her child for two years, until he weighed a mere 7 kilograms, according to police investigators.

She was arrested last week during a meeting with a social worker.

A man who tried to move a burning garbage bin from the street was lightly injured when he was hit in the head by a stone. The man was taken to Jerusalem's Hadassah-University Hospital at Mount Scopus.

The young boy, who is hospitalized at Hadassah-University Hospital in serious condition, has been in and out of hospitals seven times over the past two years, suffering from high fever, vomiting, inflamed oral wounds and severe weight loss, police told a Jerusalem court during a Tuesday remand hearing. In addition to severe malnutrition, the child was found to be suffering from hair loss. 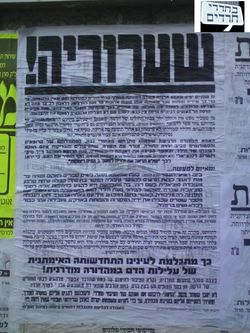 A series of medical tests subsequently performed by hospital surgeons to determine why the toddler could not eat or drink did not uncover any internal problems, the police said.

After all the tests came out negative, medical staffers who treated the boy for what seemed to be "failure to thrive" began to suspect the child had in fact been abused by his mother.

Dr. Yair Birnbaum, deputy director-general of the Hadassah Medical Organization, said that after noting that the symptoms did not result from a physical disease they had become more and more convinced that the problem was intentional abuse.

Then, after efforts to feed the child intravenously during one of his hospitalizations failed, security cameras installed in the room revealed that the mother had in fact disconnected the feeding tubes, and in some instances poured unknown substances into the tube, the police said.

The hospital then contacted welfare authorities, who did not have any previous record against her - though at least one doctor who had treated him had suspected the malnourished child was being mistreated.

The woman, a Mea She'arim resident, apparently suffers from Munchausen syndrome by proxy, a psychiatric disorder wherein those affected abuse someone else, typically a child, in order to draw attention or sympathy to themselves.

In the rare syndrome, an individual - usually a mother - deliberately makes another person - generally her own preschool child - sick or convinces others that the person is sick. The parent or caregiver misleads others into thinking that the child has medical problems by lying and reporting fictitious episodes.

The perpetrators usually derive satisfaction from gaining the attention and sympathy of doctors, nurses and others who come into contact with them or possibly from being able to deceive people they consider to be more important and powerful than themselves.

The child's health has improved since he was separated from his mother, the court was told. Although still hospitalized in serious condition, he is now able to eat normally without vomiting and has gained 20 percent of his body weight.

The child's mother was remanded in custody for five days by the Jerusalem Magistrate's Court on Tuesday - her second remand hearing since her arrest - as police pursue the investigation.

A court gag order was lifted Tuesday afternoon, although the suspect's name cannot be published due to the involvement of minors in the case.

The woman is not cooperating with police, nor is her husband, a yeshiva student, who is now at home with their other children.

The boy's father, who was at the court remand hearing, claimed he didn't know about his wife's actions.

Police are investigating whether any of the couple's other children were similarly abused.

The police investigation of the children is compounded by the fact that they do not speak Hebrew.

The news of the woman's arrest sparked renewed rioting Tuesday night by members of the extremist haredi organization, which has been leading violent, month-old protests against the opening of a parking lot in the city on Saturdays.

On Sunday, haredim torched the neighborhood welfare office to protest the fact that the suspect was arrested there.

It was not immediately clear if the arrest in the abuse case within the community would further inflame the Sabbath protests.

At the urging of the defense, the court told prison officials to take into account that the alleged child abuser was five months pregnant, ate only food certified kosher by the Eda Haredit organization and had difficulty residing among smokers.

Judy Siegel contributed to this report.

Ladaat.net has an amazing video taken from inside the riot. Apparently the riot ended after announcements were made saying "rabbis" wanted everyone to go home.. Those announcements were made, it seems, after police promised leaders of the Toldos Aron sect that the woman would be released from jail in the morning. In the video you get a sense of how large and threatening the demonstration is. Clearly there are hundreds of haredim involved.

Posted at 02:50 AM in Crime, Litigation, etc., Haredim, Israel | Permalink