« Letter From Jerusalem:How Should Police Respond To Haredim Who Call Them Nazis? | Main | Payment of $1 Million State Fines by Agriprocessors "Unlikely" »

30 years ago, 3000 hasidim stormed a police station and sacked it, injuring 62 police officers in the process. 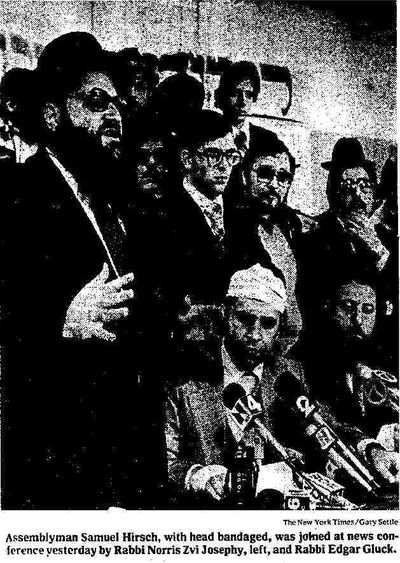 LIKE THE Shakers and the Amish and other such fundamentalist recluses, the thousands of Eastern European Hasidic Jews who in the 1940s began to colonize the Brooklyn neighborhoods of Williamsburg and Crown Heights and Borough Park eventually found themselves in collision with the more secular way of life around them.

Sometimes it was those less mystical Reform Jews, the ones whose modern ways they had renounced several centuries earlier, with whom they didn't get along. "Caricatures," Rabbi Nathan Perilman of Manhattan's Temple Emanu-El called the Hasidim. "Grotesque distortion of Judaism." Sometimes they didn't get along with the state: The Brooklyn Hasidim were furious in the mid-1950s, for example, when they discovered that they could not have public housing projects all to themselves. Sometimes they didn't even much get along with one another; it was not unknown for the bearded men and the shawled and turbaned women of the Satmar and Lubavitch sects to physically clash.

But mostly, as time went on and their poor but settled areas began filling with more and more blacks and Puerto Ricans, they didn't get along with their new neighbors - the younger specimens of whom, it was true, menaced them quite regularly. There were robberies, rapes, killings. By the mid-1960s, with the tacit approval of the police, Hasidic vigilante squads called Maccabees were prowling the streets in radio cars. Incident followed incident, and by the mid-1970s, nevermind who started what, rock-throwing street melees among blacks and Puerto Ricans and Hasidim were everyday political realities in racially tense Brooklyn, and the cops were usually caught in the middle, standing ever accused by one bunch of showing favoritism to another. 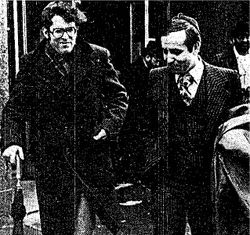 In the summer of 1978, frankly, it did seem that the Hasidim enjoyed a position of some social privilege. They were a significant voting bloc, their rebbes courted by every candidate for office. Lubavitcher headquarters on Eastern Parkway in Crown Heights had a 24-hour police guard. Meanwhile, a year after the blackout riots, blacks were angrier than ever, bitter victims of the War on Poverty's unfulfilled promises, and they perceived the Hasidim to be disproportionately more advantaged than they were at the community board level. Race-baiting black leaders such as the Rev. Herbert Daughtry were fond of reminding audiences that the city's new mayor, Edward Koch, was a Jew.

One June day in Crown Heights, a snickering black kid knocked the hat off a passing Hasidic man and was then pounced upon by a Hasidic mob and stomped into a coma. Blacks were enraged. And then, when police charged two of the attackers with attempted murder, the Hasidim were enraged as well.

THE TOWN had not entirely blown up over this incident, but hard feelings remained. In Borough Park on Saturday morning the 2nd of December, when an elderly Jew was stabbed to death by three Puerto Rican youths as he walked home from synagogue, the news raced through the Hasidic community before the old man ever got to the morgue, and all at once there were more than 3,000 Hasidim mobbed outside the 66th Precinct stationhouse on 16th Ave., charging the door and howling for blood.

In 30 minutes of battle with riot cops, they beat up 62 officers, smashed windows, wrecked station equipment, destroyed files and briefly succeeded in occupying the premises - reportedly the first time since the Civil War that a civilian crowd had taken over a New York police station. Six of their own were injured as well, including Brooklyn Assemblyman Samuel Hirsch, who immediately started crying police brutality. "There is a virulent strain of anti-Semitism in the Police Department," he charged.

It did not occur to some other observers that police anti-Semitism was necessarily the issue here. Throughout the black communities it was widely wondered: What if it had been 3,000 blacks storming that police station? What do you suppose would have happened? You'd have 300 dead black people, wouldn't you?

"I would hope that wouldn't be so," said Koch, hopefully.

But the Jewish mayor had a problem. "When you hit a cop, you break the law," the Daily News' Pete Hamill reminded him. "Koch cannot risk looking as if he has two standards about civic disorder. He cannot lecture the Rev. Daughtry and excuse the Hasidim."

AND SO Koch found it necessary to hold the rioting Jews of Borough Park accountable. "Nobody is going to get their way in this town by force," he declared emphatically. "Nobody. It doesn't matter if you're Jewish, Italian, black, Hispanic or other." Accordingly, a few rioters were eventually rounded up and charged, and they raised shouts to the heavens that Cossack persecutors were terrorizing them once again, and it became evident that Brooklyn's Hasidim very much considered themselves to have joined the ranks of the city's professionally aggrieved.

"Even the Hasidim," wrote News columnist I.D. Robbins, "are finding the courage to face or defy the real world outside of their tight little communities."

Hirsch and the other arrested haredim used Roy M. Cohen as their defense attorney. Cohen did the job pro bono.

On December 18, 1979, Hirsch and his aide had their chrges conditionally dropped, as the New York Times reported: 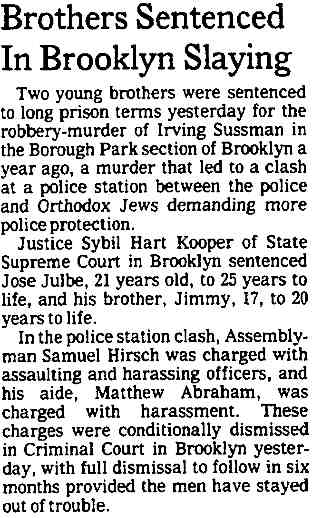 This doesn't mean Hirsch was innocent. It means the court chose to drop the charges if Hirsch could behave himself for a few months. It's like a plea bargain.

One of the officers Hirsch injured worked as a plain clothes decoy in the neighborhood. Dressed as a hasidic Jew, the officer roamed alone waiting to get mugged. He twice was, sustaining injuries both times. But he apprehended his attackers. This officer, Paul Fried, is Jewish.

That did not stop Hirsch from claiming the police were antisemitic and used excessive force in quelling the riot.

Hirsch was defeated in the 1982 elections by Dov Hikind, who still holds the seat today.

Hirsch was on Zev Brenner's radio show Saturday night 7-25-2009, where he said Solomon Dwek, the Cooperating Witness in the FBI sting against haredi rabbis for money laundering and organ trafficking, "should have been killed."

Hirsch also said it is forbidden to cooperate with police or to "moser" on a Jew.

Posted at 02:41 AM in Crime, Litigation, etc., Haredim, History | Permalink

30 years ago, 3000 hasidim stormed a police station and sacked it, injuring 62 police officers in the process.
Failed messiah was established and run in 2004 by Mr. Shmarya (Scott)Rosenberg. The site was acquired by Diversified Holdings, Feb 2016.