« Letter From Jerusalem:The Destruction of the 3rd Temple | Main | Haredi Man Arrested With 15 Lbs Of Cocaine Strapped To His Body »

Haredim have intensified their campaign against authorities over the case of the woman suspected of starving her three-year-old son, printing 500,000 copies of a booklet entitled, "Blood Libel." 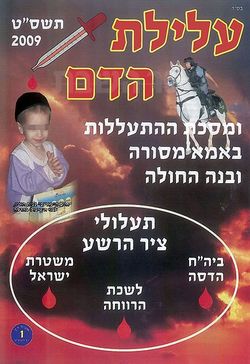 The 16-page booklet, showed on Channel 2 on Wednesday, refers to the "Axis of Evil" of Hadassah Hospital, police and welfare services.

It also contains pictures of police rounding up haredi protesters, with the question: "Doesn't this remind you of Iran?"

A logo of a knife dripping with blood appears on each page.

The television channel noted that the booklet was being distributed ahead of an expected indictment of the woman. It also said that the timing, Tisha Be'Av eve, was not coincidental, explaining that since ultra-Orthodox Jews don't read any joyous material during the fast, the chances were high that the booklet would be widely read in haredi circles.

500,000 booklets distributed to haredim on Erev Tish B'Av.
Failed messiah was established and run in 2004 by Mr. Shmarya (Scott)Rosenberg. The site was acquired by Diversified Holdings, Feb 2016.