Man converted while serving in the Army under the auspices of the IDF Rabbinate.

A newly married convert to Judaism whose marriage was not recognized by a local rabbi has been advised by the Religious Affairs Ministry to travel over 100 kilometers and pay an additional NIS 600 to sort out the issue. 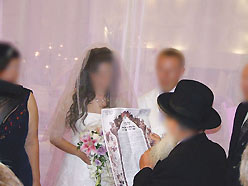 Y., an immigrant from the former Soviet Union, was married on June 24 in Rishon Lezion after registering at the local rabbinate. An employee of the Rishon Lezion Rabbinate, Rabbi Haim Ben-Tzadok, conducted the marriage.

However, a few weeks after the huppa, when Y. and his bride attempted to register their marriage at the city rabbinate, Rishon Lezion Ashkenazi Chief Rabbi Yehuda David Volpe refused to oblige because of Y.'s convert status.

If a marriage is not registered at the rabbinate, the couple is not officially considered married.

Halachicly, at least according to Ben-Tzadok and all other rabbis who recognized conversions performed by the IDF's rabbinical courts, Y. and his bride are a full-fledged couple. However, in a meeting with Volpe, Y., his bride and his mother-in-law were told that Y.'s conversion - performed while he was in the IDF and authorized by the Chief Rabbinate - was no good, Y. said in a telephone interview with The Jerusalem Post.

"Most of the time, my mother-in-law spoke with the rabbi in Yiddish," said Y. "He told us that if we wanted him to register the marriage, I would have to go through another conversion."

An official in Margi's office told a lawyer working with ITIM that the fastest way to handle the matter was to turn to a different rabbi and pay the NIS 600 fee again. The recommended rabbi is located over 100 km. from Rishon Lezion.

As a result of an inquiry by the Post, Margi said Thursday evening that he would direct the rabbi who agreed to register Y.'s marriage not to charge NIS 600. However, there was no way of registering the couple in Rishon Lezion, since Volpe was intransigent. Therefore, the couple would be forced to travel to a different location.

A spokeswoman for the Religious Affairs Ministry added that steps would be taken to make sure similar incidents did not take place in the future. However, she declined to say precisely what steps.

The spokeswoman added that a legal adviser in the ministry had originally advised Y. and his wife to go to a specific rabbi in order to save time and that Margi had not been aware of the incident.

Rabbi Shaul Farber, head of ITIM, said it was unacceptable that a rabbi who received a state salary was unwilling to recognize a conversion conducted by state institutions.

"I don't think the rabbi should be forced to approve of a conversion which he thinks is not legitimate. That's his prerogative," Farber said. "But he should not be receiving a salary from the state if he does not want to listen to the state."

Y., who immigrated to Israel alone and served in the IDF without a family to support him, said that while he did not adhere to all Orthodox laws, he nevertheless had a strong religious feeling of connection to the Jewish people.

"There is something deep inside me that makes me want to celebrate the holidays and keep tradition," said Y.

Man converted while serving in the Army under the auspices of the IDF Rabbinate.