Israel does not, at this point in time, need to conduct a massive purchase of H1N1 vaccinations, as the antidote is currently not fully ready, Deputy Health Minister Ya'acov Litzman said on Wednesday, while admitting that professionals in his ministry are in favor of such a purchase in face of their prediction that one of four Israelis will contract swine flu over the winter. 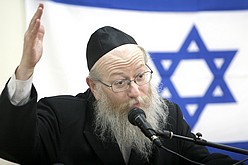 Speaking on Army Radio, Litzman maintained that Tamiflu, an anti-viral drug that reduces the risk of complications, is sufficient means for dealing with the spreading epidemic.

"There is currently no vaccination going on in Israel," Litzman said. "We would be prepared to invest a lot of funds into it, but there is simply no need. And besides, by the time the vaccination would arrive, the winter will already have passed."

Litzman addressed fears within the professional ranks of his office, according to which if Israel does not hurry up and order the vaccination, the stock will already be exhausted by orders placed by other Western countries.

"There is no point in putting money into a vaccination, without definite knowledge of its efficiency. While the assessment that many people will contract the virus in the winter may prove correct, there is no need to worry - there are antidotes, and the illness is mild," he said.

On Monday, the Health Ministry announced the first patient to die of complications of the H1N1 virus in Israel.

The man, 35, died at Josephthal Hospital in Eilat over the weekend. He had been described by the ministry as "overweight and a heavy smoker" because of a 30 body-mass index and having smoked one-and-a-half packs of cigarettes a day for years, but the family has filed a malpractice suit, claiming his case was "not treated seriously enough" at the southern government hospital.

So far, about 1,500 cases - about 30 or 40 new cases a day - have been reported in Israel. Others have gone unreported, with people who feel unwell just staying at home and not going to their doctors.

Litzman's ministry is planning a public education campaign for the autumn to reduce prevalence of the flu and to encourage vaccination against conventional influenza, which could combine with H1N1 virus.

Judy Siegel contributed to this report.

Posted at 07:34 AM in Haredim, Israel, Med-Ethics, Public Health | Permalink

Rabbi Yaakov Litzman refuses to order the vaccine. Professional staff fears the worst.
Failed messiah was established and run in 2004 by Mr. Shmarya (Scott)Rosenberg. The site was acquired by Diversified Holdings, Feb 2016.