BREAKING! Hershey Friedman: Rubashkins Will Continue To Work For Agriprocessors

A Montreal businessman poised to buy the Agriprocessors meatpacking plant vowed Friday that the former owners would have no roles in ownership or in upper management.

Hershey Friedman said a few members of the Rubashkin family might continue to work at the Postville plant, but he said they would not be investors, and they would have no say in the plant’s direction. “They are not part of it, and they never will be part of it,” he said. 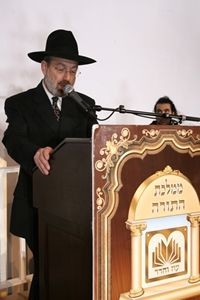 The Rubashkin family built the Postville business into the nation’s leading kosher-meat supplier before seeing it collapse into bankruptcy last year. Sholom Rubashkin, who used to run the plant, faces federal and state criminal charges for allegedly using illegal immigrants and children as workers and for allegedly defrauding the company’s creditors. Government officials have said any new owners must have no connection to the Rubashkins.

Friedman had been quiet since his name surfaced a few weeks ago as a likely buyer of the plant. But he recently told an Israeli news magazine that the Rubashkins are “wonderful people” who were “victims of a massive witch hunt.”

In a phone interview with The Des Moines Register today, he said he was only referring to some of the Rubashkins. “It’s a very large family,” he said. “There are nice people in it and not-nice people.”

Agriprocessors spiraled down after a huge immigration raid in May 2008, in which hundreds of its workers were arrested because they were in the country illegally. The company has been in bankruptcy since last fall, and it briefly closed. In recent months, it has maintained limited production of poultry, but it has not been processing beef, and it has not been employing nearly as many workers as it used to.

Friedman said the new company would be a positive member of the Postville community, supporting both Jewish and non-Jewish causes. He declined to comment on how it would be different from the old company. “Whatever it was before is not relevant to me,” he said.

Friedman said he did not previously know the Rubashkins, who are based in Brooklyn. He acknowledged that Sholom Rubashkin’s brother Heshy has continued to work at the plant, but he said Heshy no longer is in upper management and never will be again. He said a couple of younger members of the family might continue to work in low-level jobs.

Friedman said he plans to continue using plant managers brought in by the court-appointed bankruptcy trustee, and he might also hire new executives from outside. He said he does not plan to move to Iowa, but he would visit regularly.

Friedman declined to discuss his other businesses, which reportedly include a plastics plant. He said he decided to buy Agriprocessors because he wants to help Jewish families obtain affordable kosher food.

The sale was expected to go through this week, but it was held up by technical issues in bankruptcy court in Cedar Rapids. Friedman said those issues should be cleared up quickly, and his company could take possession of the plant as soon as Monday. He said he plans to rebuild production as quickly as possible, including the resumption of beef processing. That would be good news for northeast-Iowa cattle farmers, who used to sell their livestock to Agriprocessors.

COL Live’s editor, Yehuda Ceitlin, said Friday he believes Friedman didn’t know the Rubashkins. He said Friedman is a member of a Lithuanian branch of Orthodox Judaism, called Litvish, which has few links with the Russian-rooted Lubavitch wing to which the Rubashkins and most of their supporters belong.

Ceitlin said he would not make too much out of Friedman’s quote about the Rubashkins being “wonderful people.” Even if they disagreed with some of Agriprocessors’ alleged misdeeds, many Orthodox Jews respect the family for making kosher meat available in areas where it used to be scarce, Ceitlin said. “The fact that he praised the Rubashkin family for what they’ve done and achieved is a standard view.”

The issue of possible ties to the Rubashkins would be crucial to the new company. Federal prosecutors, who have threatened to seize the business as part of their criminal case, reportedly have agreed to drop that effort if a new owner proves it has no links to the old owners.

Also, the Iowa Department of Economic Development has said it would consider helping refurbish the plant if it is bought by a reputable owner. Department Director Mike Tramontina said today he remains optimistic the situation will work out well for the company and the Postville region.

1. "Upper management" is not defined. Rubashkins in middle or low level management positions can still do much damage – especially if the titles they hold do not reflect their actual role in the new company.

2. Friedman has apparently done business with other Chabad families in the past. The idea that because he is "Litvish" he doesn't know the Rubashkins – or people close to the Rubashkins – is not credible.

3. What Friedman told Mishpacha Magazine (reprinted on COL LIve) doesn't jibe with what he said for non-Jewish consumption. Friedman told Mishpacha Magazine the Runbashkins are "wonderful people" and victims of a "massive witch hunt." This should have been important enough to warrant calling an expert on haredim for a quote regarding this. That it did not speaks volumes about the Register's grasp of the story.

4. All of this is bad news, I think, for workers and for Postville.

BREAKING! Hershey Friedman: Rubashkins Will Continue To Work For Agriprocessors