Haredi rabbis knew of abuse but did not call police or child welfare authorities, court finds.

The Jerusalem District Court on Sunday convicted the "Taliban mother," so called because she wears clothes that cover her entire face and body, of severely abusing her children. 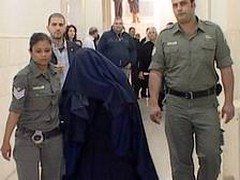 The court convicted her husband on lesser charges, including failing to report his wife's conduct to the police.

In accordance with the indictment, the mother, identified as B., was found guilty of three counts of abuse of a minor or helpless person and 25 counts of assault in aggravated circumstances.

Her husband, identified as M., was convicted of 10 counts of assault and three counts of abuse of a minor or helpless person.

According to the first charge, B. could be sentenced to up to nine years imprisonment for her mistreatment of her children.

Judge Nava Ben-Or rejected the defense's argument that the mother was mentally ill and in a psychotic state, and therefore not responsible for her actions during her assaults on her children, or that she was incapable of standing trial.

Ben-Or found that "during the [psychiatric] observation of the accused, no delusionary symptoms were found. Her thinking was absolutely coherent and there was nothing bizarre or hallucinatory that served as the cause of the violence and abuse that she perpetrated.

"The accused herself denied having delusions of grandeur and insisted that she did not regard herself as the messiah and did not show signs of pathological disassociation or lack of awareness of reality."

The affair began on the night of February 2, 2008, when neighbors of the family, who live in Beit Shemesh, saw and heard one of the children, identified in court as D., banging on the door of his apartment and begging to be let in. Although it was a winter night, he was wearing short pants and a shirt and cried that he was cold and hungry.

A neighbor phoned the police and an officer arrived at the house. He spotted the boy and immediately called the welfare authorities who came and took him away. It turned out that D. was mentally retarded.

Inside, the policeman, Gabi Ben-Lulu, found that "the house was a mess, clothes strewn on the floor, the rooms very untidy, a sink full of unwashed dishes."

B. and M. have 12 children. Only two remained at home by the time the police began their investigation, D. the mentally retarded son, and the youngest child, a girl, H., who is still a minor.

Only some of the children testified, and only one of them expressed unreserved anger at the way he had been treated by his parents.

The children described how they had been beaten with rope, electric cable, a rolling pin and other means, how they had been locked out of the house and forced to sleep outside, how they had been prevented from taking part in school and sports activities, how the mother had cut up sports shoes bought by one of the sons with his own money because sports was anti-religious, how she had declared two of her children dead and held the mourning ritual for them and how she had covered up her body and face so that the children could no longer see her.

Ben-Or concluded that the children were telling the truth.

"B. and M., each in their own way, did not dispute the resort to violence and other harm done to their children.

"Although they downplayed the force and gravity of their actions and their intent, I found the version of the children credible and those of the accused patently not credible. The impression was that the versions of the children meshed with one another in a full, logical and coherent way," the judge said.

As for the mother, "the impression one gets from her testimony to the police is that she is a manipulative woman who manages to mobilize all sorts of reasons to deflect the questions of her interrogators and to lie in order to downplay the severity of those actions which she decided not to deny."

For example, the judge wrote, she accused one of her children of "blatantly lying" about her behavior and when asked why she thought he had done so, replied that he was probably "subconsciously bitter" because she had not held him when he was a baby because she was already pregnant again.

Asked by the police why another of her sons had also accused her of assaulting him, she replied that the first son had probably told the second one what to say.

At the end of her 128-page decision, Ben-Or criticized religious and state institutions for failing to take action throughout the many years that the abuse took place. One of the children had gone to a local rabbi and asked him to intervene. The rabbi said he spoke to the parents but could not influence them, then dropped the matter.

The Bnei Brak rabbinical committee was also notified of the problems in the family but did nothing. The schools did nothing even though all the girls were pulled out of class after fifth grade and the boys were clearly suffering. The welfare authorities also did nothing, wrote Ben-Or.

"An entire family, 12 children, disappeared from the social security net, the community, the schools and the welfare authorities," she wrote. "No one came to their rescue."

Posted at 03:30 AM in Crime, Litigation, etc., Haredim, Israel | Permalink

Haredi rabbis knew of abuse but did not call police or child welfare authorities, court finds.
Failed messiah was established and run in 2004 by Mr. Shmarya (Scott)Rosenberg. The site was acquired by Diversified Holdings, Feb 2016.