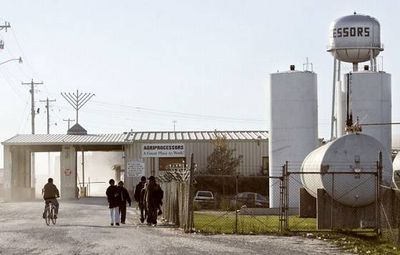 The company buying Agriprocessors has asked a bankruptcy judge to reject a $400,000 reimbursement request from the bankruptcy trustee, alleging wasteful spending and inadequate documentation.

SHF Industries LLC says in a motion that property at the company’s Postville plant is being insured at a value double the appropriate amount, and that some of the insured vehicles are not owned by Agriprocessors.

In addition, SHF says, it appears that the trustee is insuring some repossessed vehicles that personal vehicles of the Rubashkin family that owns the company but no longer has a role in operations.

About $107,000 of the $400,000 in fees submitted by Triax Advisors were attributed to the case controller, Alan Rice, according to the motion filed by Des Moines attorney Brad Epperly.

The motion says Rice failed to provide details on how he spent 427 hours on the case, which were billed at $250 per hour.

Triax has refused, despite SHF’s request, to certify the accuracy of its financial information, the motion says, and the party incurring expenses is not named in many of the claims.

SHF cited eight $5.35 items billed only as “gym” with no indication of who incurred the charges.

Dan Childers, Triax’s Cedar Rapids-based attorney in the case, was not available Thursday for comment.

I saw the trustee's expense filing a few weeks ago and I spoke with an experienced source extremely close to this bankruptcy.

What Dave DeWitte doesn't tell you is that these fees, as outlandish as they may seem, are normal.

This is not about excessive charges or sloppy bookkeeping on the part of Triax. It's all about Hershey Friedman's way of doing business.

Wants judge to reject $400,000 bill from trustee.
Failed messiah was established and run in 2004 by Mr. Shmarya (Scott)Rosenberg. The site was acquired by Diversified Holdings, Feb 2016.