64% of Israelis Want to Rebuild Temple

80% of Israelis said it is correct for the country to remember the destruction of the Temple on Tisha B'Av. 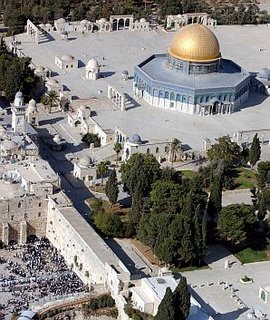 Survey: 64% want Temple rebuilt
Almost two thirds of Israelis, including half of seculars would like to see Temple rebuilt, believe it is important to commemorate Tisha B'Av
Ynet

About two thirds of the public want the Temple rebuilt, including about half of secular Israelis, a new survey conducted for Ynet and the Gesher organization revealed.

The survey was held by the Panels Institute among 516 respondents that are a representative sample of the adult Jewish population. The margin of error was 4.3%.

Initially, the respondents were asked what happened on Tisha B'Av (Ninth of Av), and showed impressive knowledge. Ninety-seven percent responded that the Temple was destroyed, while only 2% said they did not know.

The second question was whether respondents wanted to see the Temple rebuilt. Sixty-four percent responded favorably, while 36% said no. An analysis of the answers showed that not only the ultra-Orthodox and the religious look forward to the rebuilding of the Temple (100% and 97% respectively), but also the traditional public (91%) and many seculars – 47%.

When asked whether it was at all justified to mark something that had happened 2,000 years ago, 80% said that it was, while 13% said only events related to the State of Israel should be commemorated.
Another 7% categorically replied with a "no."

Here too an analysis of the answers revealed that the positions on Tisha B'Av transcended religious divisions – 74% of seculars and 100% of ultra-Orthodox responded that dates like Tisha B'Av should be commemorated.

Gesher Director General Rabbi Danny Tropper told Ynet in response to the survey results: "We are a nation with a remarkable historic affinity. The Temple was destroyed 1,942 years ago, and almost two thirds of the population want to see it rebuilt, including 47% of seculars.

"I don't think this is a practical proposal, but it seems that Tisha B'Av really does constitute a day of meaningful memory to most of the people."

64% of Israelis Want to Rebuild Temple

80% of Israelis said it is correct for the country to remember the destruction of the Temple on Tisha B'Av.
Failed messiah was established and run in 2004 by Mr. Shmarya (Scott)Rosenberg. The site was acquired by Diversified Holdings, Feb 2016.