Shabbat war escalates: A man of about 20 fell off a fence and sustained serious wounds during an ultra-Orthodox protest in Jerusalem Saturday. A six-year-old boy and four police officers were also wounded in violent riots in the capital during the day.

However, by nighttime a vehicle equipped with a public address system was traveling through Jerusalem's haredi neighborhoods on behalf of the ultra-Orthodox sect and urging protestors, upset over the opening of a municipal parking lot on Shabbat, to end the riots.

Meanwhile, a senior Jerusalem Police official told Ynet that officers "had no connection to the injury suffered by the young Orthodox man at the protest this evening."

The police official said the man fell off a fence during an illegal Orthodox demonstration.

"We condemn and denounce the haredi riots, and we stress that the police will continue to firmly respond to lawbreakers, arrest them, and bring them to justice," he said.

At least 40 haredim detained
Rabbi Yitzhak Goldknopf of the Council for the Sanctity of the Shabbat told Ynet Saturday evening that "we got the most out of the mission we took upon ourselves, as tens of thousands of residents went out to protest the trampling of the Shabbat's sanctity."

The rabbi stressed that leaders of the struggle are not assuming responsibility for Saturday's riots, but rather, only for a mass rally Friday, noting that the Shabbat violence "is not our way." He added that the Council will continue to address the issue, but said community leaders will decide whether to continue the ferocious protests next Saturday.


During the evening, police officers arrested at least 40 haredi protestors across Jerusalem. Most detainees were nabbed at the entrance to the ultra-Orthodox Mea Shearim neighborhood in the capital. Hundreds of rioters hurled stones, cans, glass battles and fruit at police while chanting "Shabbes." Later in the evening, protestors burned garbage dumpsters in the city.

Earlier in the day, roughly 1,000 secular residents also hit the streets, to protest what they referred to as "ultra-Orthodox bullying" in the capital. 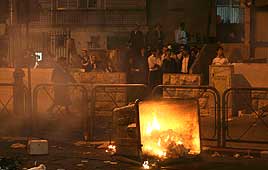 Thousands of haredi protesters converged on the streets of Jerusalem over the weekend as the controversy over the opening of a Jerusalem parking lot on Shabbat continued.

The demonstrations, which included a massive but largely peaceful Friday night prayer vigil attended by tens of thousands of participants, came despite a court-approved agreement to open a private parking lot opposite the Old City's Jaffa Gate instead of the municipal garage.

The violent protests, though on a lower scale than the rioting earlier this month, started Saturday afternoon and went on into the evening, after the municipality opened the Carta parking garage, instead of the municipal lot at Kikar Safra, about two city blocks away.

A 20-year-old was seriously wounded Saturday night after being hit in the head by a stone, while five police officers were lightly hurt in the violence, police and rescue officials said. A young haredi demonstrator was lightly injured when he fell from a fence he had climbed.

Forty protesters were arrested throughout the day for disturbing the peace; in some cases police dispersed the rioters with water cannons.

During the afternoon, 10 haredi protesters who tried to forcibly block cars from entering the parking lot were dispersed by police. Hundreds of others prayed near the lot.

On Friday evening on Herzl Boulevard in Jerusalem, a group of some 100 demonstrators attempted to block the road using metal rods they had taken from a nearby construction site.

The Jerusalem Municipality said that the opening of the lot solved the parking problem in the city on Shabbat.

"The mayor is obligated to maintain the public's safety and this concern is what guides him," the mayor's office said. "The police must now be concerned with public order."

Meanwhile, about 1,000 secular protesters gathered outside city hall on Saturday afternoon to voice support for the opening of the parking lot.

"Today we want to convey the message that Jerusalem is a pluralistic place with room for all people," said Meirav Cohen, of the young Jerusalemites Wake Up Jerusalem party. "Today is proof that bullying and aggression are not the way to reach achievements in Jerusalem."

Police hope that the protests will ebb next weekend.

At least 40 arrested, 1 seriously hurt, Jerusalem shaken.
Failed messiah was established and run in 2004 by Mr. Shmarya (Scott)Rosenberg. The site was acquired by Diversified Holdings, Feb 2016.