Haredi Rabbi: It's Kosher To Cheat On Your Taxes 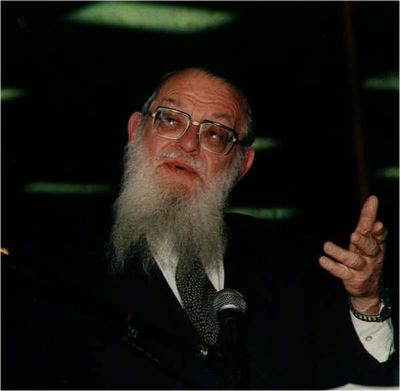 The halachic adviser to Ohel Children’s Home and Family Services, which receives millions of dollars in state and federal money, told a Bergenfield, N.J., synagogue audience in 2007 that tax evasion is permissible under Jewish law as long as one doesn’t get caught, according to people in attendance.

The adviser, Rabbi Dovid Cohen, a Brooklyn-based, highly respected halachic expert who also serves as one of three rabbinic guides to Nefesh International, a network of Orthodox mental health professionals, is said to have made the comments about tax evasion during a Shabbat talk at Congregation Beth Abraham in Bergenfield in February 2007.

Now, more than two years later, the repercussions may be taking a toll on Rabbi Cohen and his reputation.

Several in attendance at the talk said that Rabbi Cohen gave an extended response to a question from the audience, asserting that tax evasion is permissible under Jewish law, as long as there is no realistic possibility of being caught, thus causing a chillul hashem, or desecration of God’s name.

The justification was based on the rabbi’s apparent belief that the reason the rabbis of the Talmud forbade stealing from a non-Jew was only out of fear of anti-Semitism.

Virtually every halachic source agrees that tax evasion, as well as theft from non-Jews, is categorically forbidden.

Rabbi Cohen allegedly told his audience that he was making his controversial remarks on Shabbat — he is also said to have asserted that, like the biblical Esau, non-Jews still hate Jews — knowing he was not being recorded, and that if subsequently questioned about his statement, he would deny it.

The rabbi told The Jewish Week on Monday that the statements attributed to him were "totally misunderstood" and that he "repudiated" them.

Based on letters obtained by The Jewish Week, it appears that at least seven people in attendance at the lecture wrote to or called the Rabbinical Council of America, the largest group of Orthodox rabbis, where Rabbi Cohen, though not a member of the RCA, served on its prestigious Va’ad HaPoskim, a group of halachic authorities. Some of the letter writers sought to have Rabbi Cohen removed from the panel; others simply attested to their having heard the rabbi make the remarks, which he denied to the RCA.

The RCA appointed a committee to look into the matter, and concluded that, based on Rabbi Cohen’s assurance that he opposes tax evasion and affirms treating non-Jews with full respect, the matter was closed.

But last week, without fanfare or notice, the RCA disbanded the Va’ad HaPoskim.

Some speculate that it may have come about in light of recent reports in the Jewish press regarding Ohel, with which Rabbi Cohen is affiliated. Others note that the RCA passed a resolution at its annual convention last month calling on congregations not to give honors to those who engage in unethical conduct.

"So how would it look if one of their halachic authorities is alleged to have approved of cheating on your taxes?" one source noted.

In response to a query from The Jewish Week, RCA Executive Director Rabbi Basil Herring explained that the Va’ad HaPoskim move was taken "to avoid confusion." He said that while individual members of that group will be consulted on halachic matters, as in the past, the RCA’s halachic decisions will continue to be made by its Va’ad Halacha, made up of RCA member rabbis.

But according to an RCA official, "the catalyst for the move was the Rabbi Cohen issue."

The official, like most others contacted for this report, asked not to be named out of concern about repercussions.

Asked in an e-mail whether it was appropriate for Rabbi Cohen to continue to serve as halachic adviser for the group, an Ohel spokesman did not respond.

Rabbi Cohen, an American-born graduate of Yeshiva Chaim Berlin, with a pulpit on Coney Island Avenue in Brooklyn, has a longstanding reputation as one of the most respected and practical-minded authorities in the charedi community.

"He has taken courageous positions" on matters of domestic and sexual abuse, according to Rabbi Tzvi Hersh Weinreb, the outgoing executive director of the Orthodox Union. Though some halachic experts are reticent, as is Ohel itself, Rabbi Cohen has encouraged victims in some cases to go to civil authorities, including the police.

Rabbi Abraham Twerski, a psychiatrist and fellow halachic adviser to Nefesh International, said Rabbi Cohen is one of the most "highly respected" rabbis and "one of the most flexible halachic experts" who is unafraid to take lenient positions.

Both rabbis expressed surprise at the controversial statements about tax evasion and non-Jews attributed to Rabbi Cohen.

But another leading rabbi, who described himself as a longtime friend and admirer in many ways of Rabbi Cohen, said that though he had not heard of the tax evasion statement before, he found it "consistent" with the rabbi’s views on non-Jews.

"The irony is he’s a big liberal in the haredi world," the rabbi said.

Others recalled that Rabbi Cohen is no stranger to controversy, and that at a Nefesh International conference in 2000, he suggested that women in abusive marriages stay in the marriage for the sake of their children. After much heated discussion, he apologized the next morning.

Haredi Rabbi: It's Kosher To Cheat On Your Taxes
Rabbi Dovid Cohen is Ohel's halakhic advisor and served on the RCA's Vaad Haposkim. The RCA recently disbanded the Vaad HaPoskim to dump Cohen.
Failed messiah was established and run in 2004 by Mr. Shmarya (Scott)Rosenberg. The site was acquired by Diversified Holdings, Feb 2016.