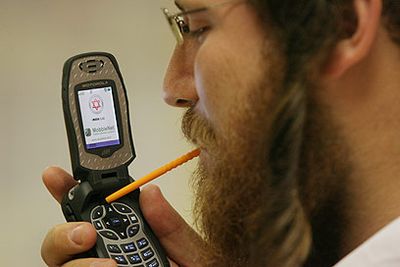 Haredi volunteers to operate mobiles with teeth
Special halachic ruling permits emergency service volunteers to reply to calls on their mobile phone during weekends by operating the device with their teeth
Dr. Itay Gal, Ynet

The issue of working on Shabbat presents a difficult dilemma for the ultra-orthodox workers and volunteers of the Magen David Adom emergency services. A recently-issued halachic ruling now permits on-call volunteers to activate their mobile phones on weekends, provided that they do so using their teeth.

MDA has lately began replacing its workers' old beepers with modern MIRS mobile phones equipped with GPS technology, which enables the dispatch center to locate the volunteers closest to the scene of an accident, thus shortening the emergency teams' response time.

But the switch to the new technology has created a problem for the haredi volunteers, who were concerned that the use of the MIRS device on weekends will amount to Shabbat desecration. Some ultra-Orthodox leaders have even called on the volunteers to keep their old beepers.

In an attempt to resolve this dilemma, MDA approached the head of the Scientific-Technological Halacha Institute, Rabbi Levy Yitzhak Halperin. Halperin permitted the use of the new mobile phones, but stipulated a series of conditions for this: The devices will remain open at all times during weekends and placed in a specially-designed case which will not enable them to shut down accidentally.

On Shabbat and holidays, on-call volunteers will respond to calls by using a small metal pin, which they will place between their teeth and use to press the buttons and confirm their arrival.

"Magen David Adom is committed to adopting the GPS technology while making sure not to disrupt the lifestyle and customs of the volunteers," said MDA Director Genera Eli Bin.

This is one of the most foolish halakhic rulings I've seen:

1. Using this metal mouth pointer will slow down response times, not by vast amounts, to be sure, but it will still slow down response – and that is forbidden according to Jewish law.
2. Mobile phones operate using batteries. Some major rabbis – like Rabbi Moshe Feinstein, for example – hold that batteries are not electricity in the strict legal sense. That makes the use of the metal mouth pointer even more foolish.
3. Lastly, there is the issue of how long the battery will operate. Can it operate for two full days and do so with enough strength to send and receive a clear signal? Does that allow for talk time on the way to and at accident scenes? If not – or if there is even a slight doubt – the ability to turn off and turn on the phone as an EMT goes off and on call, or the ability to plug in the phone to keep it charged, should be paramount.
4. There is no mitzva in using older, less effective technology in order to follow Shabbat halakha. In fact, the opposite is true: It is a mitzva to break Shabbat by using newer, more efficient technology. Using older, less effective technology is actually a sin.
Rabbi Halperin's halakhic ruling is what you get when ideology rather than actual halakha is paramount. And choosing ideology over halakha is the essence of what is wrong with haredi Judaism.

Posted at 11:51 AM in Haredim, Israel, Med-Ethics, Public Health | Permalink