« Kabbalah Gone Bad | Main | ALLEGED HAREDI PEDOPHILE: The Kids Came On To Me »

Riots will be staged all over the country, not just in Jerusalem, if parking lot opens this Shabbat, haredim say. 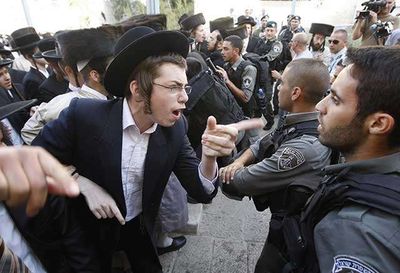 Seeking to defuse an explosive haredi-secular conflict, Jerusalem Mayor Nir Barkat announced Tuesday that the municipality had asked a court to open a parking lot opposite the Jaffa Gate on Saturdays.

But the mayor added that if the Jerusalem District Court did not agree to allow the opening of the Carta parking lot - which is currently in receivership - by this weekend, he would reopen the municipal lot at Safra Square this Shabbat.

The Eda Haredit announced that if the municipal lot was opened again on Shabbat, it would "set the whole country, and not just Jerusalem, on fire."

"The Jerusalem municipality has declared a holy war against Shabbat," said posters hung up in Mea She'arim.

They called for a mass prayer rally on Saturday, and protests at haredi population centers outside Jerusalem.

The municipality has turned to the court in an effort to avert a showdown with extremist haredim who have vowed to renew violent protests if the city hall parking lot is reopened on Shabbat.

Any lot that is opened would be operated by non-Jews, in accordance with Halacha.

"We have done everything to ensure that the opening of the parking lot would be done without desecrating the Sabbath, in a manner which takes into account the feelings of the haredi public, and also meets a life-saving need," Barkat said at a city hall press conference.

He noted that similar agreements have been worked out elsewhere in the capital in previous years at the urging of the police.

"Consideration and negotiation do not come in place of a decision where it is needed," Barkat said. "This is a trying time for those who seek coexistence in the city, for those who believe that in Jerusalem you have to live and let live."

The move to open the lot opposite the Old City walls, which can accommodate 800 vehicles and 35 buses, is laced with irony since Barkat's mainstream haredi coalition partners had rejected an earlier municipal proposal supported by police to open that lot, and then agreed to the opening of the municipal lot that spurred the violent protests by the radical anti-Zionist Eda Haredit group.

It subsequently emerged that the Eda Haredit vehemently opposed opening the municipal garage on Saturdays, and was less opposed to the opening of a non-city owned property.

It was not immediately clear Tuesday whether the group would accept the opening of the alternate site.

An additional option to open a privately-owned parking lot under the adjacent Mamilla Mall was nixed after its owner turned down the mayor's request to use it on Saturdays.

The decision by businessman Alfred Akirov, who also owns the nearby David Citadel Hotel and the newly opened Mamilla Hotel, was seen as motivated by a desire not to lose his many haredi customers from abroad who patronize the properties.

"We support the mayor's decision, and we will make sure that this move is implemented in practice despite any opposition from extremist haredim," said Meirav Cohen, a spokeswoman of the Wake up Jerusalem-Yerushalmim Party.

"This is a debate over the very nature of Jerusalem," she said.

The mayor's much-anticipated decision came 10 days after he acceded to
a request by Jerusalem police chief Cmdr. Aharon Franco to close the municipal parking lot for two Saturdays to allow time for an agreement to be reached that would forestall further violence.

The city lot was opened in agreement with Barkat's coalition partners to accommodate visitors to the capital over the weekends who were illegally parking on main thoroughfares near the Old City.

About 100 motorists parked their cars in the city lot on the one Saturday it operated.

Analysts saw the dispute as an opportunity by the small Eda Haredit group to attack on the secular mayor, a self-made hi-tech millionaire. 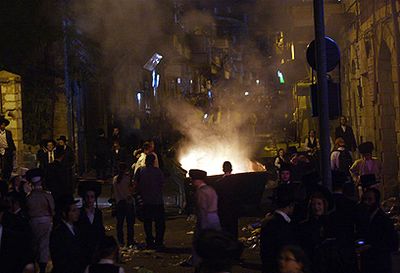 Here is the Ha'aretz report:

By Nir Hasson and Yair Ettinger

The Jerusalem municipality's parking lot will be open to cars this Shabbat if a nearby lot does not receive court permission to open, Mayor Nir Barkat announced Tuesday. The decision is expected to lead to renewed ultra-Orthodox rioting.

The Eda Haredit, an extremist ultra-Orthodox group that led riots two weeks ago, immediately responded to Barkat's announcement by calling for a mass prayer rally on the capital's Bar-Ilan Street on Friday night. It also called for solidarity demonstrations in Haredi towns and neighborhoods outside Jerusalem.

Secular political parties and organizations are also planning demonstrations this Shabbat, in support of the lot's opening.

"This is a test for all those who seek coexistence in this city, for people who understand that in Jerusalem, we must live and let live," Barkat said.

The municipal lot, located in Safra Square near the Old City, was opened on Shabbat for the first time earlier this month. But the riots that ensued prompted Barkat to close it for the next two weekends while he tried to negotiate a compromise.

His first proposal was to open a nearby private lot, owned by businessman Alfred Akirov, instead of the municipal one. But Akirov backed out, apparently concerned that ultra-Orthodox rioters would damage his business.

Barkat then looked into opening another nearby lot, this one owned by the municipal corporation Karta. However, since Karta is in the process of being liquidated by a court-appointed receiver, that requires the court's permission.

The receiver, attorney Yitzhak Molcho, said he would not object to opening the lot as long as the city promises to compensate Karta if the lot is vandalized. The city asked yesterday for court approval to open the lot.

Barkat said he hoped the court would do so before this weekend, but if not, he will order the Safra lot opened.

Barkat said the Safra lot's opening would not violate religious prohibitions against Jews working or earning money on Shabbat, since it will be manned by a non-Jew and cars will not be charged for parking.

However, these provisions failed to satisfy the rioters last time, so municipal officials are bracing for more riots this Shabbat. The ultra-Orthodox charge that the lot's opening violates the religious status quo in Jerusalem.

Despite the planned Eda Haredit protest, other ultra-Orthodox groups have thus far refrained from provocative statements, saying they prefer to keep negotiating with the municipality.

Rabbi Yitzhak Goldknopf of the Rabbis' Committee for Shabbat, which represents the mainstream Haredi public, said his organization has not yet decided how to respond to the lot's opening. However, he said, he was upset by Barkat's decision, "which was made without dialoguing with us."

Nevertheless, several Haredi groups - including the Eda Haredit - said this issue would not affect their decision to refrain from protests against tomorrow's Gay Pride parade in Jerusalem.

The city decided to open a lot near the Old City after police said the volume of traffic in this area on Shabbat, coupled with the lack of parking spaces, was creating serious traffic jams.

Posted at 03:53 AM in Crime, Litigation, etc., Haredim, Israel | Permalink

Riots will be staged all over the country, not just in Jerusalem, if parking lot opens this Shabbat, haredim say.