The heated clashes in the Jerusalem neighborhood of Mea Shearim only abated towards 10:00 pm on Saturday after an afternoon of violent rioting. Police were eventually successful in pushing back the thousands of ultra-Orthodox men who tried to storm the municipality-owned parking lot in Safra Square in protest of the mayor's decision to open the lot on Shabbat. 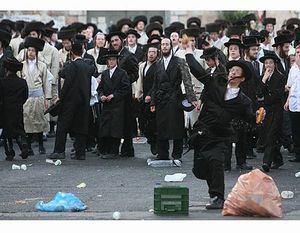 Police deployed in large numbers ahead of the demonstration, which had been extensively publicized in the ultra-Orthodox neighborhoods under a banner of 'The Battle for Jerusalem.'

The situation quickly deteriorated, with protestors hurling rocks, bottles, food, dirty diapers and a variety of other objects at the security forces. Policemen were spat on and called Nazis. Five officers sustained light wounds and were treated at the scene by paramedics. It eventually took reinforcement officers mounted on horses to push the crowd back towards Mea Shearim, where the rioting continued.

In all seven protestors were taken into custody, including a 16-year old haredi youth who was caught pelting a squad car with stones. The protestors also set garbage bins on fire, and police are still battling the flames in some locations.

"The haredim submitted a request to hold the protest, which we authorized. They promised that they would protest by reading from the Torah, but we readied men in case things would develop differently. When the protestors arrived we could see it wasn't going to be a quiet demonstration," Commander Bruno Stein, chief of Jerusalem's Zion precinct said.

Stein said that police initially tried to avoid making arrests. "It was Shabbat and we understand the sensitivity. But if the protests happen again on Shabbat, we won't be as forgiving," he added.

Police chief: Lot should be opened 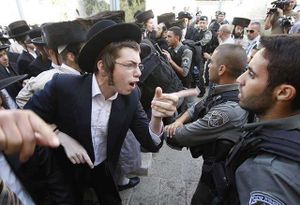 The Jerusalem municipality recently announced it would keep the parking lot open on Shabbat in an attempt to alleviate the debilitating parking shortage on Fridays and Saturdays. The lot would be under non-Jewish management, and would thereby not break any Halachic laws. But what was thought to be a minor shift in traffic policy was immediately seized upon by the city's ultra-Orthodox community, which issued an urgent call to arms.

Jerusalem District Police Chief Aharon Franco said on Saturday night however that the parking lots must be opened on Shabbat. "Our recommendation was to open (the parking lot), and I hope that through dialogue this will be made possible," he said.

Franco summed up the difficult events, calling the riots an irregular occurrence. "For nearly two years we've had quiet here while maintaining a day-to-day level of dialogue with the (ultra-Orthodox) community." 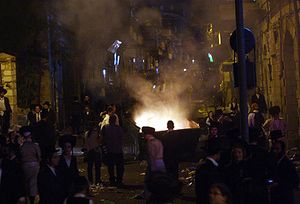 Hebrew University. "We will not give in to the bullying strategies of the different sectors, nor will we capitulate to threats," said Meirav Cohen of the 'Wake up Jerusalem' organization.

Jerusalem Mayor Nir Barkat also issued a statement following the riots. "We regret that the protest that turned violent. The lot has been opened in order to solve a parking shortage in the city, and this was done without desecrating the Sabbath, as well as with the consultation of a variety of populations including the haredim."

Efrat Weiss contributed to this report