Queens Pita given ultimatum by Vaad. 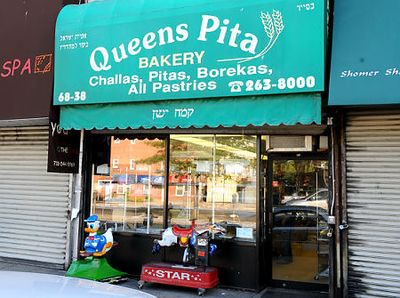 PUBLIC ADVISORY - SUNDAY, JUNE 14, 2009 On Friday, June 12, 2009, the Vaad Harabonim of Queens ordered the retail establishment known as Queens Pita Bakery and/or Queens Kosher Pita, located at 68-38 Main Street, Flushing, NY 11367, to terminate the employment and any ownership interest of Isaac Ebstein, who earlier in the week pled guilty to felony and misdemeanor sex crime-related charges in the State Supreme Court, Queens County. In its hand delivered letter to Queens Pita, signed by Executive Vice-President, Rabbi Chaim Schwartz, the Vaad stated that "by the close of business on June 12, Ebstein shall neither work, nor be present in the store in any capacity whatsoever." Additionally, the letter ordered Queens Pita "to remove Ebstein as an owner, shareholder, officer, director, and/or partner, and provide written evidence." The Vaad was contacted by the victims family, and was closely monitoring the situation. Two senior members of the Vaad Harabonim of Queens were present in court for the guilty plea. The Kosher Supervision Agreement between the Vaad and Queens Pita provides that the Vaad has the discretion to terminate the Agreement upon the conviction of any crime of moral terpitude committed by a store officer or director. This clause was cited by the Vaad in its letter. The decision to order Ebstein's withdrawal as an owner and employee was jointly made by the Vaad and local Kew Gardens Hills congregational rabbis in a special meeting, and upon consultation with legal counsel. Vaad officials have also conferred with Queens Pita owner and proprietor Norman Kohn. Queens Pita has complied with the Vaad directive to immediately terminate Ebstein's employment. The report from the NY Daily News Saturday, June 13, 2009 that Ebstein would be returning to work, based on a statement from an unidentified female employee, is erroneous. Queens Pita continues to be under the supervision of the Vaad.