« Survivors’ Hopes Dashed As NY Assembly Adjourns Without Vote On Sex Abuse Bill | Main | "He Died, So We Come Here To Pray To Him." »

Agriprocessors Sale Will Leave Little To Nothing For Unsecured Creditors, Workers 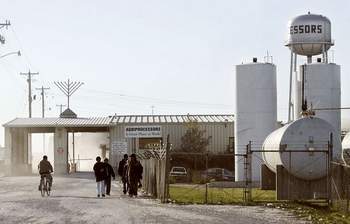 The Rev. Richard Gaul performs a blessing of the Agriprocessors plant and the crowd during a march to the Postville plant’s front gate May 12, the anniversary of the immigration raid. Creditors may lose money on the sale but could pick up business if the city’s biggest employer is restored.

Hundreds of Agriprocessors’ creditors could walk away empty-handed if a deal proposed by a bankruptcy trustee to sell the company for $8.5 million is approved.

The sale price is so much less than the company owes its creditors that observers say there will likely be nothing for more than 400 unsecured creditors. Creditors with a security interest in plant equipment will have to negotiate the best deal they can with buyer SHF Industries Inc.

Craig Bodley of Bodley Equipment & Repair in Postville, a three-person metal fabrication and repair shop, is owed several thousand dollars by the town’s biggest private business. It has no security interest in the plant’s real estate, buildings or equipment to use as leverage in trying to collect the debt.

“I was kind of hoping they’d get a little better price for it than that and they’d be able to cover some of the debts,” Bodley said. “It sounds like the secured creditors will get it all. I don’t even know if it will be enough to take care of all of them.”

More than 400 unsecured creditors are owed more than $22 million in the case, according to Bradley Kruse, the Des Moines attorney representing the unsecured creditors committee in the Agriprocessors bankruptcy. He said creditors don’t have all the information they need to evaluate the sale terms, but it appears they would get nothing.

Despite that, Kruse said it’s possible that unsecured creditors will not object to the sale. That’s because an auction of the company’s assets in March lowered creditors’ expectations of what the troubled kosher meat processor is worth to potential buyers and because many creditors might benefit from a successful buyout of the company.

Going into the March auction, Soglowek Nahariya Ltd. of Israel was prepared to offer $40 million for Agriprocessors. Soglowek was positioned as the “stalking horse bidder” against which other bidders would compete. But Soglowek backed out of the process before the auction began, telling a bankruptcy trustee it couldn’t complete an asset purchase agreement in time because it couldn’t fully investigate the company.

Kruse said the bankruptcy court is expected to hold another auction with SHL as the lead bidder. The result could yield a better price for the company than SHL offers — or no bidders at all.

Creditors must weigh the disappointment of receiving nothing for the services or goods they provided Agriprocessors against the possibility that the plant, currently operating at low volume, could be closed permanently.

“They are hoping for new owners that will keep the plant in Postville and be a valuable ongoing customer that the past creditors can trade with in the future,” Kruse said.

SHL hasn’t contacted the city of Postville, according to City Clerk Darcy Radloff. The city is struggling to meet payments on a government loan it took out to build a wastewater treatment plant to serve Agriprocessors.

The city is owed about $24,000 in pre-bankruptcy debt by Agriprocessors. Wes Huisinga, the city’s attorney in the case, said it’s possible the city could work with the company to seek a reduction in its loan payments to the government. He said restoring the city’s biggest private employer would also help the city financially by filling up many vacant rental properties, the owners of which cannot pay their utility bills.

The thing most notable about this article isn't that unsecured creditors will get nothing. That was clear the minute the sale was announced. The most notable thing It is that Dave DeWitte, whose reports often are nothing more than rewritten press releases from Agriprocessors trustee, did not mention the hundreds of former employees owed hundreds of thousands of dollars by Agriprocessors and the impact this deal will have on these very poor people, many of whom were also cheated by Jacobson Staffing and thrown into the cold by Alliant Energy.
Many of these workers will not get their jobs back and none of them will see a cent of the money owed them.
At the same time, neither Postville or the State of Iowa have taken steps to ensure the new owners don't do what Agriprocessors did, both under Rubashkin rule and under the rule of the court appointed trustee – play bait and switch with employees, hire them at a competitive rate of pay and then drop their rate of pay dramatically after employees have moved into town and started work.
Most of these workers are too poor to leave when this happens and are forced to continue working for far less money than they were promised.
This is a problem with Iowa law that, quite frankly, no one in government cares to fix.
The way to get around it is to compel the new Agriprocessors to both publish their rates of pay and publish an employee handbook that contains pay grades and exact details of wages, promotions, and bonuses and file that handbook with the state and city.
That gives state officials a way to prosecute the company if it plays bait-and-switch with workers.
Another better way to deal with this problem is to have collective bargaining – in other words, a union. This also protects workers and does so in a stronger, safer way that relying on the state.
As far as I know, neither Postville or the State of Iowa have taken the first option or worked to achieve the second.
My guess is things will be a lot like they were under the Rubashkins.
They'll be plenty of blame to go around, the vast majority of which will rightly come to rest on city officials and state economic leaders, not one of whom really cares if poor workers go hungry.
If Upton Sinclair was alive today, Postville, Iowa would be his Jungle.

Agriprocessors Sale Will Leave Little To Nothing For Unsecured Creditors, Workers
Unsecured creditors owed $22 million, unlikely to recover anything.
Failed messiah was established and run in 2004 by Mr. Shmarya (Scott)Rosenberg. The site was acquired by Diversified Holdings, Feb 2016.