These Kosher Inspectors Stay Out Of The Kitchen

Does Tav HaYosher really do anything?

These Inspectors Stay Out Of The Kitchen
Steve Lipman, NY Jewish Week

A young rabbi walked into one of Michael Gershkovich’s kosher restaurants on the Upper West Side a few weeks ago, asked for the owner, then began a sales pitch.

The rabbi was selling not a product, but an idea — a new form of free kosher supervision that certifies not ritual standards, but compliance with the Torah’s brand of ethics.
Gershkovich, a Culinary Institute of America-trained chef who owns Mike’s Bistro and Mike’s Pizzeria & Italian Restaurant, was convinced.

His restaurants were among the first seven that were announced this week as participants in the Tav HaYosher (ethical seal) program established by Uri L’Tzedek, the Orthodox Social Justice Movement. Restaurants that receive the Tav HaYosher certificate, which will be conspicuously posted in the establishments like standard kashrut certificates, have been judged by Uri L’Tzedek’s “compliance monitors” to meet state guidelines of “fair pay, fair time and safe work environment” for employees, the organization’s representatives were expected to state Tuesday at a press conference where Tav HaYosher was unveiled. At press time Uri L’Tzedek (Awaken to Justice) had not listed a full roster of the participating restaurants.

Tav HaYosher “isn’t a heksher per se,” isn’t an alternative to standard certifications of a product’s kashrut, but is a means to encourage restaurants and consumers to be more sensitive to trans-kashrut ethical concerns, says Rabbi Ari Weiss, Uri L’Tzedek’s lead professional. “We see this as complimentary to the system of kashrut. People will make their [dining] choices based on places they know treat their workers correctly.”

“Our campaign is a positive one — we’re looking to offer the carrot, not the stick,” encourage patronizing of participating restaurants, not boycotting others, said Ari Hart, Uri L’Tzedek co-director.

The announcement marked the first anniversary of the raid on the Agriprocessors Inc. kosher slaughterhouse and meat packing plant in Postville, Iowa, where federal officers made nearly 400 arrests, most of them illegal immigrants from Guatemala and Mexico, on charges of use of stolen social security numbers and similar offenses.

The Agriprocessors management was subsequently charged with violating child labor; an animal rights group claimed that cows there were inhumanely slaughtered; reports surfaced of abusive practices, including 17-hour workdays.

Reports of abusive or illegal behavior at Agriprocessors over the last few years have opened the kosher food industry and the wider Orthodox community to criticism from outsiders, including animals rights advocates and progressive Jewish groups like Uri L’Tzedek.

Also growing out of the ongoing Agriprocessors controversy, the Conservative movement is developing a “Magen Tzedek” seal of certification for kosher food producers, and the Rabbinical Council of America, a major Modern Orthodox organization, recently announced that it is establishing a task force to develop business and ethical guidelines for the kosher food industry.

While Uri L’Tzedek and the Magen Tzedek initiative have different foci and will not be in competition, “We support their work,” said Rabbi Morris Allen, director of the Hekhsher Tzedek commission, which created Magen Tzedek.

Uri L’Tzedek, inspired by Jewish concerns for the downtrodden, is concentrating on compliance with state labor laws.

“Recent studies have revealed widespread abuse and exploitation of workers in the New York [City] restaurant industry,” according to the Uri L’Tzedek Web site (uriltzedek.webnode.com) “Thousands of workers are paid below minimum wage. Even more are denied their legal rights to overtime pay and time off. Workers are often subject to unsafe and abusive working conditions.

“Given recent events in the kashrut industry,” the Web site states, “it is imperative that we  ... implement a system that will prevent abuse and exploitation. We must ensure these abuses are not taking place in kosher restaurants.”
Uri L’Tzedek approached the owners of restaurants that it judged to be already in compliance with, or sympathetic to, its legal and ethical requirements for certification, said Rabbi Weiss. Representatives of the organization interviewed the owners and employees, inspected each restaurant, and have had access to payroll records, he says, adding that they are also setting up an anonymous tip line for reporting  ethical compliance issues.

The seven restaurants — a mix of budget and upscale, meat and dairy establishments — receiving the original Tav HaYosher (tavhayosher.blogspot.com) certification “are in compliance now,” he says, declining to specify if any changes were made by the participating restaurants.

Uri L’Tzedek representatives, including about a dozen college students who will undergo training this summer as part of an internship-fellowship program, will serve as compliance monitors, inspecting each restaurant about once a month at times that are not announced to management in advance.

The Tav HaYosher project, Rabbi Weiss said, is similar to the Tav Chavrati program, begun four years ago in Israel, which offers certification to some 350 restaurants.

Tav Chavrati “has made a very positive impression on young people,” most from secular backgrounds, said Steven Bayme, director of the American Jewish Committee’s Department of Contemporary Jewish Life. The ethical certification has broken stereotypes among many secular Israelis, who are often hostile to Orthodox Judaism, and makes a statement “that being an Orthodox Jew is not merely a matter of ritual, of politics [but] is about doing the right thing,” Bayme said.

Rabbi Weiss and other Uri L’Tzedek representatives have given speeches about their project over the last year at several area synagogues, schools and other Jewish institutions.

Most restaurants owners approached to participate in Tav HaYosher welcomed the idea, though some did not immediately agree to participate, he said. “Some said they are still considering it. Some restaurants are in the process of raising the amount they pay to some of their workers. We see this as a long-term project,” with an increase in the number of participating restaurants.

Michael Gershkovich, who said he has already posted the Tav HaYosher certificates in his restaurants, said he has encountered mixed reactions from customers. Some congratulate him for conducting his business in compliance with Jewish law and state legislation, he says. “Some people find it [the certificate] offensive. They feel it undermines the ‘usual kashrut’” certification. “It’s not a cut-and-dry situation.”

Supportive of Uri L’Tzedek’s ethical emphasis, he says he agreed to be part of the Tav HaYosher project for practical reasons. “It’s all about business. It can’t hurt business.”

He says his restaurants were already in compliance with state laws; he didn’t have to change any of his business practices. “They’re giving you a commendation,” Gershkovich says, “for following the law.” 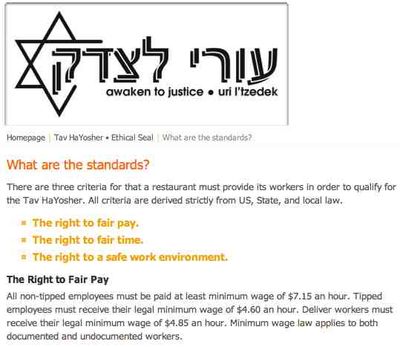 Here is the living wage calculation for Manhattan. Note Tav HaYosher is giving its 'kosher'

seal on an hourly wage that is far less than a living wage and is also far less that the average wage paid restaurant workers. 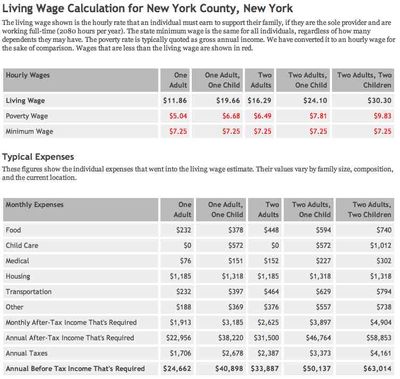 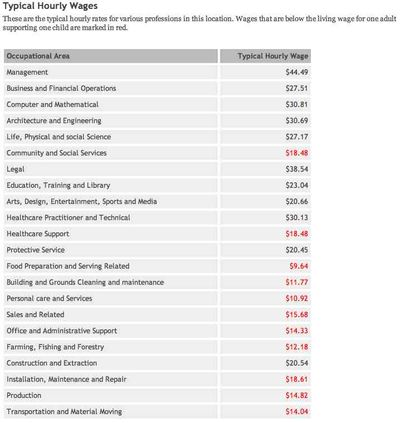 Uri L'Tzedek is the same group that called for an Agriprocessors boycott and then ended the boycott, claiming it had achieved its goals. Of course, nothing had been achieved at all, except an inordinate amount of publicity for Uri L'Tzedek.

One of the issues Magen Tzedek (formerly Hechsher Tzedek) has grappled with is determining living wage. It has dealt with this and related issues carefully and in great detail.

The same clearly can not be said for Uri L'Tzedek and Tav HaYosher.

These Kosher Inspectors Stay Out Of The Kitchen
Does Tav HaYosher really do anything?
Failed messiah was established and run in 2004 by Mr. Shmarya (Scott)Rosenberg. The site was acquired by Diversified Holdings, Feb 2016.