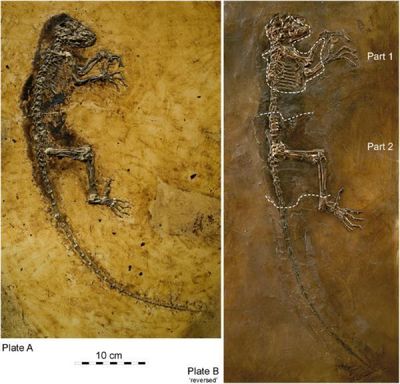 ScienceDaily (May 19, 2009) — Scientists have found a 47-million-year-old human ancestor. Discovered in Messel Pit, Germany, the fossil, described as Darwinius masillae, is 20 times older than most fossils that explain human evolution.

Known as “Ida,” the fossil is a transitional species – it shows characteristics from the very primitive non-human evolutionary line (prosimians, such as lemurs), but is more related to the human evolutionary line (anthropoids, such as monkeys, apes and humans). At 95% complete, the fossil provides the most complete understanding of the paleobiology of any Eocene primate so far discovered.

The scientists’ findings are published in PLoS One, the open-access, peer-reviewed journal from the Public Library of Science.

For the past two years, an international team of scientists, led by world-renowned Norwegian fossil scientist Dr Jørn Hurum, University of Oslo Natural History Museum, has secretly conducted a detailed forensic analysis of the extraordinary fossil, studying the data to decode humankind’s ancient origins. At 95% complete, Ida is set to revolutionize our understanding of primate evolution.

"This is the first link to all humans ... truly a fossil that links world heritage," said Dr. Hurum.

"It’s really a kind of Rosetta Stone," commented study co-author Professor Philip Gingerich, of the Museum of Paleontology at the University of Michigan.

The fossil was apparently discovered in 1983 by private collectors who split and eventually sold two parts of the skeleton on separate plates: the lesser part was restored and, in the process, partly fabricated to make it look more complete. This part was eventually purchased for a private museum in Wyoming, and then described by one of the authors (Jens L. Franzen) who recognized the fabrication. The more complete part has just come to light, and it now belongs to the Natural History Museum of the University of Oslo (Norway). The PLoS ONE paper describes the study that resulted from finally having access to the complete fossil specimen.

Unlike Lucy and other famous primate fossils found in Africa’s Cradle of Mankind, Ida is a European fossil, preserved in Germany’s Messel Pit, the mile-wide crater and oil-rich shale is a significant site for fossils of the Eocene Epoch. Fossil analysis reveals that the prehistoric primate was a young female. Opposable big toes and nail bearing tips on the fingers and toes confirm the fossil is a primate, and a foot bone called the talus bone links Ida directly to humans.

The fossil also features the complete soft body outline as well as the gut contents: a herbivore, Ida feasted on fruits, seeds and leaves before she died. X-rays reveal both baby and adult teeth, and the lack of a ‘toothcomb’ or a ‘grooming claw’ which is an attribute of lemurs. The scientists estimate Ida’s age when she died to be approximately nine months, and she measured approximately three feet in length.

Ida lived 47 million years ago at a critical period in Earth’s history–the Eocene Epoch, a time when the blueprints for modern mammals were being established. Following the extinction of dinosaurs, the early horses, bats, whales and many other creatures including the first primates thrived on a subtropical planet. The Earth was just beginning to take the shape that we know and recognize today – the Himalayas were being formed and modern flora and fauna evolved. Land mammals, including primates, lived amid vast jungle.

Ida was found to be lacking two of the key anatomical features found in lemurs: a grooming claw on the second digit of the foot, and a fused row of teeth in the middle of her lower jaw known as a toothcomb. She has nails rather than the claw typical of non-anthropoid primates such as lemurs, and her teeth are similar to those of monkeys. Her forward facing eyes are like ours – which would have enabled her fields of vision to overlap, allowing 3D vision and an ability to judge distance.

The fossil’s hands show a humanlike opposable thumb. Like all primates, Ida has five fingers on each hand. Her opposable thumb would have provided a ‘precision grip’. In Ida’s case, this is useful for climbing and gathering fruit; in our case, it allows important human functions such as making tools, and writing. Ida would have also had flexible arms, which would have allowed her to use both hands for any task that cannot be done with one – like grabbing a piece of fruit. Like us, Ida also has quite short arms and legs.

Evidence in the talus bone links Ida to us. The bone has the same shape as in humans today. Only the human talus is obviously bigger. X-rays and CT scanning reveal Ida to be about nine months old when she died, and provide clues to her diet – which included berries and plants. Furthermore the lack of a bacculum (penis bone) means that the fossil was definitely female.

X-rays reveal that a broken wrist may have contributed to Ida’s death – her left wrist was healing from a bad fracture. The scientists believe she was overcome by carbon dioxide gas whilst from drinking from the Messel lake: the still waters of the lake were often covered by a low lying blanket of the gas as a result of the volcanic forces that formed the lake and which were still active. Hampered by her broken wrist, Ida slipped into unconsciousness, was washed into the lake, and sunk to the bottom, where the unique conditions preserved her for 47 million years.

The findings of the two-year study will be revealed exclusively by Atlantic Productions in a documentary film, "The Link," to be screened by History on Monday May 25th, 2009 at 9pm ET/PT and BBC One in the UK Tuesday May 26th, 2009 at 9pm BST. It will also be broadcast on ZDF, NRK and around the world. A book, "The Link," will be published by Little Brown and Company, a division of Hachette Book Group, on Wednesday May 20th. An interactive, content-rich website about Ida has been launched at http://www.revealingthelink.com.

"This little creature is going to show us our connection with all the rest of the mammals," said renowned broadcaster and naturalist Sir David Attenborough. "The link they would have said until now is missing ... it is no longer missing."

Adapted from materials provided by Public Library of Science. 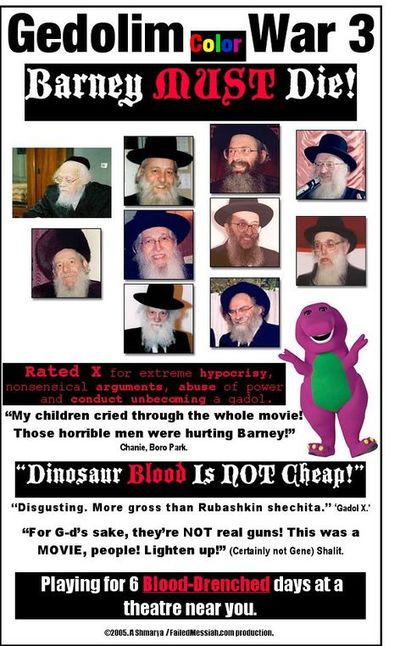 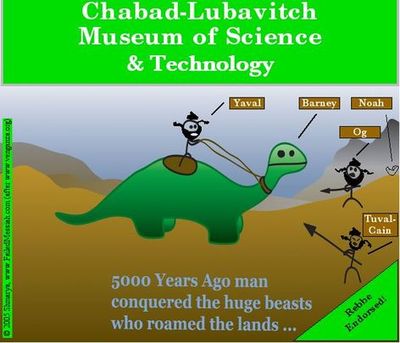 SCIENTISTS FIND "FIRST LINK TO ALL HUMANS"
47 million year old fossil may be missing link.
Failed messiah was established and run in 2004 by Mr. Shmarya (Scott)Rosenberg. The site was acquired by Diversified Holdings, Feb 2016.