But what does Rabbi Aviner really mean?

We unfortunately see a phenomenon of unbridled parental child-beating, and there are also cases of parents or other relatives raping boys or girls. This heinous phenomenon exists in the same percentages amongst the religious as amongst the secular. In fact, it is actually higher amongst the religious and Chareidi [“UltraOrthodox”], but it gets reported only when matters get too far out of hand, or it comes to light by itself, and by then many more cases crop up.

And why don’t people report it? “It constitutes forbidden gossip… It might destroy the lives of the abuser… it’s unsavory to report it… it will bring calamity on the abuser and his family…” Obviously, all this is wrong. This is the sort of report that one can and must make. After all, the child is small, and who will protect him? It’s one thing if abuse happens outside of a family. One can hope that perhaps the family will stop it and protect the child, but if it occurs within the family, the child has no one to save him. Therefore, whoever knows about it has to report it. Obviously, first one has to talk with the parents, or with the teacher if he is the abuser. If they stop and go for treatment, all the better. If not, however, one is required to report to the welfare department or the police. Some among the Chareidim argue that one is forbidden to report abuse in accordance with the Jewish law that one is forbidden to be a “mosser”, i.e., a person who “betrays a Jew to the non-Jewish courts”, which, by analogy, they apply to the courts of the State of Israel. Yet that is wrong as well, because the child’s life is at stake. The author of the book “Nishmat Avraham”, Rabbi Dr. A. Avraham, relates that he asked the illustrious rabbis of our generation, Rabbi Shlomo Zalman Auerbach, Rabbi Eliezer Waldenberg and Rabbi Shalom Elyashiv about this, and all of them said that it is a mitzvah to report the abuse, and the person who does so is no “mosser.” Quite the contrary, the parents or family members or the teacher who commits the abuse, whether physical or sexual, is to be categorized as a “rodef,” an attacker, and one who reports a “rodef” is not to be classed as a “moser." Those same rabbis rule that even if, as a result, the child will be removed from his family and placed into a secular institution or adopted by secular parents, or – in cases abroad – even if he is placed in an institution of non-Jews – this is a matter of life and death. We must certainly strive to have the child not undergo such placement, but even if there is a chance it will happen, as noted, this is a matter of life and death (Nishmat Adam, Vol. 4, page 207).

Therefore, whoever knows, has to report it. Sometimes the counselors in a youth organization notice the child’s tension and distress, and they must report to the next echelon in the organization. Sometimes they can tell that something has happened to the child. He is sad. He doesn’t function. He’s woeful and introverted. These are worrisome signs. Or the opposite, suddenly the child becomes violent and acts this way to other children. Often, the victim, himself, becomes the attacker. In short, such things have to be reported – and right away!

One time I asked people in the know: How can a religious, G-d-fearing person, a person who learns Torah, behave this way? They yelled at me: “Don’t be naïve! Do you think that an abnormal person who learns Torah is going to become normal? No! He must go for treatment!” They’re certainly right. For example, we see that Rambam did not make due with writing many books about faith and halachah, but saw the importance in writing a book called “Shemoneh Perakim” about improving one’s character. It may well be that a normal person who learns Torah will naturally improve his character that way. But if someone is in bad shape, it won’t suffice. He will need special treatment. In our case, he will need psychological treatment in order to take hold of himself. Have pity on the child!

In summary, if you see abuse, you’ve got to save the child and report it, and immediately!

Earlier today, I asked Rabbi Aviner for a clarification of this part of his article:

…This is the sort of report that one can and must make. After all, the child is small, and who will protect him? It’s one thing if abuse happens outside of a family. One can hope that perhaps the family will stop it and protect the child, but if it occurs within the family, the child has no one to save him. Therefore, whoever knows about it has to report it.…

So far, he hasn't answered.
I think, however, it is reasonable to say that, like many rabbis, Rabbi Aviner doesn't get it. Even though he probably means well, at best his language is inexcusably imprecise. And that impreciseness puts children at risk.
Here is the English translation of the Nishmat Avraham Rabbi Aviener quotes, also imprecisely. Close readers of this blog will also note this Nishmat Avraham shows that those who say Rabbi Elyashiv or other major haredi rabbis rule that police should be called when abuse is suspected is a gross oversimplification of their rulings. It also shows, I think, that no internal solution to haredi child sexual abuse exists.
Please click to enlarge. It will be easier to read if you open the image in a new tab. You should be able to do this by right clicking the image: 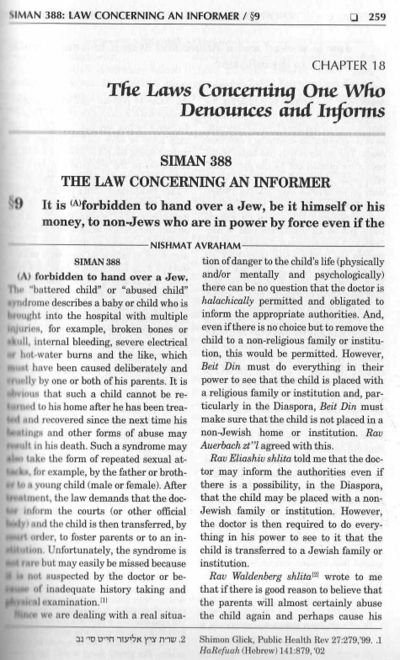 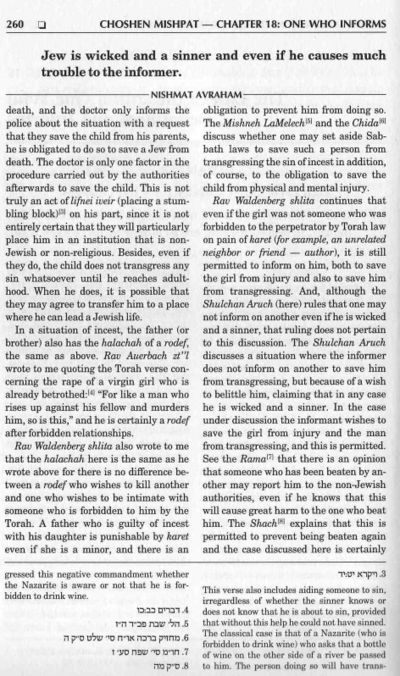 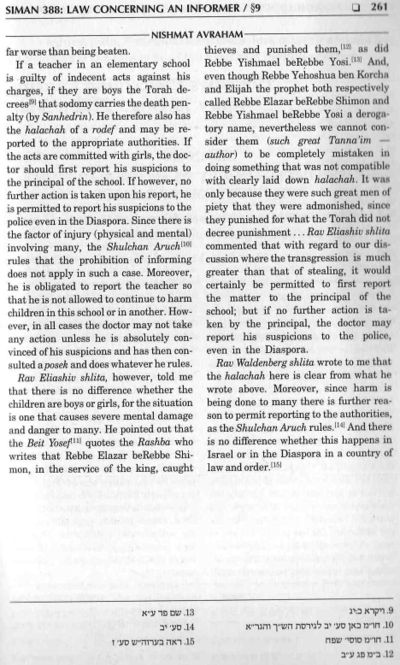 Rabbi Aviner on Child Sex Abuse
But what does Rabbi Aviner really mean?
Failed messiah was established and run in 2004 by Mr. Shmarya (Scott)Rosenberg. The site was acquired by Diversified Holdings, Feb 2016.