The battle over legislation that would remove the statute of limitations on child sexual abuse for one year took to the streets Sunday night, complete with a dose of sophisticated street theater.

The scene was the New York Hilton Hotel, where the haredi umbrella group Agudath Israel was holding its annual dinner. The organization — along with Torah Umesorah, the Orthodox educational network, and the Catholic Church — opposes a bill authored by Assemblywoman Marge Markey that, if passed, could potentially end up costing Orthodox institutions tens of millions of dollars. The bill provides a one-year window during which alleged victims can file civil suits regardless of when the abuse took place.

A small group of supporters of the Markey bill, in standard protest style, picketed the Agudah dinner, displaying signs that read “Agudah Stop Protecting Pedophiles.” But the group went a step further. It handed out forged fliers designed to look exactly like those e-mailed to Agudah members. On one side was a copy of the Agudah’s joint press release with Torah Umesorah opposing the Markey Bill. On the other was a fake statement from Rabbi David Zwiebel, Agudah’s executive vice president for government and public affairs. 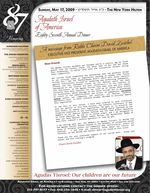 The fake message — in which “Rabbi Zwiebel” claims to have been ordered to work with the Catholic Conference of New York State in this “holy mission” and calls upon Agudah members to decide how the organization should respond to the “epidemic of sexual abuse” —— appeared real enough to at least one Jewish leader who saw it. He called The Jewish Week to tip the paper off about the “statement.”

Among the protesters were Mark Appel, a community activist from the Upper West Side; Rabbi Nuchem Rosenberg, an activist and advocate from Williamsburg who claims he was shot in the head for speaking out about child sexual abuse in his community; Levi Goldenberg, also from Williamsburg and the founder of an organization called The Committee for Safeguarding Orthodox Jewish Children; and Joe DiAngello, a member of the group Survivors for Justice who alleges he was raped in a mikveh when he was 7.

According to Rabbi Rosenberg, the protesters were there “[to let] Jewish people who are supposed to be Torah-observant people know that we are not allowed to have any kind of pedophilia in our community. And [unfortunately] the Agudah and these rabbis with them are backing these pedophiles on a very, very bad level.”

He referred specifically to the case of Rabbi Yehuda Kolko, who is alleged to have abused what some believe could be dozens of children with impunity for over four decades, both in schools and at the Agudah-owned Camp Agudah, Inc.

At one point, the protesters got into a confrontation with Israel Lefkowitz, who identified himself as an Agudah trustee “proud to be an Agudist since 1940.” Through the open window of his car as he entered the Hilton, he told protesters that he “was against sexual harassment for all the children.”

When asked by The Jewish Week whether he thought people should report allegations of abuse directly to the police, Lefkowitz did not respond, but chided the protesters for demonstrating in public.

“We are on the same side,” he told them. “The problem [with the Markey bill] is that somebody can wake up after 40 years and say that he was molested.”

Rabbi Zwiebel said in an e-mail, “Obviously I don’t like it when people use my name and image falsely.

“But,” Rabbi Zwiebel added, “Lefkowitz is essentially right: the protesters are our brothers and sisters, and they have a special claim on our attention and conscience. We may have disagreements over specific strategies and approaches, which at least from our end we are determined to keep civil, but we need to remember who/what the real ‘enemy’ is: apathy about the underlying problem. I hope the day will come when we can all look back and say that we took steps that made a real difference.”

PROTEST AT AGUDAH DINNER
Group protests Agudath Israel of America's opposition to legislation meant to expose pedophiles.
Failed messiah was established and run in 2004 by Mr. Shmarya (Scott)Rosenberg. The site was acquired by Diversified Holdings, Feb 2016.