An "old" Postville tradition? Or an excuse to avoid communal responsibility?

Rabbi Shimon Bar Yochai was a student of Rabbi Akiva. He lived 1900 years ago in the Galilee, 600 years after Rabbi Vogel said.

Also note the sign carried by yeshiva students wearing what appear to be Agriprocessors hard hats: Despite what Postville Jewish community leaders claimed, there was no religious reason that prevented Postville Jews from participation in most of yesterday's anniversary events.

Lag Ba'Omer is not a major Jewish holiday and it carries with it no prohibitions on work or participation in secular events.

There are agendas in Postville.

One of the biggest belongs to Postville's Jewish community, which has yet to take responsibility for any of the crimes, alleged or proven, committed by some of its members and enabled by many more.

Postville's Jews used the Parade to preach to the non-Jewish population of Postville. Cars with large menorahs tied to their roofs carried signs listing the 7 Laws of Noah, the legal code non-Jews are supposed to follow according to Orthodox Jewish belief. 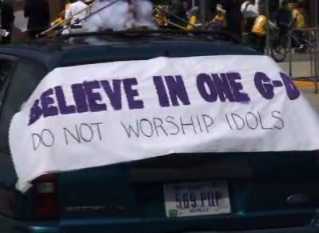 Of course, the 7 Laws forbid doing many of things the Rubashkins are accused of doing. So does Jewish law.

There are agendas in Postville.

The largest one seems to belong to Postville's Jews.

An "old" Postville tradition? Or an excuse to avoid communal responsibility?