Postville One Year After

Two reports from Iowa on Agriprocessors, the town, the landlords, and the people decimated by the Rubashkins and the raid.

Postville decimated by immigration raid one year ago
By Orlan Love, The Gazette 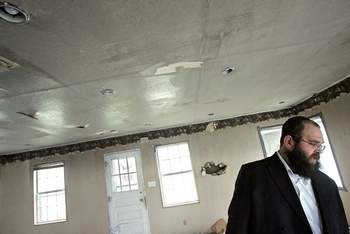 For flat-broke landlord Gabay Menahem, the dog and cat feces littering one of his many vacant rental units symbolizes post-immigration-raid life in Postville.

The word he uses to describe the litter sounds incongruous coming from a learned member of the town's Orthodox Jewish community, but Menahem can hardly be blamed for letting slip the occasional epithet. He's lost a fortune in the year since federal agents raided kosher meatpacker Agriprocessors Inc.

His 3-1/2-year-old business, GAL Investments Ltd., generated monthly revenue of $192,000 before the May 12, 2008, raid that plunged Postville into an economic recession months ahead of the rest of the nation. Now, with just 19 of his 129 rental units occupied, Menahem took in $16,000 last month — a fraction of his expenses.

Like many other Postville residents, Menahem suffers the ill effects of what local clergy describe as a government-inflicted disaster comparable to the floods and tornadoes that ravaged other parts of Iowa last year.

The arrests of 389 Agriprocessors workers and the tearing apart of their families, followed by criminal charges against plant supervisors, including former top executive Sholom Rubashkin, plunged the town's leading employer into bankruptcy and a shutdown that put hundreds more employees out of work.

"Drive down main street, and you'll see the condition of Postville. Five businesses have closed, and more are in the process," said the Rev. Paul Ouderkirk, a leader in the Catholic Church's ministry to Postville's Latino community.

Hispanic attendance at Postville's St. Bridget Catholic Church, he said, declined sharply after the raid, which led to the deportation of hundreds of mostly Guatemalan and Mexican workers.

A year later, St. Bridget's Hispanic Ministry is still caring for 30 families, most of which include members awaiting court hearings, and Ouderkirk said the ministry has hired a psychiatric counselor to help church wards cope with stress caused by the raid and its aftermath.

Departing laid-off workers, some embittered by their Postville experience, left many of the town's rental units in shambles.

Menahem's property was trashed, he said, by transients recruited after the raid, not by the longer term Agriprocessors employees who had put down roots in the community. The loss of those productive, stable and family-oriented workers may prove to be one of the greatest downsides of the raid, Menahem and Ouderkirk say.

As for GAL Investments, "The company is long gone, man. There's nothing to save," Menahem said.

"A year ago it was impossible to buy a house in Postville. Now there are 228 houses for sale out of 700 total," said Menahem, who describes the town as "a sinking ship."

Mayor Leigh Rekow, who was appointed in April after Robert Penrod resigned, said the city has struggled financially since the raid and the subsequent virtual shutdown of Agriprocessors, which employed more than 900 full-time workers a year ago and now has about 350 part-time workers.

On June 1, the city likely will be unable to make its twice-annual $167,000 payment to the U.S. Department of Agriculture on the mechanical wastewater treatment plant built specifically to process wastes from the kosher plant.

City Clerk/Administrator Darcy Radloff said the USDA has denied the city's request to defer payments for at least a year while the future of the bankrupt plant is resolved.

Bankruptcy trustee Joseph Sarachek said he is confident the plant will be purchased by a responsible new owner but acknowledged that delay is one of the strategies employed by potential buyers to drive down the price.

Rekow said the town's most pressing problems include the hundreds of vacant and deteriorating housing units; an anticipated decline in the value of housing stock, with a corresponding reduction in property tax receipts; and a sharp decline in receipts for the municipal water utility.

Radloff said the city has assessed unpaid utility bills totaling $60,000 to Menahem's GAL Investments and another $24,000 to Nevel Properties Corp., a Rubashkin-owned company in Chapter 11 bankruptcy.

The town's economic plight is further illustrated in the decline of sales tax revenues since the raid.

While Postville's total population has fallen from an estimated 2,300 to fewer than 2,000, the city's Jewish community also has shrunk, said Rabbi Aron Schimmel, a 12-year Agriprocessors employee whose kosher slaughter work has been curtailed since the raid.

Schimmel, who also directs the Judaic Resource Center in Postville, said of the 80 Jewish families in Postville before the raid, about 55 remain.

Schimmel said most Postville Jews bear no hard feelings toward the Rubashkin family, whose practice of hiring illegal immigrants precipitated the raid.

"It's illegal. Maybe you shouldn't do it, but it is how it's done in the meatpacking business. You have illegal workers all over America. If you want good workers cheap, you have to take them," he said.

Schimmel said the Jewish boys' and girls' schools in Postville still have enough students to justify continued operation. The future is less certain for the yeshiva, which educates about 40 13- to 16-year-old boys, most of whom are boarders, he said.

One community bright spot is that enrollment in Postville schools has declined only 3.1 percent after the raid, from 542 to 525, Superintendent Galen Reinsmoen said. "We could gain 40 to 50 students by next fall if the plant goes back to full production," he said.

A level of quiet anxiety born of suffering and uncertainty grips many Postville residents, said Maryn Olson, a coordinator with the Postville Response Coalition, a group established after the raid to help its victims.

Though some have said the raid was necessary to depose exploitative owners of the Agriprocessors plant, Olson said Postville would not wish a similar raid on any other community.

"I don't think anyone will ever look back and say it was a good thing. This is a community that is deeply hurt and grieving," she said. 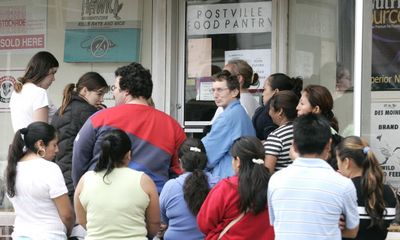 Line waiting to enter the Postville food pantry May 6, 2009.

POSTVILLE, Iowa — People fill the sidewalk outside the food pantry every Wednesday as downtown Postville’s businesses wake up and open their doors.

Since Agriprocessors, the town’s kosher meatpacking plant, declared bankruptcy in November, it’s about the only reason people fill downtown. A mix of longtime residents and Latino immigrants arrive to grab numbers to ensure they walk the aisles first when the pantry opens in the afternoon.

They grab valuable rations of cooking oil, sugar and soap that fly off the shelves, leaving less desirable fare for the rest — canned meats, fruits and vegetables.

“The line is so long even if you come early,” said Magdalena Toj, a former Agriprocessors worker who waited in the rain with her child last week.

But like the rest of Postville, Toj is tired. She is tired of waiting in line, tired of not working and most of all, tired of an uncertain future.

“When it’s sunny, raining or cold, you’re out here, because if you come later you don’t get anything good,” she said.

A year of uncertainty has taken its toll on the small town. Postville’s mayor resigned this spring in frustration and exhaustion. City leaders, churches and passionate volunteers have struggled to work together behind a unified vision for the future of Postville.

“I would have thought as we approached the one year anniversary we’d be a lot further along,” said Jeff Abbas, general manager of Postville’s community radio station.

Residents find themselves starting from scratch in their efforts to live up to Postville’s motto, “Hometown to the World.” They worked hard to build a comfortable, easy trust with neighbors who hailed from every corner of the globe, a community they saw go up in a cloud of federal agents and arrests a year ago.

“Trust is hard, especially when this community has been so challenged and shaken to its foundation,” said Maryn Olson, coordinator for the Postville Response Coalition. “There are so many unknowns. The emotional burden of waiting and not knowing is hard.”

Longtime residents said they have grown increasingly anxious watching the plant’s government-appointed executive struggle to find a buyer, which they hope will save the town’s once vibrant economy.

Federal authorities grabbed less than half of the workers than they anticipated on May 12 last year, so many immigrants not caught in the raid remain in Postville living underground. Without jobs at the plant they can’t find work and don’t have the means to move on or even return to their home countries.

On a muggy morning after a spring thunderstorm, Carol Deering sat in her garage as three Guatemalans with three strollers meander up to her sale.

Some residents say the raid brought a much-needed cleansing of lawlessness at the plant, but most everyone questions the cost. Deering said she grows sad when she thinks of all the devastated lives since the raid.

“I think as you look around our town and you see all the empty houses and empty buildings downtown it’s sad. We had a nice community here,” she said.

The children gravitate towards a shiny bike helmet and slap it with their tiny hands. The mothers hold up T-shirts to their chests, keeping one eye on the kids.

Sylvia, 22, admitted since the raid an awful thought has crossed her mind: It would be easier if Alejandra, her 1-year-old daughter, was not with them.

A former Agriprocessors worker, Sylvia declined to give her last name because she immigrated illegally. Her husband has been in jail, presumably awaiting deportation, since March, when police near Vinton pulled over the car he was riding in.

“After the raid, all the doors shut to us,” she said.

The stakes are just as high for the hundreds of Jewish people still in Postville, said Aaron Goldsmith, a former city councilman. Jewish families bought homes, and rely on Jewish schools, grocery stores and a synagogue to maintain their lifestyle.

Jewish workers at Agriprocessors worked for months without pay, and took backbreaking jobs formerly filled by immigrant workers in a failed attempt to rescue the plant.

“To some degree, there’s an even deeper fear about the future. What is a ritual slaughterer going to do without a job at Agriprocessors? He can’t become an accountant or work at Walmart. He’s finished. He’ll pack up and leave,” he said.

Despite the struggles, the will to recover is strong. St. Bridget’s Catholic Church continues to work around the clock to help the community’s immigrants pay for food and rent. The city has teamed up with the Postville Recovery Coalition to offer a home rehabilitation project to clean up yards and homes uninhabited for most of the past year. The University of Iowa’s Institute of Public Affairs recently started working with town residents to develop a strategic long-term plan for Postville.

Amid all the recovery efforts, a feeling of treading water in a storm permeates everything.

Kim Schutte, a carpenter in Postville, fixed up a funeral home just east of downtown last week. Between trips to his car for supplies, he said he thinks about his future everyday. He tries not to imagine what many consider a doomsday scenario:

“If the plant closes and leaves, there’s going to be...I don’t know what’s going to happen,” he said.

Abbas, radio station manager, is one of Postville’s voices pushing for the town to imagine life after Agriprocessors. To whomever will listen, he broadcasts his vision of a publicly owned plant that processes specialty meats, everything from kosher to organic chicken.

Yet he admits even the best-laid plans will gather dust until Agriprocessors is sold or shut down.

“How can we move forward if we don’t know what we’re moving forward from?” Abbas said.

Postville One Year After

Two reports from Iowa on Agriprocessors, the town, the landlords, and the people decimated by the Rubashkins and the raid.