Israel's capital of secularism was once chock full of hasidim. 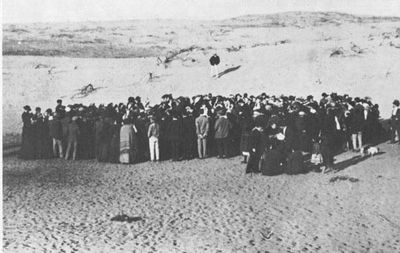 Tel Aviv centennial forgets city was once the capital of Hasidism
By Shlomo Shamir, Ha'aretz

In all the events commemorating Tel Aviv's centennial, one unique chapter of the first Hebrew city's history was left out - for nearly half a century the city served as a center of the Hasidic world. 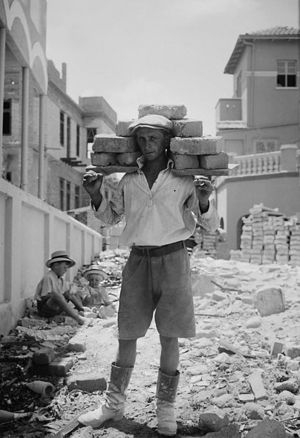 For whatever reason, the centennial's organizers missed the fact that Tel Aviv was the preferred place of residence for senior Hasidic rabbis and their followers; they created a world whose size and quality easily compared to the communities of Central and Eastern Europe before the Holocaust.

From the early 1930s to the 1970s, more than 20 senior Hasidic rebbes (admorim) lived in Tel Aviv. Some of them were famous Hasidic leaders who immigrated to Israel and kept alive dynasties from Eastern Europe. They settled in Tel Aviv, not Jerusalem, believing it to be a good place to rebuild.

Some of these admorim were considered tzadikim - exceptionally righteous men - and capable of "acts of salvation." They even consulted non-religious people during tough times, visiting them in their homes. Sometimes Tel Aviv's non-religious would wait for the tzadikim's "office hours" to receive a blessing and word of advice.

Shavuot falls on the day commemorating the founder of the Hasidic movement, Rabbi Israel Ben Eliezer - the Baal Shem Tov, who died in 1760. Many consider the holiday the right time to remember that the first Hebrew city, the stronghold of Israeli secularism, was also the country's first Hasidic city.

But this title began losing its meaning in the late 1960s and early 1970s, after some of Tel Aviv's most famous admorim died.

In addition, the Hasidim's numbers were growing, so they needed places to set up neighborhoods and large study centers. Bnei Brak eventually took over as a center of the Hasidic world.

Nearly all important Hasidic communities originating in Poland and Ukraine had "representations" in Tel Aviv, and nearly all neighborhoods in the city had a resident admor, around whom Saturdays and holidays became festivals of prayer and Hasidic music.

Tel Aviv proved especially attractive to the admorim of the Radzin dynasty which, until World War II, was one of the largest and most important in Eastern Europe. The admor of Hosiatin, Rabbi Yisrael, immigrated to Israel in the 1930s and lived on Bialik Street. He was considered a tzadik and received many visitors. The Admor of Sadigura, Yaakov Friedman, set up a Hasidic court on the corner of Ahad Ha'am and Nachmani streets.

The Admor of Ozharov, Rabbi Moshe Yechiel Epstein, lived and studied on the first floor of an apartment building on Rothschild Boulevard, near Hashmonaim Street. He was famous for his writings and Torah expertise.

The Admor of Wiznitz, Rabbi Haim Meir Hager, lived on Lilienblum Street; he was known for his Hasidic music. Hundreds of people would come to his home every Friday to hear his prayers and music. The admor later left Tel Aviv for Bnei Brak, where he set up a large Hasidic neighborhood.

In south Tel Aviv lived the Admor of Modzitz, Rabbi Shmuel Eliyahu, who moved to a large study center his community built on Dizengoff Street. He was well known for his Hasidic music. The Admor of Lelov, Rabbi Moshe Mordechai Biderman, was a tzadik known for his asceticism.

Less famous admorim also lived in Tel Aviv, including the admorim of Boyen, Bohush, Slonim and Strikov. Each had an informal prayer hall, which was also attended by religious neighbors who were not Hasidim.

Rabbi Aharon Rokach, the Admor of Belza, played a key role in bolstering Tel Aviv's standing among the Hasidic community. He came to Israel in 1944 and shocked his followers by refusing to live in Jerusalem. He called Tel Aviv "the Holy City." Rabbi Rokach did not explain his decision. His followers say he opted for Tel Aviv because it did not have any churches.

The Admor of Gur, Rabbi Avraham Mordechai Alter, opted to live in Jerusalem, but the vast majority of the Gur Hasidim who moved to Israel before World War II lived in Tel Aviv.

Just as notable, the Hasidim's presence in Tel Aviv has been characterized by mutual respect and tolerance with the secular community.

Bnei Brak – a poor suburb of Tel Aviv, founded in 1924 as a Polish hasidic agricultural settlement.

The Belzer Rebbe and the Holocaust: Part 1, Part 2.

Israel's capital of secularism was once chock full of hasidim.