Basically, it works like this. Gateways has a brochure for its Shavuot retreat: 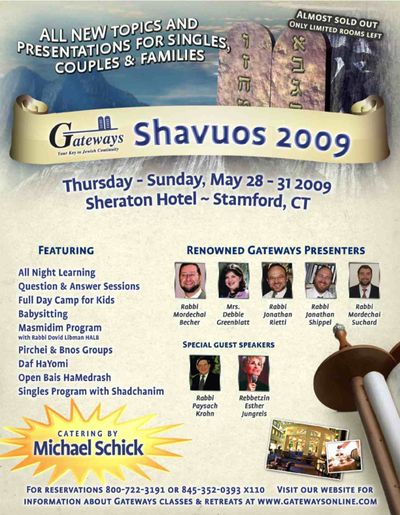 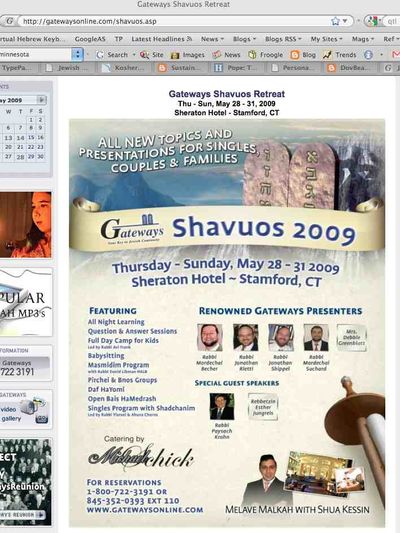 As you can see, the faces of the two women have been removed.

This follows similar censorship from Israeli haredi newspapers, which refused to print Tzipi Livni's picture when she was Foreign Minister or a Prime Minister candidate, and the defacement of billboards and posters throughout Jerusalem by haredi zealots who painted out women's faces and bodies.

Elana Sztokman has a rundown of recent haredi mysoginist activities:

Although the notion of “separate but equal” was formally dismissed in the United States back in the 1950s under the understanding that separate is not equal, the concept still retains a fiercely resistant presence in certain sectors of Israeli society. I am referring not to racial but rather to gender segregation, particularly in the Jewish ultra-Orthodox segments of society, much of which has spilled over into public spaces as well.

Over the past few months, Israeli society has witnessed a whole series of newly constructed practices for what are undoubtedly extreme views of the need for gender segregation:
• Separate sides of the street designated for a Sukkot holiday public festival in Jerusalem.
• The corpse of a woman removed from its burial place because it was next to a man in Tiberias
• Separate cashiers at the supermarket for men and women in Ramot.
• Separate public buses for men and women in Bnei Brak, Jerusalem, and more
• Separate El Al airline flights for men and women
• Separate offices for men and women in Modi’in Illit (some companies will not hire women in a company where men work)
• Separate exit times from synagogue in Safed (women were locked inside until all the men left)
• Banning of women from cemeteries in places including Elyachin, and silencing of women’s cries of mourning.
• The removal of all pictures of women from public advertisements – even women politicians, like Kadima head and former prime ministerial candidate MK Tzipi Livni
• The Photoshopped “erasure” of women cabinet members from Orthodox newspaper photos
• The covering up of dancers during a bridge opening ceremony in Jerusalem.
• Soldiers walking out of an army convocation ceremony because women were singing.
• Separate sections in the pharmacy for men and women in Bnei Brak.

This is all in addition to what have been “standard” practices for years in Orthodox communities all over the country: separate schools, separate preschools, separate colleges, separate sections in synagogue, separate dancing and eating areas at weddings and other affairs (in some communities, men and women are in separate buildings), and of course separate beaches and swimming times (actually, in Modi’in Illit, only boys are allowed to go swimming).

These practices are often justified on grounds of maintaining sexual “propriety,” but I submit that there is more at stake here. These are not expressions of sexual abstinence but of the removal of the female from the public sphere, and from the “male” world. It is about men creating a space free of all women and girls, as if women and girls are contaminated, dirty, evil, sinful, and threatening to “society” – read, men.

Indeed, one of the troubling differences in recent activity is the extension to the public sphere – including buses, supermarkets, streets, cemeteries, public army ceremonies, and of course airplanes. The idea that a bus or plane can be “hijacked” by the distorted gender ideas of religious extremists is a deeply disturbing eventuality, one that signals the desire on the part of the religious fringe to control all spaces in Israel. This is the Jewish version of the Taliban…

As the Gateways incident shows, this perverse, thuggish darkness is has crossed the ocean and landed on our shores.

There was a time when American haredism was almost moderate. That time coincides primarily with the prominence of Rabbi Moshe Feinstein. We now live in an era when Rav Moshe's rulings are increasingly ignored as haredism lurches further to the right.

While American haredim know about and study the ruling of Israeli haredi rabbis, the reverse is much less true.

You can see an example of this in this recent Jerusalem Post article:

The First Word: A day in Jerusalem
Yehudah Mirsky , THE JERUSALEM POST

The sword without and terror within (Deuteronomy 32:25)

Nobody who has lived in Jerusalem in recent years needs any educating about the sword from without. A week ago Thursday I discovered the terror within. It coils through Jerusalem's streets, and us.

Usually I'm not one for rallies. I don't like to shout, and waving placards isn't me. But I went to the Shmuel Hanavi neighborhood on the outskirts of Mea She'arim for the counterdemonstration to a large haredi demonstration on behalf of the inauguration of several sexually segregated public bus lines. Tzniut (modesty) is a noble and crucial idea, an ethical relation in which I recede in another's presence and refrain from imposing myself and erasing his or her essential dignity. I have thought for some while that the relentless, in-your-face sexuality of Israeli society and the recent taking of the age-old ideal of tzniut to hitherto undreamed of extremes are two sides of the same coin.

And one of those extremes - sending women to the back of the bus - will be, I fear, just the beginning. Segregated public transportation, segregated streets, segregated stores, and this is not "separate but equal." Regarding all women as sexual objects, in all places, at all times, degrades them but it degrades men even more, making them into nothing but sexual predators-in-waiting.

The demonstration took place on the spot where a horrific bus bombing in August 2003 took 23 lives, mostly haredim, including seven children and one Filipino guest worker; in recent years, the bombings have come to be seen by some in the haredi community as, inter alia, divine retribution for the intolerable commingling of the sexes on Jerusalem's buses.

I WAS WITH a counterdemonstration, organized on very short notice by a law student, Avital Feldman. We were about 20 people, some religious, others secular. The de facto leader was newly-elected councilwoman Rachel Azaria from the Wake Up Jerusalem movement. We stood on the side of the large street on which the demonstration was taking place, its numbers swelling swiftly into the hundreds early on. A few had brought signs, some religiously-inflected ("We are also created in God's image"), others straightforwardly political ("Don't turn Israel into Iran") and one self-parodyingly intellectual ("Stop the eroticization of public sphere" - come to think of it, the one sign the haredim there might have agreed with).

THE AIR FILLED with menace and fast. Our presence was provocative enough, but the responsum was a flash point, because we moved out of our circle to hand them out and because this seemed to turn us from merely depraved sex-maniacs into dangerous heretics. They were snatched from our hands and torn to pieces, amid shouts of "Heretics!" "Reformim!" "Hypocrites!" and a line from the Talmud: "A Sefer Torah written by a heretic must be burned." Pushing, shoving, screaming, all very quickly and before long it seemed it would get really ugly.

A few hesder graduates, braver than I, ventured into the heart of the mass. The large crowds around us moved away only when the speaker on the podium up front announced - wisely enough - that "shmiras eynayim" was in full force and so it was forbidden to look at the women among us, and besides we were best left ignored. Still more and more people poured into the street and we were surrounded.

The police wanted us to move to the far side of Route 1 and to get us to do it, took two of us into custody, releasing them only when we moved (and that, a couple of hours later). I understood the bind they were in, and their concern for our safety, even as I resented seeing once again that threatening violence gets you what you want, which in this case was us and our copies of Rav Feinstein's responsum out of sight.

We should have planned better. And perhaps we, or I at least, were naive here. But what really shook me up was the speed with which things got ugly and would have gotten even more violent had things gone a little differently, how the violence was like gasoline in the air, just waiting for a spark. Looking back across the avenue at the crowd, Zehava said to me: "If this is how they were with us, what would they do to a woman who didn't want to sit in the back of the bus?"

THAT EVENING I attended the wedding of a colleague at a kibbutz in the Sharon, and like so many Jerusalemites who venture out of our shell, the rich smell of the earth and succulent heaviness of the air just stunned me. Back in Jerusalem at midnight, I went to a dear friend's birthday party in Musrara, and the good conversation seemed to provide a welcome end to a long and exhausting day. At about 1:30 a.m. I headed to Jaffa Road to pick up a cab. Walking across Kikar Safra, seeing clumps of men sitting and drinking, I quickened my steps. As I came out of the plaza, right across the street from city hall, I saw four men jump, stomp and kick the daylights out of several others (Lord knows why) and run off.

I called for the police and waited for them to arrive as people ran out of the surrounding pubs to help the crushed victims, whose blood ran down the sidewalk.

First ambulances came - some of the EMTs were haredim, and some were women. Then came the police, and I reported to them what I'd seen. After the police left, some young haredim came up to me, hungry for details: Did you see fists? Did you see a knife?

I told them how earlier in the day their comrades had nearly done the same to me. "There was action at the demo? We missed it?"

We talked a few minutes more. One of them had never heard of Rav Moshe Feinstein. And when his friend assured him that this was a big rav indeed, and I said that he had ruled it permissible to ride on buses with women, he was incredulous and a little intrigued.

The writer lives in Jerusalem. He is currently writing a biography of Rabbi Abraham Isaac Hacohen Kook.

As a former Jerusalemite who made a few very weak attempts to stop this craziness, I agree: the Jerusalem of my dreams is dead. But so are Brooklyn and Monsey, sucked backward into a primitive vortex of superstition and hate in the name of modesty.