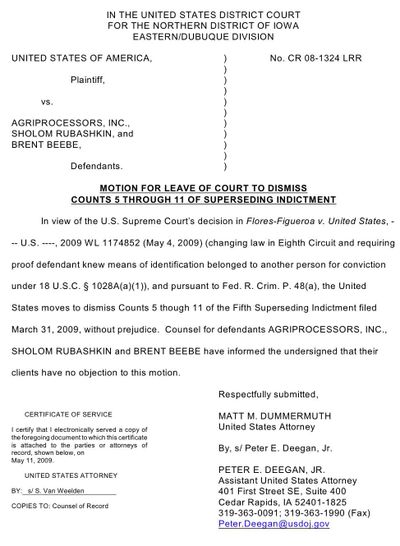 CEDAR RAPIDS, Iowa (AP) -- The government is seeking to dismiss identity theft charges against the former vice president of a kosher meatpacking plant in Postville.

The men are named in a 79-count indictment filed in March that also charges Rubashkin with immigration, bank fraud, money laundering and willful violation of order of the secretary of agriculture charges.

Rubashkin and Beebe were both charged with aiding and abetting aggravated identity theft.

The government's motion follows a similar motion by Rubashkin's attorney last week after the U.S. Supreme Court ruled that undocumented workers who use phony identification can't be considered identity thieves unless they knew they were using ID numbers from real people.