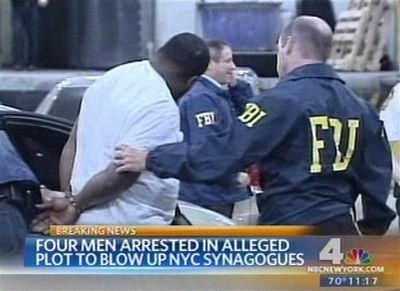 Four men who planted what they believed were bombs outside two Riverdale synagogues Wednesday night were arrested before they could escape, police announced in a late night press conference.

Authorities said a federal agent had infiltrated the group and that the FBI -- which had the men under surveillance for a year -- arrested them in their car before they could flee the scene.

Rabbi Judith Lewis, spiritual leader of the Riverdale Temple, one of the two targeted synagogues, said she was in the synagogue Wednesday evening attending several meetings and was unaware of the drama unfolding outside.

"I was inside the sanctuary until 8:30 and when I went to the lobby I saw two men," she said. "I was about to ask them to leave when they identified themselves as police officers. They said police action was taking place and they asked us to leave through the back of the building."

She said the officers carried a picture of a suspect they said they had arrested.

"It seemed very well planned like they knew every last detail [of what was happening]," Rabbi Lewis said of the police.

Authorities said the group, which they identified as "home grown terrorists," had also planted "bombs" around the Riverdale Jewish Center about three blocks away. And they said the men had also placed "bombs" under cars parked in front of the Riverdale Temple and had planned to detonate them by remote control.

The "bombs," in fact, were fake devices that were constructed in the lab by FBI technicians.

Authorities said the men were angry over the U.S. war in Afghanistan and had voiced hatred of Jews. All were born in the United States. The alleged ringleader is the son of an Afghan immigrant and the other three are reportedly jailhouse converts to Islam.

Rep. Peter King (R-Long Island) told CNN that the suspects were associated with a mosque in upstate Newburgh.

Rabbi Lewis said she was "relieved" to learn that authorities had the men in their sights all along.

"The police clearly did their job efficiently and graciously and really kept everyone calm," she said. "They made sure there was no panic on the part of everyone in the vicinity."

This was the second attack on synagogues in Riverdale in the last several years. The Conservative Synagogue of Riverdale was attacked with Molotov cocktails by Islamic extremists. The bombs struck the front door and extinguished itself, causing minimal damage.

The alleged ringleader was identified by authorities as James Cromitie. The other three were identified as David Williams, Onta Williams and Laguerre Payen, all of Newburgh, in Orange County.

APNewsBreak: 4 arrested in plot to bomb NYC temple
By TOM McELROY – 11 minutes ago

NEW YORK (AP) — The FBI arrested four men Wednesday in what authorities called a plot to detonate a bomb outside a Jewish temple and to shoot military planes with guided missiles.

Officials told The Associated Press the arrests came after a long-running undercover operation that began in Newburgh, N.Y., about 70 miles north of New York City.

James Cromitie, David Williams, Onta Williams and Laguerre Payen, all of Newburgh, were charged with conspiracy to use weapons of mass destruction within the United States and conspiracy to acquire and use anti-aircraft missiles, the U.S. attorney's office said.

The men had planned to detonate a car with plastic explosives outside a temple in the Bronx neighborhood of Riverdale and to shoot military planes at the New York Air National Guard base at Stewart Airport in Newburgh with Stinger surface-to-air guided missiles, authorities said.

In their efforts to acquire weapons, the defendants dealt with an informant acting under law enforcement supervision, authorities said. The FBI and other agencies monitored the men and provided an inactive missile and inert C-4 to the informant for the defendants, a federal complaint said.

The investigation had been under way for about a year.

Cromitie also expressed an interest in doing "something to America," they said in the complaint.

In October 2008, the informant began meeting with the defendants at a Newburgh house equipped with concealed video and audio equipment, the complaint said.

Beginning in April 2009, the four men selected the synagogue and the community center they intended to hit, it said. They also conducted surveillance of military planes at the Air National Guard Base, it said.

Rep. Peter King, the senior Republican on the House Homeland Security Committee, was briefed on the case following the arrests.

"This was a long, well-planned investigation, and it shows how real the threat is from homegrown terrorists," said King, of New York.

Sen. Charles Schumer, D-N.Y., said if there can be any good news out of this case it's that "the group was relatively unsophisticated, penetrated early and not connected to any outside group."

The defendants, all arrested in New York City, were expected to appear in federal court in suburban White Plains on Thursday.

They were jailed Wednesday night and couldn't be contacted for comment. The FBI didn't immediately return a telephone message Wednesday night seeking information on whether the men had lawyers.

Posted at 12:36 AM in Current Affairs, Religion, Religion & State | Permalink