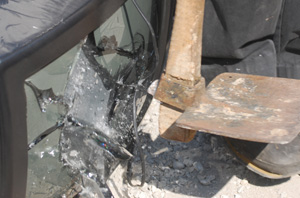 Here's how one English-language haredi source describes the event:

On Shavuos Israel received the Torah – Unfortunately, Israel also sinned with the golden calf.
Tomorrow at 3:30pm (8:30am EST) people will gather at the square in Rosh Haayin (center of Town) with their TV sets and hammers…
The people who decide to join… will now destroy the “golden calf” in public to make a kidush Hashem. [Sanctification of G-ds name]
(i.e. by smashing their TV sets in public)
Few things about TVs
1. Often brings strife to the home.
2. Causes people to ignore other family members.
3. It displays murder, promiscuity, violence and cursing right in your living room.
The list goes on… I think it is known that TVs are unhealthy to the Jewish soul and for the Jewish Family…it’s possibly a big challenge to get rid of it too…. Therefore the reward is even greater for those who do.
I think we should organize this type of thing for Jews all over the world…
Before Shavuos this is Great News for Israel.
And especially for those tzadikim who are going to bust their TVs in public – What a big merit for them.
Ashreichem Yisrael!

He finishes off the post by noting the event ended "successfully." Maybe next week they'll burn copies of Ha'aretz, Encyclopedia Judaica, and printouts from blogs. Maybe they already have. After all, it's easier not to know.
Video of the TV smashing.
[Hat Tip: Aharon Varady.]